Mercedes-AMG One is almost ready for production

After many difficulties that Mercedes engineers did not initially estimate, the Mercedes-AMG One is about to enter series production.

The car was delayed due to problems with the hybrid propulsion system taken over from Formula 1 and because of emissions regulations.

The V6 Formula 1 engine set for F1 racing has idle speed at 5000 rpm, and the street version of the same engine had to have idle speed at 1200 rpm. The V6 engine runs at an extremely high speed of 11,000 rpm and not only for this reason, it needs a complete overhaul at only 50,000 km. The propulsion system consists of the thermal engine and no less than 4 electric motors.

Few details about the V6 engine: because of very high revs, the camshafts are not driven by the belt but by spur gears. Also due to high speeds, the mechanical valve springs have been replaced by pneumatic valve springs. The thermal engine drives the rear axle while the front axle is driven exclusively electrically by two electric motors, one on each wheel, that develops 120 kW each.

The turbo and the compressor are connected by a shaft that has an electric motor of about 90 kW. Depending on the driving mode, it can drive the compressor up to 100,000 rpm, so there is virtually no turbo lag. In Formula 1 the name of this electric motor is MGU-H. (motor generator unit heat).

This MGU-H electric motor has a second role: it uses part of the surplus energy from the exhaust system to generate electricity which is stored either in the Li-Ion battery located under the front seats or is used to power an additional electric motor. This engine produces 120 kW and is connected to the engine’s crankshaft through a spur gear. This engine is called in Formula 1 MGU-K.

The power available at the front axle is 2×120 kW while at the rear axle the power is over 500 kW. In total, the power reaches over 740 kW or over 1006 HP.  The heat engine delivers power to the rear wheels via a 7 speed automatic gearbox with four-blade carbon clutch. 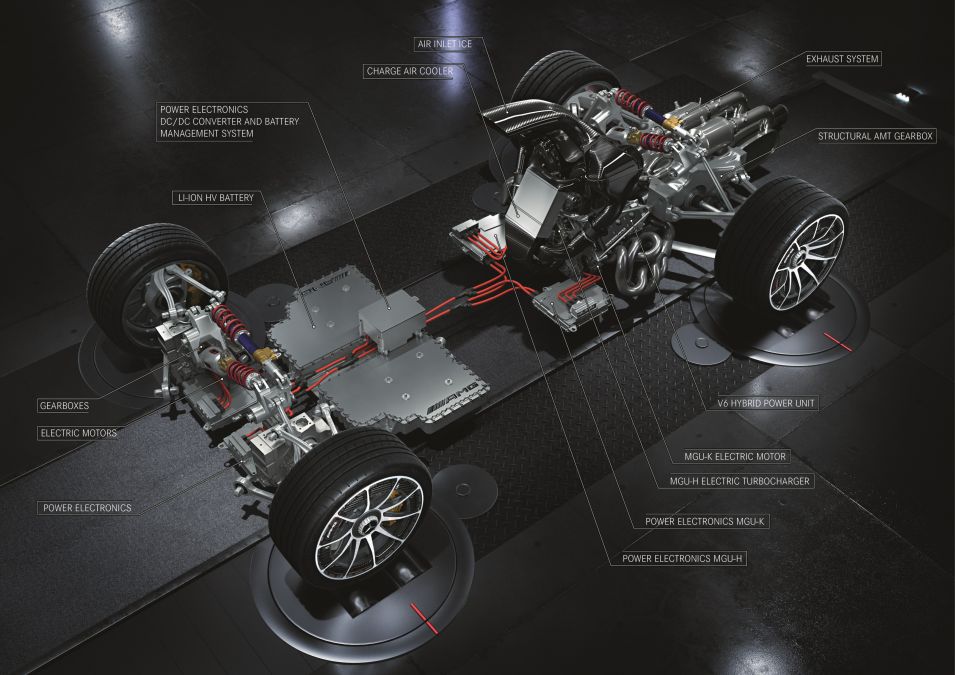 In essence, the Mercedes-AMG One is a PHEV model and can be driven full electric for a distance of 25 km.

The driver can choose between five driving modes from pure electric, hybrid, to Race and Start 2 (similar to the qualifying mode in Formula 1).
With a mostly carbon construction, the two occupants sit in sports seats lined with Alcantara and the steering wheel and pedals are adjustable. The driver can also choose between Highway and Track modes plus hydraulic control of the ground clearance on a 50 mm travel and three different settings for suspension.

The Mercedes-AMG One has active aerodynamics with flaps under the flat floor that direct the airflow to the rear diffuser. The rims are available in two versions: forged or magnesium. The titanium aileron is hydraulically adjustable in many positions and does not lack the DRS position from Formula 1 which is activated from a button on the steering wheel.

Mercedes did not announce the kerb weight of AMG One and we are curious if it will be lighter than McLaren F1 which did not exceed 1000 kg.