This boxy one of a kind car continues to thrill people even 25 years after it first appeared back at the start of the 90’s, as this anniversary test by AutoBild Germany clearly proves it.

This car was a game changer. It’s a perfectly functionable saloon capable of reaching 250 km/h and with a 7,700 rpm red line. Oh, and a rear wing so large it needed its own zipcode. If you were a young father, a kid who just got his driving license or any other kind of warm blooded being in the spring of 1990, then this was the car you wanted.

I wouldn’t be surprised if some of the AutoBild journalists who wrote this anniversary test fell into one of these categories and this 25 years later ride was something of a dream come true. I was still playing with toy cars back then, but I would still love to get my hands on one of these legends.

Not an easy thing to do, mind you, since there were only 502 units of the Evo II ever produced. And as fi this weren’t enough, there’s also the little inconvenience of the price: DTM pilot Roland Asch recently wanted to buy his old “company car” and was presented with a 100,000 euros plus request from the current owner. And I’m no Roland Asch, either, so the price might be even higher than that. 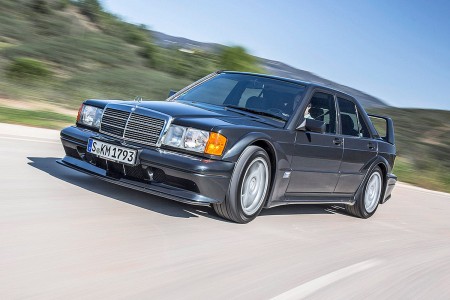 Back to the people who actually drove it, they were very glad to discover the 190 E 2.5 16 Evo II doesn’t need a racetrack to show everything it’s capable of – a barren motorway will do just fine.

The high revving four pot engine will go as high as 60 km/h in first, second goes well beyond 100 km/h, third comes in at 150 km/h and the Mercedes-Benz engineers don’t advise to go into fourth before 200 km/h. This is perfectly explainable through the car’s power curve, which shows the maximum torque of 245 Nm becoming available only at 5,000 rpm, while power peaks out at 7,000 rpm. The engine is begging to be revved and you’d be a sucker not to comply. 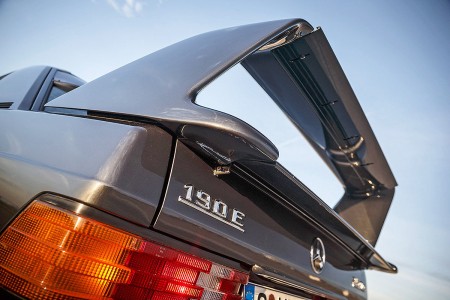 Under 4,000 rpms, though, the 190 E 2.5 16 Evo II is a very decent car, tame enough to be driven slowly on a daily basis. It’s almost as if that 4,000 rpm threshold is there to keep the beast from running rampant every time you switch the ignition on. It’s tempting to go over with every gear change, but that would mean you’re experiencing just one of the car’s personalities.

After just a few kilometers in the 190 E Evo II and the fabulous DTM record of the car is perfectly explainable: 16 wins of the 24 races entered, lots of points, poles and fastest lap times – a record unmatched by any other car since then. 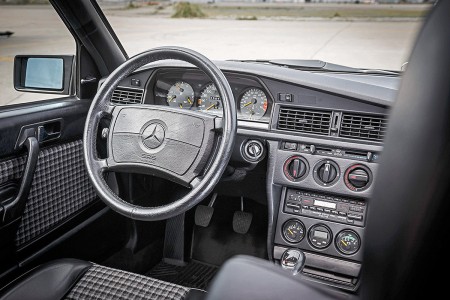 Next to a modern AMG model, the 190 E 2.5 16 Evo II’s 245 hp might seem like a punny figure, but it doesn’t do justice to the whole experience of the car. It’s a raw, visceral thing, a car that’s both light and fast and offers the kind of human/machine interface rarely seen in today’s vehicles. It’s 25 years old this month, but it doesn’t feel old.