Lewis Hamilton has just returned online after two months of staying away from social media. “I’m back”, he wrote on Instagram. Almost 27 million people follow him on the social media network.

This is the moment that fans have been waiting for, for almost two months. Lewis Hamilton posted photos and videos of him on his Instagram account. The last time he talked for F1 enthusiasts or online for his followers was December, after the title loss heartbreak in Abu Dhabi. His last interview was on December 12 and his last Instagram post was eight weeks ago. That was a photo of him standing glorious in front of team, after his win at the Arabian Grand Prix. But that was on December 6 in Saudi Arabia, one week before the-winner-takes-it-all season finale.

Now he has returned online showing what seems to be a photo of him at the Grand Canyon. He’s wearing a sweatshirt and baggy colorful pants and sitting on the edge of a cliff. “I’ve been gone. Now I’m back!”, Lewis captioned the photo. There is a column of seven rocks right next to him and fans went as far as saying that those are the seven Formula 1 World Championship titles that he achieved. Lewis is now pushing for number eight. Almost 2.3 million followers have already clicked the “heart” button to show they liked the image. 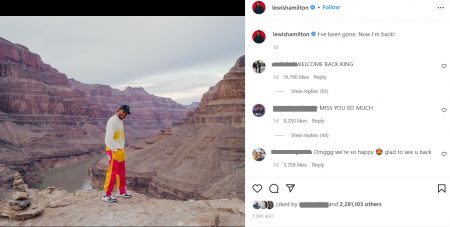 And that’s not the only sign he’s back. Lewis also posted a video of him jogging along the streets of London, getting ready for the official reveal of this season’s car, on February 18. He will be then heading for Barcelona for pre-season testing that starts on February 23.

He is back in England after a long time spent in the U.S. About 24 hours ago, also on his Instagram Stories, the 37-year old posted a photo of the sunset in Manhattan. (Check PHOTO GALLERY).

The Mercedes-AMG Petronas driver also changed his Instagram profile photo. He put a photo of himself sporting an Afro hairstyle and a black winter jacket with a bright red background. This photo replaces the one of himself as a baby that he still has on Facebook.