Gronos 2021 – Mansory built a half a million euro G-Class

Mansory built a half a million euro G-Class. It is the Gronos 2021 and it got the extra power and the enhanced looks that the tuner has accustomed us with.

Gronos is the designation that Mansory has been using to redefine the G-Class modified versions since 2013. Now here comes the Gronos 2021. It is based on the Mercedes-AMG G63 performance off-roader. The model standardly comes with a 4.0-liter biturbo V8 that develops 585 horsepower and a peak torque of 850 Nm. It now got an ECU remap, two new turbos and a new exhaust system. They all took the output all the way to 850 horsepower and 1,000 Nm. 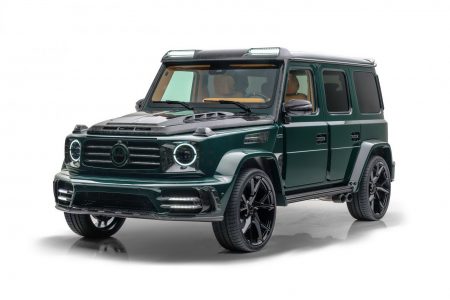 The car hits 100 km/h from a standstill in 3.5 seconds. These are figures that make it 1.0 second faster than the standard variant. When equipped with the AMG Driver’s Package, the Mercedes-AMG G63 can reach a top speed of 240 km/h. But Mansory got more from it: 250 km/h.

It was only natural that Mansory would match the extra performance with enhanced looks. So this is how the Gronos 2021 got a wide body conversion. The kit includes larger fender flares. The hood, the bumpers and the roof got new additions with a rugged look. The spare wheel case and several other parts are made of carbon fiber. Extra LED lights showed up at the front end and up on the roof. The off-roader received 24-inch with 295/30 tires.

The British Racing Green paint complete the new appearance of the car. 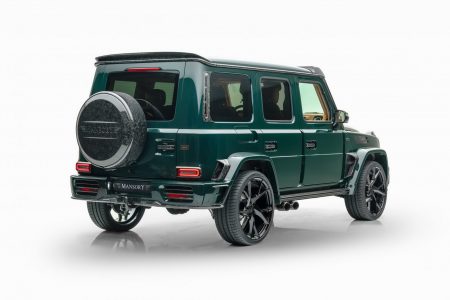 The tuning house reupholstered the cabin in brown leather, while the Mansory logo shows up on the backrests of the seats and on the floor mats. There is leather in the cargo compartment as well.

Only 10 such units will see the light of day. The German tuner indicates a gross price of €550.160 for the modified off-roader.