It is covered in satin, but it roars like a dragon! It inhales fire and exhales smoke! That is the devilish Mercedes-AMG GT S wrapped in matte black satin by Sign Mania, the Belgian company that took the Mercedes-AMG power racer one step further from its standard version. Ok, let’s make that two steps further!

The Mercedes-AMG GT saw the light of day in September 2014 at the Paris Motor Show and has been the tuner’s sweetheart ever since. This time around, black satin finish and red Dragon Stripes make the Mercedes-AMG GT S variant as intimidating as never before. 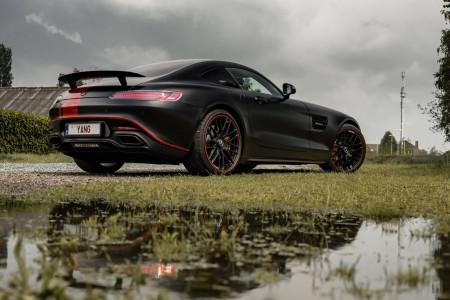 Dressed in matte satin, the racer features front air intakes, the grille, the side skirts and the rear lower fascia highlighted in the same dragon red as the stripes. The dragon red is also present in the rims of the fireball.

The Belgium-based company Sign Mania blacked out the single louver in the grille and the three-pointed star in the center for a little extra black magic.

A sports car to the bone, the Mercedes-AMG GT S with a 4.0-liter V8 biturbo heart brings onto the road a power to match its menacing looks: 510 HP.  The hair-raising dragon can hit the 100 km/h mark from a standstill in just 3.9 seconds, on its way to an exhilarating top speed of 360 km/h.