The history of the Mercedes-Benz G-Class started with a letter. Letter G. Short for Geländewagen. It started at the Magna Steyr plant in Austria, with an order received from the army of Australia. And so monster G, master G, the invincible, the all-mighty, the unbeatable saw the light of day.

It was a cube on wheels, boxy and rugged from the very start, with not a single comfort feature on the inside. It wasn’t supposed to. It was supposed to be a tank, back in 1972.

But later on, it was the idea of the Shah of Iran, at that time, a significant shareholder of Mercedes, to turn it into a civilian ride. And so it was reborn in 1979. Today, it stands as the longest lasting model of the company’s range.

From the very beginning, it snatched confidence. The Vatican ordered it for the pope. Fitted with a transparent thermoplastic top, it served as a popemobile. The “Papa G” model ended up as a resident of the Mercedes-Benz Museum in Stuttgart. 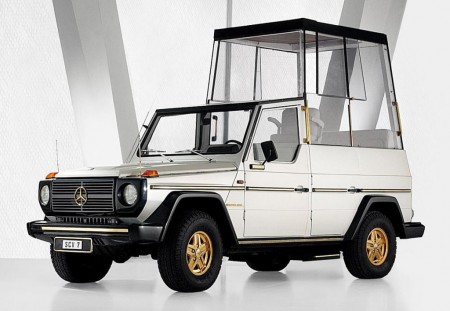 These were the engines available:

In 1981, it got an automatic transmission, air conditioning, an auxiliary fuel tank, grilles that protected the headlamps and a cable winch. The launch of the 230 GE brought the fuel injection variant on the market, together with auxiliary heating, wider tires and fender flares. 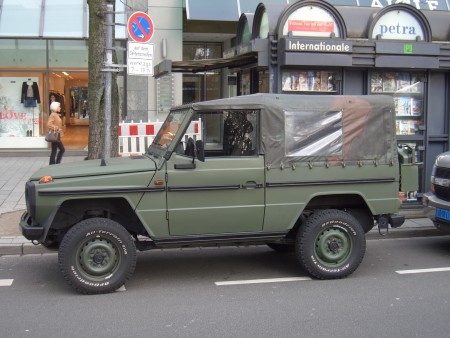 In 1985, it received differential locks, with the central door locking and the tachometer becoming standard. By 1986, over 50,000 units had been delivered.

The 461 model series, reserved for the military field, was produced from 1990 until 2001. Meanwhile, in 1990, the chassis received a complete overhaul resulting into the new 463 G-Class, with anti-lock brakes, permanent 4-wheel drive and three lock differentials. Wood trims found room at the interior and so did the optional leather upholstery. Such were the engine options:

The automatic 5-speed and 7-speed were available across the range.

In 1992, the off-roader was fitted with cruise control and a stainless-steel spare-tire cover that we can still see at the models of today. It was the year that the G hit a massive milestone: 100,000 units built in Graz.

In 1994, the off-road family got its official family name: the G-Class. Ventilated front disc brakes and an airbag for the driver turned into standard equipment.

In 1996, headlamp washers and a front passenger’s air bag were added.

In 1997, the range was once again refreshed, introducing the a convertible and two new engines, the 2.9-liter turbo diesel and the V6-powered G320.

In 1999, the model marked its 20th anniversary with a V8-powered G 500 Classic. All models then received a multifunctional steering wheel.

In 2000, the new G 55 AMG premiered as the most potent ever, at 354 horsepower. It was the moment it started turning the heads of the celebrities.

In 2001, the G crossed the Atlantic for its launch on American ground, fitted with new alloy wheels, a chrome radiator grille and body-color bumpers. It also received a more luxurious cabin. It was also equipped with the Electronic Stability Control Program (ESP), with Brake Assist and with the 4-wheel Electronic Traction System (4 ETS).

In 2004, the G 55 AMG sheltered, beneath its solid straight bonnet, a supercharged V8 capable of developing 476 horsepower. 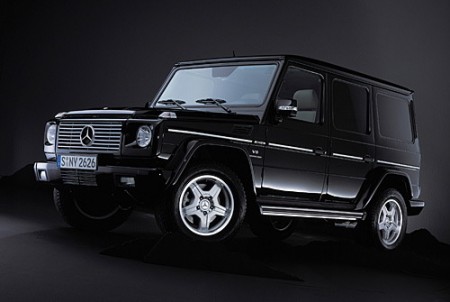 It was rumored that the end of the military contracts will also put an end to the old G production in Graz, Austria. Still in November 2005, Dr. Dieter Zetsche, a DaimlerChrysler Board of Management member at that time, announced that the Magna Steyr plant will continue to produce the G.

In 2007, the GL, conceived as a replacement for the G, saw the light of day. But it never lived up to the Mercedes executives’ plans and so the G lived on. Furthermore, the annual production grew from 4,000 to 6,000 units. 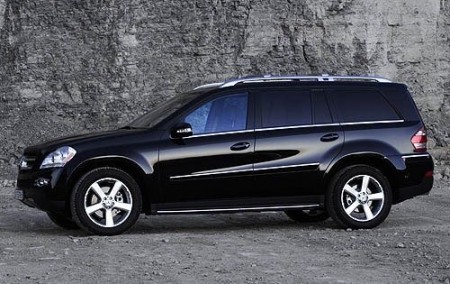 The GL was conceived as a replacement for the G-Class. It never did the job.

In 2006, a facelifted model was shown at the Paris Auto Show. The G 55 AMG became even more powerful, from 476 HP to 500. A nano-particle paint covered the boxy body for the first time. In Paris, Mercedes made the good news public. The model would live on to 2015, as military and civilian buyers kept demanding it.

In 2008, the interior was overhauled receiving a more refined instrument cluster and controls, along with the COMAND system with navigation, a rear-view camera, voice control and Tire Monitoring System. The very same year, the Vatican places a new order: a G 500-based white Popemobile. Early models included the G 320 CDI and the G 500 for all body styles: the short-wheelbase Station Wagon, the long-wheelbase Station Wagon and the Cabriolet. 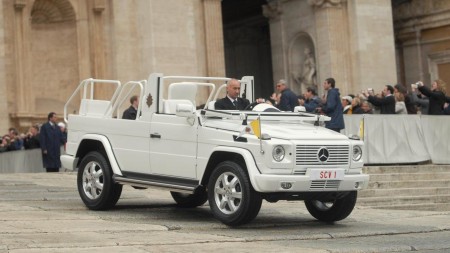 In 2009, the 30th anniversary year, the Graz plant celebrated 200,000 units manufactured there. The model received ergonomically optimized front seats, optional ambient lighting, a dashboard covered in leather, an extensive Chrome package and iPod, USB or Aux connections. Also a new set of colors became available: palladium silver metallic and designo platinum magno matt finish. The G 350 CDI replaced the G 320 and it came along with the G 500, the G 55 AMG, the G 350 CDI and the G 500.

The G 500 Guard got standing ovation in 2009. It was the armored version of the G 500 long-wheelbase Station Wagon with bullet resistance level FB6 or FB7 and fitted with a Touchshift 7-speed automatic gearbox.

The same year, at the Dubai Motor Show, Mercedes displayed the G 55 AMG KOMPRESSOR “Edition 79”, exclusively built for the Middle East. It came with the design magno alanite grey for the body, a crash bar fitted at the front, 19-inch AMG light-alloy wheels in titanium finish, seats in designo leather in black/sand and – to make it really stand out in front of the eyes of the very rich – the Edition logo “1 out of 79” at the front of the gear shifter. 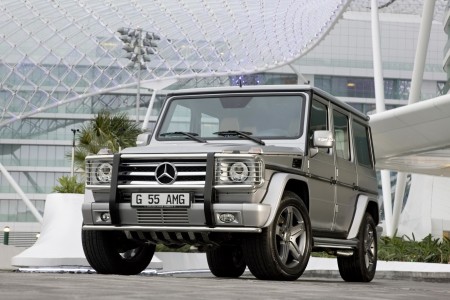 In 2010, Mercedes unveiled the G 350 BlueTEC, at the Geneva Motor Show. The diesel-powered vehicle got an AdBlue tank with a range of 12,000 kilometers, the 4ETS system, the ESP, three differential locks, permanent 4-wheel drive and a 7G-Tronic 7-speed automatic transmission. It is the first G-Class vehicle with BlueTEC Diesel engine. It includes electronically controlled traction system 4ETS, the Electronic Stability Program (ESP) and three differential locks selectable at the push of a button, permanent all-wheel drive with off-road ratio, 7G-TRONIC seven-speed automatic transmission. AdBlue tank has rated range of 12,000 kilometers.

In 2012, the vehicle was fitted with LED running lights, turn signals were put on the side mirrors and the AMG variant got new bumpers and radiator grille. The COMAND screen was relocated in the center console. DISTRONIC adaptive cruise control, blind-spot monitoring and the PARKTRONIC became standard. The models available were the G350 BlueTEC, the G500, the G500 Cabriolet, the G63 AMG and the G65 AMG, with the latter two getting the AMG SPEEDFHIFT PLUS 7G-TRONIC transmission and an AMG sports exhaust system. 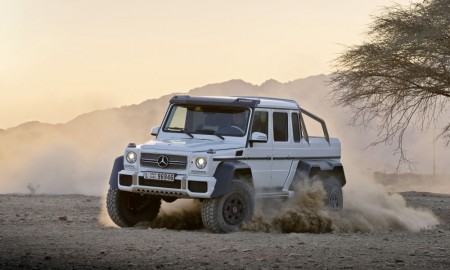 In 2013, the world stopped and stared. The G63 AMG 6×6 behemoth was then born. It featured five lock differentials, a 6-wheel drive, half a meter of ground clearance, a fording depth of one meter and it was powered by the G 63’s V8 engine. It could run the distance from 0 to 100 km/h in approximately 7 seconds and, luckily for all others out there, the 6-wheeled monster had a top speed limited at 160 km/h. Mercedes sold more units than expected and – to keep it as exclusive as possible – it put an end to production, with a little over 100 units having been delivered. 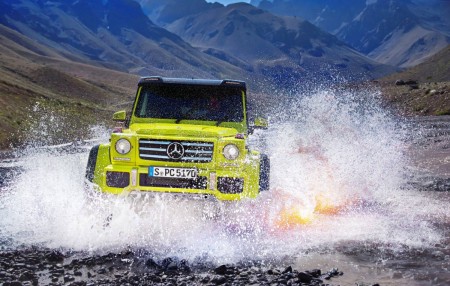 Magna Steyr is set to remain under contract with Daimler AG to produce the rugged SUV from 2015 to 2019, so we can expect more head-turning models in the near future. For the moment, we settle for the 99-unit limited edition Mercedes-Maybach G 650 Landaulet with an elongated wheelbase at 3428 mm and a folding fabric roof, a partition wall between the driver and the VIP passengers, luxury amenities. An AMG V12 biturbo engine with 630 HP put all the luxury in motion. 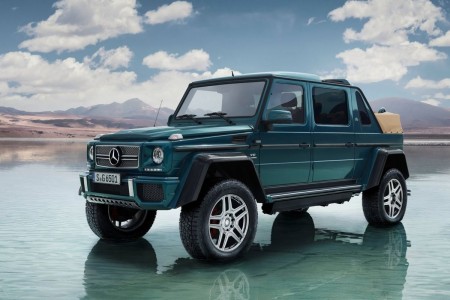 For the moment, the world stands still, holding its breath once again. The 2019 Mercedes-Benz G-Class will premiere in just a few days in Detroit.