One of a kind Mercedes-Benz crashes at Goodwood classic event

Have you ever seen grown men crying? I’m sure you would have if you happened to be present for this unfortunate crash between a Lister-Jaguar Knobbly and a Mercedes-Benz 300 SLS Porter Special at Goodwood.

The British track is famous for all the driving events it hosts, and the list of participants for this 73rd Members’ Meeting wasn’t looking too bad. Among them was a Mercedes-Benz 300 SLS Porter Special driven by the German legend Jochen Mass taking part, like all the other, in a qualifying session around the circuit.

According to those on the scene, the 300 SLS PorterSpecial ploughed into the rear of the Lister-Jaguar as it slowed down to enter the pit lane. Jochen Mass was coming out of a chicane when he spotted the slow moving Jaguar, but it was too late: he hit the brakes, but the wheels just locked and he skid into the rear of the Jaguar driven by Tony Wood The end result was a lot of noise, spilled fuel, dented cars and a lot of broken hearts.

Fortunately, nobody was hurt and both pilots were able to get out of their cars and walk to safety on their own two feet. The cars, on the other hand, had to be winched onto service trucks in order to clear the track for the other more fortunate participants.

Those reporting this atrocity (motoringresearch.com) say that the repair bills for each of the two cars could end being well into the six digit figures zone, and that’s not an exaggeration: the 300 SLS Porter Special is a unique car worth about five million euros (the car was on a lease from the Mercedes-Benz Museum collection in Stuttgart) while the Lister-Jaguar is a complete bargain by comparison, being priced at just over one million euros. 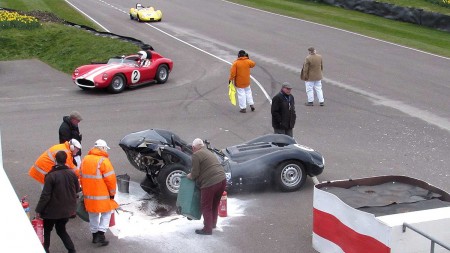 Once the debris and spilled fluids were removed from the track, the event carried on without any other incidents. At the time of the crash, Tony Wood in his Lister-Jaguar was in second, while Mass was just 22nd.

The Mercedes-Benz 300 SLS Porter Special has a very intriguing and complicated story. It came about after Mercedes-Benz cut off their very successful 300 SLR program, which prompted a lot of racing teams and amateur drivers to create their own cars based on 300 SL production vehicles.

The 300 SLS Porter Special is one of these cars, made by Chuck Porter on the basis of a wrecked 300 SL Gullwing. The styling of the car was in big part faithful to the Mercedes-Benz original, but Porter used very thin aluminium for all the body parts. 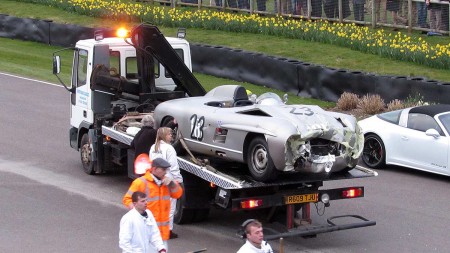 This particular car was used between 1956 and 1962 when it even stood against the Ferraris and Maseratis of that time. It received a substantial restoration in 1999 and was used in historic races ever since.

Now it seems like it will have to go spend some more time in a repair shop until it will be able to hit the tracks once again. But the important thing is that it will. Eventually…