Mercedes-Benz shows emergency vehicles portofolio at the 11th General Police Equipment Exhibition & Conference (GPEC). A total of 15 exhibits will be in Frankfurt am Main.

The E-Class 300 de Estate and the GLC F-Cell, together with the new EQC wear the police livery. The electric SUV tries on the costume for the first time, convincing with its design and technology, generous range and top safety level. With new functions in the Driving Assistance Package, such as the anticipatory speed adaptation in respect of the end of tailbacks, the EQC is also above the stringent safety standards regarding the battery and all components carrying electric current. 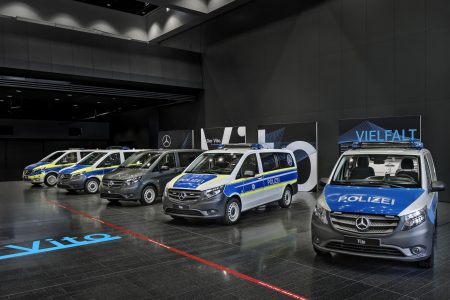 The Mercedes-Benz GLC F-CELL, running on pure hydrogen as well as electricity, is also at the Mercedes-Benz stand, as the first radio patrol car from the premium car maker to feature a fuel cell and battery drive. The vehicle has been in use by the Hamburg police force since 2019.

The plug-in hybrid E 300 de Estate comes with the company’s latest diesel engine and with an all-electric mode. The intelligent, route-based operating strategy takes into account navigation data, topography, speed limits and traffic conditions for the planned route, while the ECO Assistant coaches the driver and helps to save fuel.

The Mercedes-Benz Vito van has an impressive experience in the police force. Eight units are displayed at this year’s GPEC, all with a wide range of applications in the field. 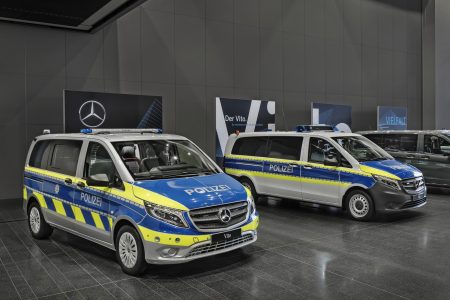 The outdoor grounds of the GPEC host the Mercedes-Benz Arocs 2543 L 6×2 heavy-duty truck with an electronic trailing axle. It is a 25-tonne platform chassis with a Meiller roll-off body. It is powered by the OM 470 LA six-cylinder inline engine with an output of 428 horsepower and 2100 Nm of torque.

The Aroc trucks belonging to the Federal Police are specifically designed and built in the Mercedes-Benz truck production plant in Wörth.