First exhibit of the Mercedes EQ family is a mid-size SUV. The lower consumption and higher range than those of the rivals are major trump cards in the battle for range and efficiency. On the other hand, agility is not its strong point. First complete review with measurements.

Differently from BMW, Mercedes-Benz chose a radical development path for the development of its electric models on a dedicated platform. It is not the case for the EQC though, with the electric platform that will also be of use in the future. Even though it is the first exhibit of the EQ family, the EQC makes use of the axles and body elements from the GLC. Meanwhile, the electric propulsion system has been developed from scratch.

The EQC is 10 cm longer than the GLC, but the wheelbase is identical. The interior dimensions almost perfectly correspondent. For example, at the rear, the kneeroom and legroom are absolutely identical. The real volume of the boot is of 450 liters. It is also identical in the two models, despite the presence, in the EQC, of the second electric motor mounted on the rear axle. With the axles from the GLC, the EQC provides the same high level of ride comfort. 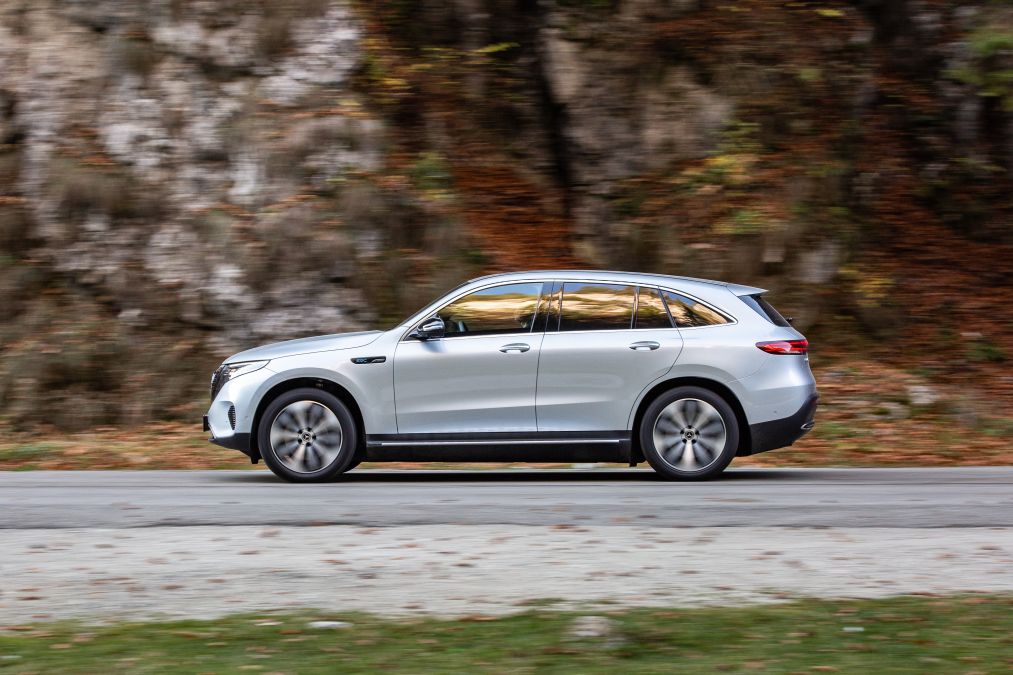 The passengers actually do not sense the imperfections of the road. That is because the suspension superbly filters any irregularities of the drive way. And the test route in the romanian mountains was torture for the suspensions. Additionally, the electric propulsion provides absolute silence when drivingey . That is thanks to the laminted double-glazed windows. They completely insulate the cab from the drive noises. The EQC runs extremely smoothly and quietly and, from this perspective, the electric EQC SUV is a genuine Mercedes-Benz.

Electric power on the Mercedes-Benz EQC

Due to the 80 kWh battery between the axles, the weight of the EQC is important, of 2.584 kg (2,495 kg officialy). That makes it 674 kg heavier than the GLC 220 d 4Matic. That is why on fast-driving bends, the high weight has an impact. When double-steer change, the great inertia cuts in. Comparatively with the GLC, there is no adaptive suspension, not even optional. The drivetrain with softer settings induces roll on fast bends, the lateral acceleration is not spectacular (0,89 g). When pushed to the limit, the ESP is quite intrusive and, as in any Mercedes-Benz (except for Mercedes-AMGs) it can never be completely disengaged.

On dry tarmac, the understeer is not that obvious. Tut, due to the great weight, the car tends to go outside the bend, though the mixed Pirelli Scorpion Verde tires maintain a good adherence. Also because of the weight, the agility upon bends is only average. The steering features a set up oriented more towards comfort than sharpness. 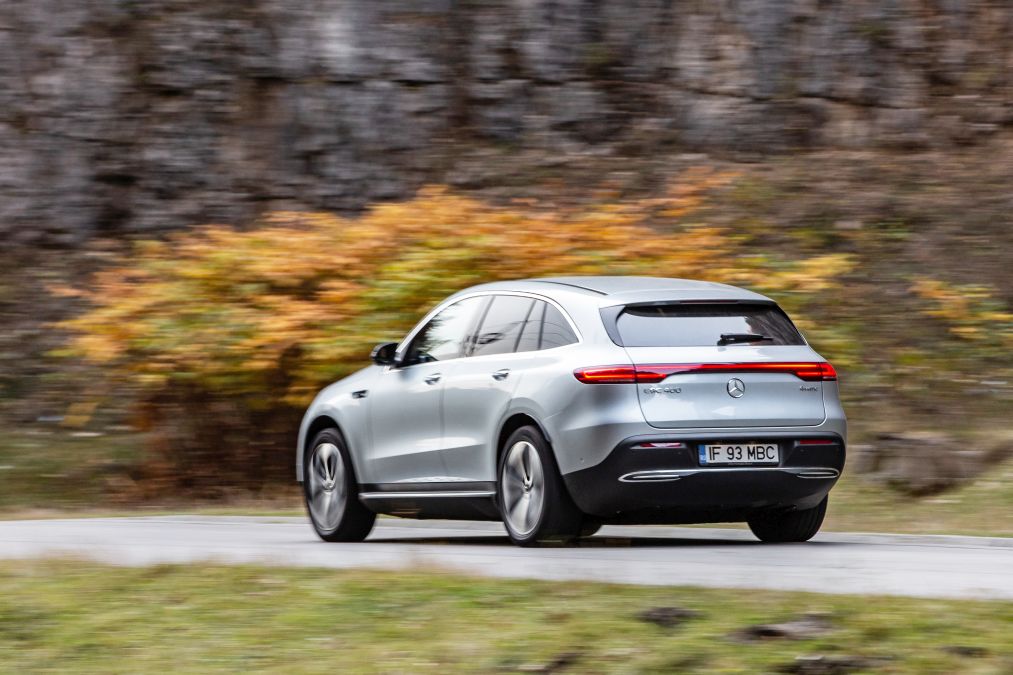 Instead, the two asynchronous electric motors with permanent magnets display a lot of vigour. Experts have designed the operation scheme with efficiency in mind. On low or medium loads, only the front motor operates, when more performance is necessary, the rear motor engages.

Instead, for the energy recovery, both motors operate as a generator upon breaking. Speaking of recovery, the paddles behind the steering wheel are not to be used for gear shifting. They are for raising or lowering the energy recovery level upon breaking, from D+ to D- -. Pulling the left paddle several times, the recovery level rises from D+ to D – -. In D –, the braking is quite vigorous and the driver can actually quit the brake pedal if he anticipates traffic a bit.

The electric motors provide a linear and fast acceleration, the run from a standstill to 100 km/h only taking 4.8 seconds. If the driver presses the throttle pedal swiftly, he will feel it unleash more violently than an AMG and the rear motor engagement cuts in, pushing the car as if out of a steam pressure catapult.  Undoubtedly, the longitudinal dynamics is exceptional, but for the energy preservation, Mercedes-Benz limited the top speed down to 180 km/h.

In electric models, luxury SUVs included, efficiency and range are still more important than anything else. Mercedes-Benz is quite good at this as well. The test combined consumption was 27.78 kWh/100 km, correspondent to a range of 335 km.

These are figures better than those of the rivals Jaguar I-Pace and Audi e-tron, assisted by the fact that the second electric motor is not permanently engaged. Audi  works also in normal conditions with only the rear engine and the front engine come into action only when more dynamic is needed.

And apart from its rivals, the Mercedes-Benz EQC also comes with specific drive modes. Therefore, besides the Eco mode, there is also a Maximum Range that optimizes range. The driver can set a speed limit and, when pressing the throttle pedal, when reaching the pre-set maximum speed, a pressure point on the run of the throttle, indicating to the driver that he should refrain from pressing. 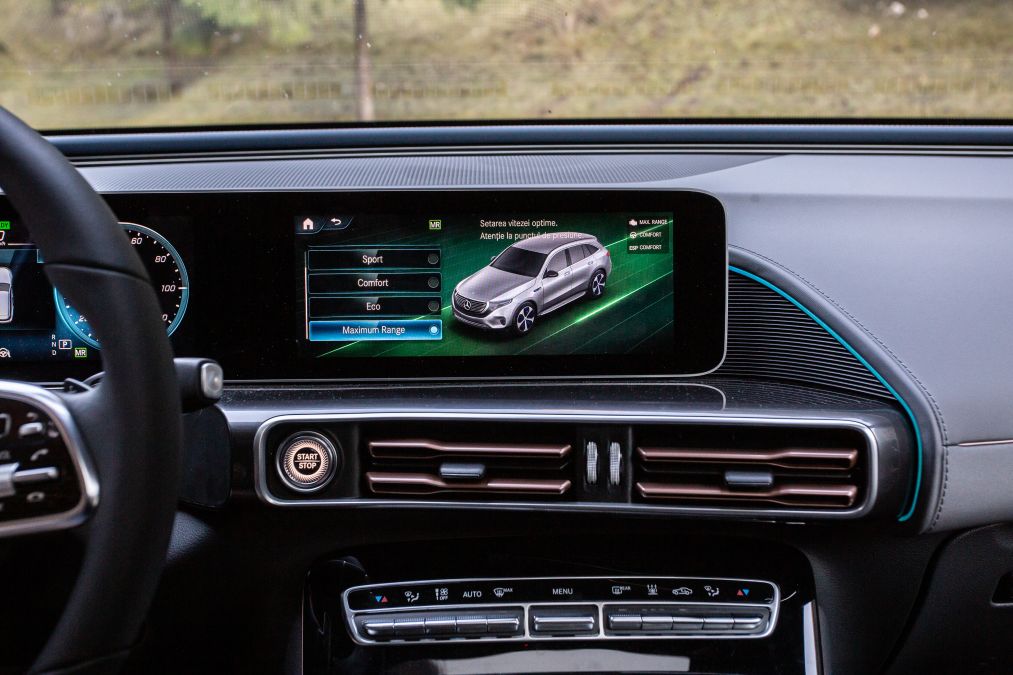 Furthermore, the EQC features an intelligent navigation system. It  allows you to set out a longer trip, considering the weather, uphills and downhills, as well as charging stations on the route. With the Mercedes Me Charge card or with the Mercedes me app, the driver has access to all of the 300,000 charging stations across Europe. In the end of the month, will receive a single invoice, regardless of who the operator of the station is.

The driver is also able to find out the address of a charging point and if it is vacant. It is quite practical, even if the location and the availability of the station can also be found out with the help of the globally available Plug-Share app. Last, but not least, the intelligent navigation making use of the radar-captured data, sends audio warnings to lift your foot from the throttle pedal when a downhill or when a roundabout is next.

The EQC recharges from 22 kW AC stations, but cannot receive more than 7.6 kWh, or from DC stations of up to 110 kW, case in which the battery charges from 10 to 80% in 40 minutes. The IONITY network with 150 kW stations are in full development around the Europe.

The best for last, range

I saved the best for last, range. On long-distance drives, along national roads, the EQC comes with a real range of 372 km, meaning that you can reach for example, from Los Angeles to Santa Monica and the way back. On highway, range drops down to 288 km if you drive by 130 km/h, but if you do 100-110 km/h, you get to drive more than 300 km.

In city drives, range reaches 354 km. It is a figure that allows you to recharge once in 10 days – two weeks if you only drive in the urban area. In such circumstances, range anxiety should not be a stressing factor when selecting an electric car. 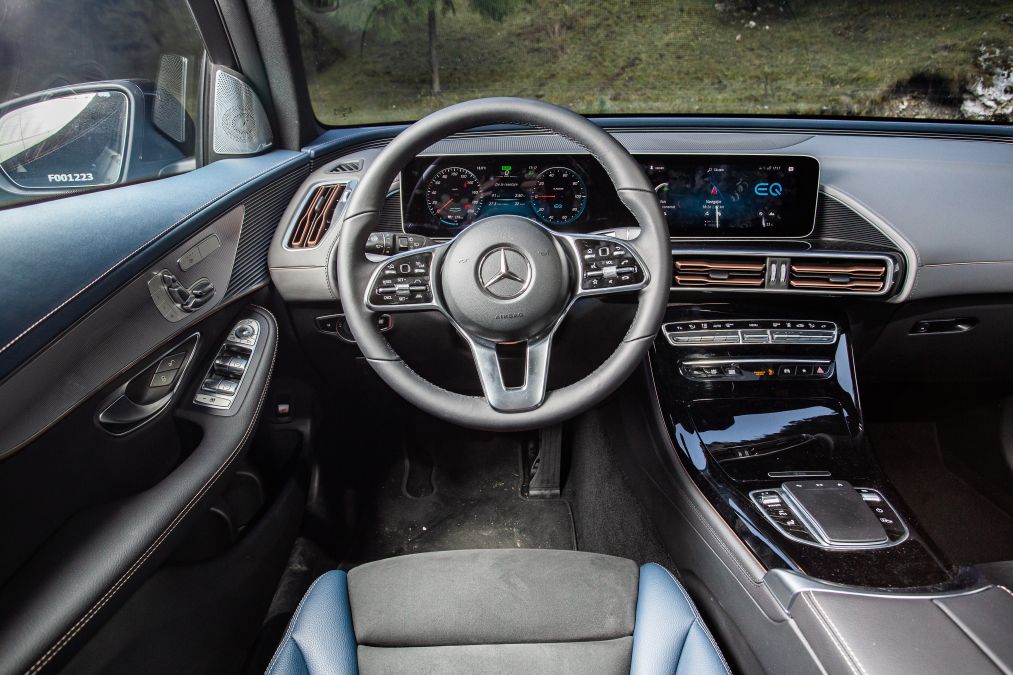 The interior of the EQC is a mix between the center console of the GLC facelift and the interconnected displays for the instrument panel and the infotainment system carried out from other Mercedes-Benz models (due to the dashboard architecture, the GLC facelift features no interconnected screens such as the GLE or the E-Class), standardly available with the MBUX system and the touchpad.

As in other Mercedes-Benz models, touchpad control is not the most practical of all. But the driver also benefits from the touchscreen, voice control or other two mini touchpads on the steering wheel. They are easily and intuitively to operate.

The model tested featured the exclusive Edition 1886 equipment line. It represents the year the first ever Mercedes-Benz came into the world, that was also the first automobile. The line adds extra 13,649 euros to the 71,281-euro price, VAT included.

For the money, you get superb 20-inch wheels with mixed tires, 235/50 R20 100W at the front and 255/45 R20 101 W at the rear. There is also the Burmester sound system. Also on the list, there are the Park assist with the 360-degree camera, the 2nd level of autonomous driving assistant package. The power memory front seats, an interior in Electric Art with grey leather on the dashboard and blue on the doors, with air vents in rose gold, a black backlit grille, high-tech silver paint and Artico leather/Dinamica microfiber upholstery with the 1886 logo on the seats backrests, also draw attention.

The EQC platform carries over the axles and body elements of the GLC. Tut engineers developed the propulsion system from scratch. For example, a steel tubes structure that features the same fastening points onto the body, like the one in diesel and gasoline models, holds the electric motor at the front. Therefore, it provides a perfect synergy with the GLC and the GLC Coupe. All models roll off the assembly line of the same plant in Bremen.

The two electric motors are asynchronous, with permanent magnets. Upon low and medium loads, only the front motor operates. When dynamic performance is required, the rear one cuts in. Upon deceleration, both motors operate as generators. The 80-kWh battery is produced by Deutsche Accumotive, a 100% Mercedes-Benz subsidiary, located in Kamenz, Saxony.

The lithium-ion battery found its place between the axles. It contains 384 cells (2 modules of 48 cells and 4 modules of 72 cells), with a 405V voltage and a nominal capacity of 230 Ah. The entire battery pack with the case included, weighs 652 kg. The climate system benefits from the presence of a heat pump.

Verdict| The first electric SUV from Mercedes-Benz is highly efficient. It has a real practical range of well over 300 km, with a maximum of 372 km on national roads. It also offers a high level of comfort, only normal for a true Mercedes-Benz.

The Mercedes-Benz EQC is quite fast. But, on the other hand, the agility is not its strong point because of heavy weight and a soft suspension. And charge at AC stations goes with low speed with only 7.6 kWh. The top of the range Edition 1886 package offer all you can dream.