In the hands of Ellen Lohr, the Mercedes-Benz 190 E 2.5 16V Evolution II made history. Ellen became the first female driver that ever won a DTM race, back in May 1992, in Hockenheim. Now it is a woman to put the classic car up against the brand-new Mercedes-Benz C 350 e, recently introduced in Geneva. Can a plug-in hybrid keep up with the Evolution II? Mercedes-Benz reporter Amanda Stretton is answering the question.

The Mercedes-Benz reporter Amanda Stretton has already put her hands on the newly presented Mercedes-Benz C 350 e, the plug-in hybrid sedan with impressive fuel consumption figures of only 2,1 l/100 km.

In order to decide if it’s good or bad – ‘cause there is no middle way between them – Miss Stretton chose a rough rival, that has nothing in common with the C 350 e: the Mercedes-Benz 190 E 2.5 16V Evolution, the DTM racing car built to last and to outlast. The car driven to victory by Ellen Lohr, first women to ever win such a race. 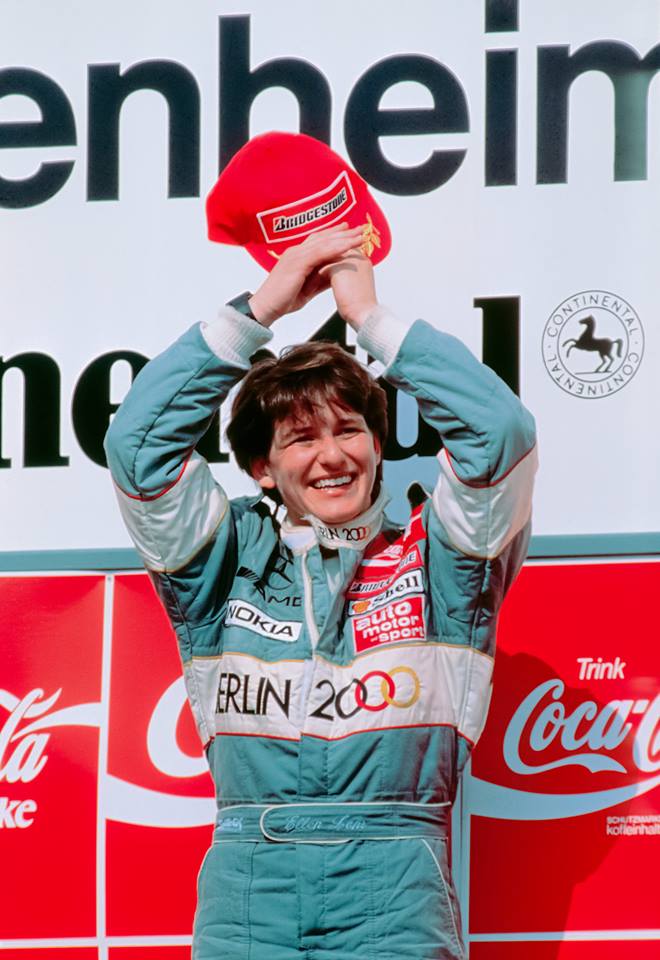 Ellen Lohr, first woman to ever win a DTM race

“I am a racing driver, so I am gonna start with this one”, she says pointing to the Evolution II.

And then Amanda rolls. And the car roars.

From behind the wheel that has been handled and taken to victory by Ellen Lohr more than two decades ago, she becomes even more enthusiastic.

“This car is really wonderful and it is so comfortable to drive”, Amanda says, also happy that she can manually adjust the pneumatic suspension even in a car that was built decades ago. 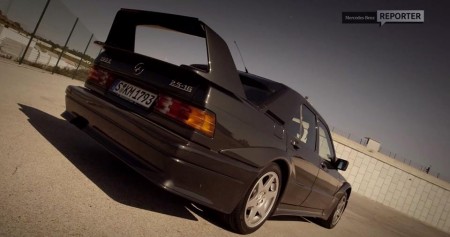 “Even though I am tearing along at over 100 km/h, you hardly feel a thing.”

“It is also a monster of a machine when it comes to acceleration. This is what a straight 4-cylinder 235 horsepower engine sounds like. And it also does 0 – 100 km/h in 7.1 seconds. See you later, boys!”

Seconds later, the video shows Amanda parking the Evolution II right next to the C 350 e and taking her second option, but also a top performer, for a ride, curious how the standard airmatic suspension works in it.

And off she goes.

“When you think about a hybrid, the first thing you think about is, of course, fuel efficiency and the C 350 e has got such designed figures, using 2,1 l/100 km of fuel. And when it’s in full electric mode, it can achieve 31 km in distance.”

“But it’s just a wolf in sheep clothing”, she warns. “When you adjust the settings from down here, you can feel some real acceleration. That’s awesome!” she exclaims giggling in surprise after pushing the pedal to the metal.” 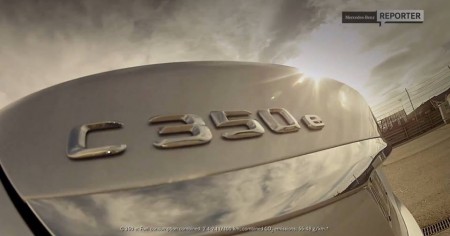 The 4-cylinder engine combined with the electric motor give the car a total power output of 270 horsepower. The C 350 e runs the 0 – 100 km/h in 5.9 seconds, over a second faster than the Evo II.

“If you want the driving dynamics of a sports car, the intelligent engine management system can give you all of that.”

With a quarter of a century between them, the “oldie, but goldie” and the newcomer show how far technology has come. And when it comes to choosing, she does not falter for a second!

“I know which one I would actually choose. In the C 350 e I can have lots more good and efficient fun. I just imagine what Ellen Lohr could have done with all of that!”

Watch the video and choose your own favorite!