The new BMW 7 Series has got one aim clear: giving better comfort features than its arch enemy, the Mercedes-Benz S-Class, while keeping the traditional sporty behavior, typical to the brand. Here is the first comparison test with the top of the range BMW 750 Li xDrive vs the long wheelbase Mercedes-Benz S 500 4Matic.

What is the definition of luxury? This complicated question has best been answered by Mercedes-Benz  through the S-Class. There is no other model in the luxury segment as successful as the S-Class, which is the only model in its segment to break 100,000 units sold in a single year.

The new-generation S-Class got the comfort standards so sky-high, while the rivals stayed far behind. The cruise comfort, the overall posh and plush and the amenities provided by the seats and by the low noise level are the main aces up the sleeve of the current S-Class.

But, in Munich, the Bavarian rivals from BMW shall by no means give in, as the all-new 7 Series comes with tech innovations that we were expecting to find in automobiles in years from now, but not just yet. Do they come up with effects able to match the high-end tech solutions?

In 2013, Mercedes-Benz redefined luxury for the rear passengers, introducing the Executive seats and the Chauffeur Package for the long wheelbase versions. Actually, the Executive seats allow the electrical adjustment of the backrest and the cushion up to a maximum 43.5 degree angle, which virtually converts them into a bed, especially because, from the base of the seat, a thigh rest is pulled out. Additionally, the “Chauffeur Package” allows the forward sliding of the front passenger seat by 90 mm, while, from under the cushion, a leg rest electrically pops out. The comfort amenities went on with the Warmth Comfort Package (630.70 euro), providing heating in the central and doors armrests. Naturally, the heated seats features (standard both at the front and at the rear), the ventilation and the massage ones (optional) are already integrated in the luxury arsenal of this segment. And the costly Exclusive Package (8,032.50 euro), with which our test car is also equipped, with Nappa Exclusive leather on the seats, in the upper part of the dashboard and the mid-area of the doors guarantee that warm sumptuous exquisite taste ambiance. 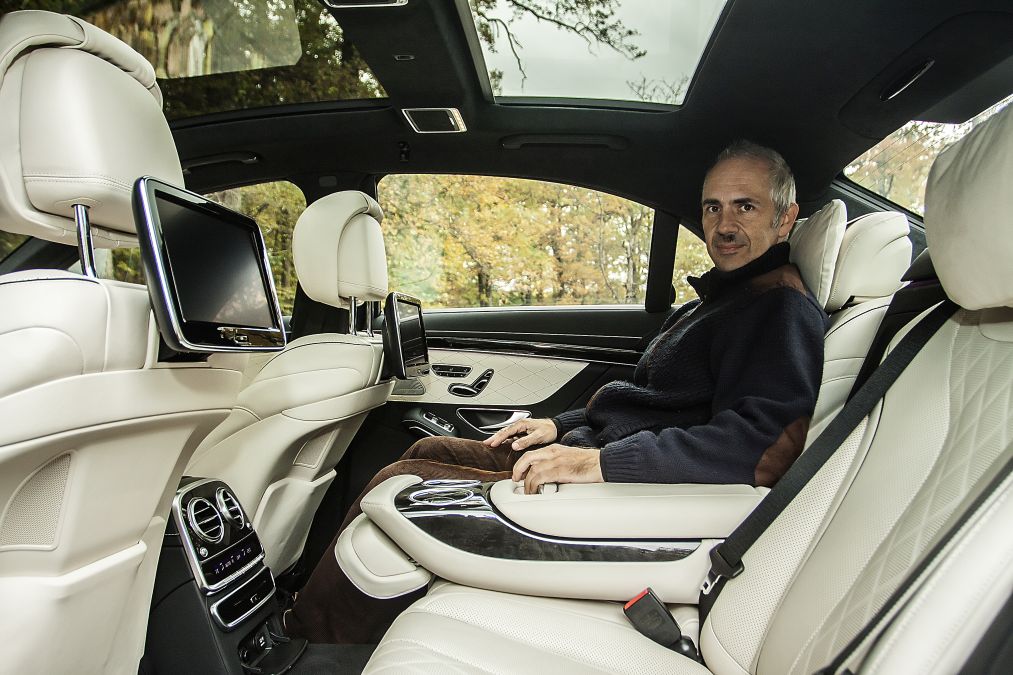 BMW absorbed all these comfort amenities into the new 7 Series. I said “absorbed” and not “copied”, because there are various dissimilarities, but the effect stays the same. The Executive Lounge Seats Package in the BMW come with a 42.5 degrees angle formed by the cushion and the backrest of the rear passenger seats and also a 90-milimeter sliding front passenger seat. BMW does not sport the thigh support in the rear seating area, but the leg rest is more practical, wider and seems more robust, coming out of the backrest. The massage, ventilation and heating functions are present, as well as the Heat Comfort Package, similar to that of the S-Class.

But the sitting position is better in the S-Class. The seats are slightly softer, the angle formed by the backrest and the cushion in the normal position is the optimal one, while the space offer is almost identical. Letting the figures speak, for a 45-millimeter longer wheelbase, the BMW has 10-millimeter more legroom in the rear (comfort distance – the distance between the backrests of the front seats and that of the rear seats is of 810 mm in the BMW, compared to the 800 mm of the Mercedes-Benz). 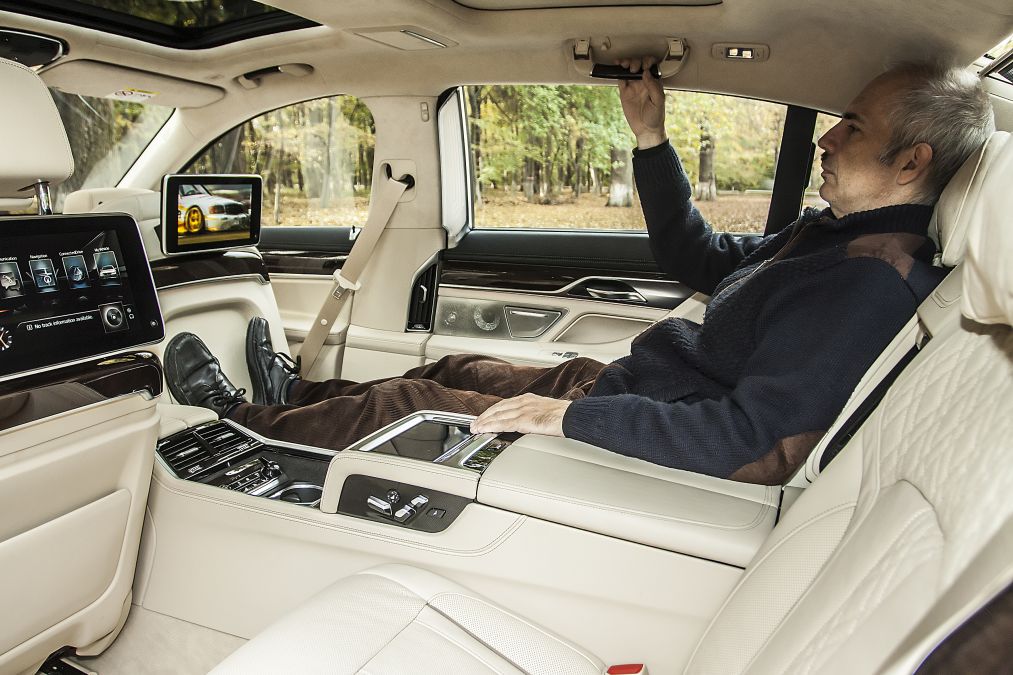 At the front, Mercedes-Benz is certifying its supremacy in terms of comfort, because not only the seats are more comfortable, but they also provide a better side support. With the active multicontour seats, Mercedes-Benz managed to blend all possible challenges. On the one hand, the seats are as massive as armchairs in a luxury lounge and on the other hand, the dynamic feature allows the outer extremities of the driver seat to tighten, but also the bolstering of the side surface the driver is leaning against during cornering. In spite of the variable cushion length, the seats in the BMW have a narrower and shorter cushion (54 cm with the extended cushion, compared to the 60 cm in the Mercedes-Benz) and do not sport the dynamic feature. BMW imitated Mercedes-Benz also when it came to the way of integrating the massage programs in the infotainment system. The Bavarian even came up with an innovation for the massage in the rear seating area. The Vitality Massage function brings active training programs and the instructions are displayed on the 10-inch screens of the Rear Seat Entertainment system. Pretty much an onboard Pilates practice.

If Mercedes-Benz is building the best seats, BMW made the most ergonomical, sophisticated and ultimate infotainment system. The new system is speed-of-light fast all due to a quad-core processor, the resolution is as good as that of a cutting-edge iPad and the navigation maps include the buildings of the metropolises in detailed level. More than that, apart from the all-classical controls – the typing of some destinations on the touchpad or the voice command – which is also available for the Mercedes-Benz, the BMW additionally offers the touch display and gesture control. A camera mounted right above the rear-view mirror detects your gestures, therefore, if you rotate your finger clockwise making a perfect circle, the volume of the audio system goes up and, if you rotate the finger into the opposite direction, it goes down. There are also various predefined hand motions.

I couldn’t say that the ergonomics of the Mercedes-Benz is obsolete, but the BMW simply comes up with more options that, few years ago, we would only see in motion pictures about extraterrestrial civilizations. All these gadgets can magnetize the young generation, especially because the BMW is full of those.

At the back, the BMW Touch Comand optional feature includes a 7-inch Samsung tablet that not only controls the iDrive system, but the seats adjustment as well. Apart from that, certain smartphone models can be recharged via wireless connection, if they are placed in a cradle in the armrest. And then, the head-up display system (standard for the BMW and an optional equipment for the Mercedes-Benz) has a 75% wider area in the BMW and an exceptional resolution.

All this being said, the critical question rises: has BMW built a more comfortable drive train than that of the Mercedes-Benz or not? Considering that the S 500 4Matic was shod with the standard 18-inch wheels, while the 750 Li xDrive was equipped with the 20-inch optional ones (1.368 euro), the answer is NO. 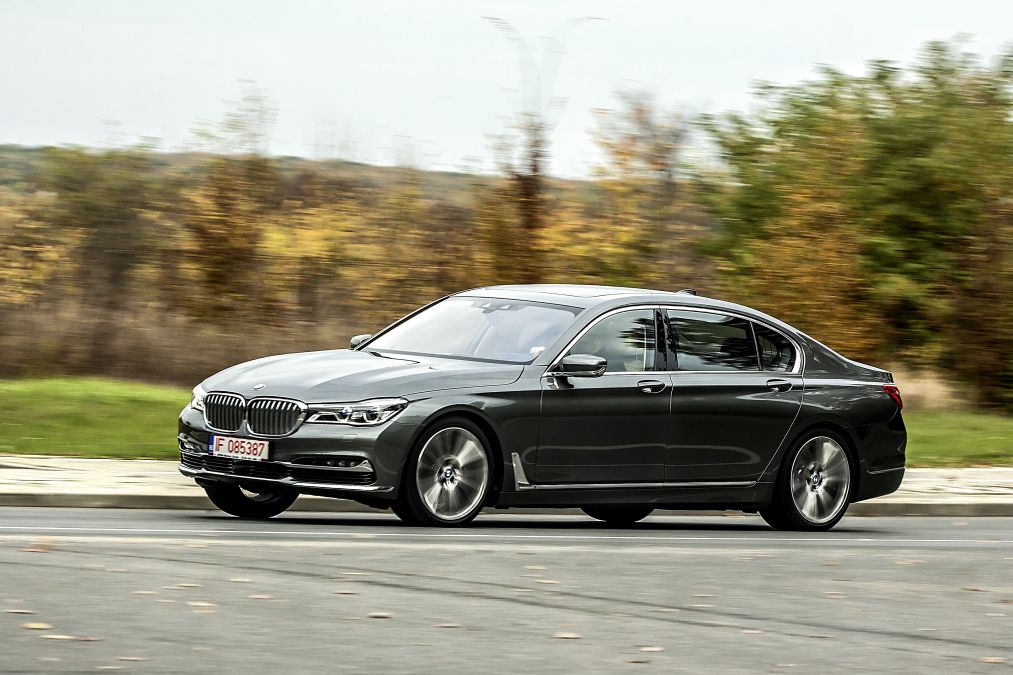 Apart from the former generation, which featured an airmatic suspension only for the rear axle, BMW is now offering adaptive airmatic suspension for all the wheels, with variable road clearance. In addition, together with the Eco, Comfort, Comfort Plus and Sport modes, the Adaptive mode made an entrance, as a mode that “learns” the driving style and adapts the rigidity of the damping, the response of the steering, the gearbox and the engine accordingly. And then, the Executive Drive Pro system present in the test car (2,950 euros) includes, besides the active stabilizer bars (now electromechanically operated and not mechanically controlled like in the past, known from the former Adaptive Drive Package), an intelligent suspension, that automatically adjusts itself according to the bumps that the front stereo camera detects. The camera features a system similar to Magic Body Control from Mercedes-Benz, which is much more expensive (5,057.50 euros) and not available though for the 4Matic versions. 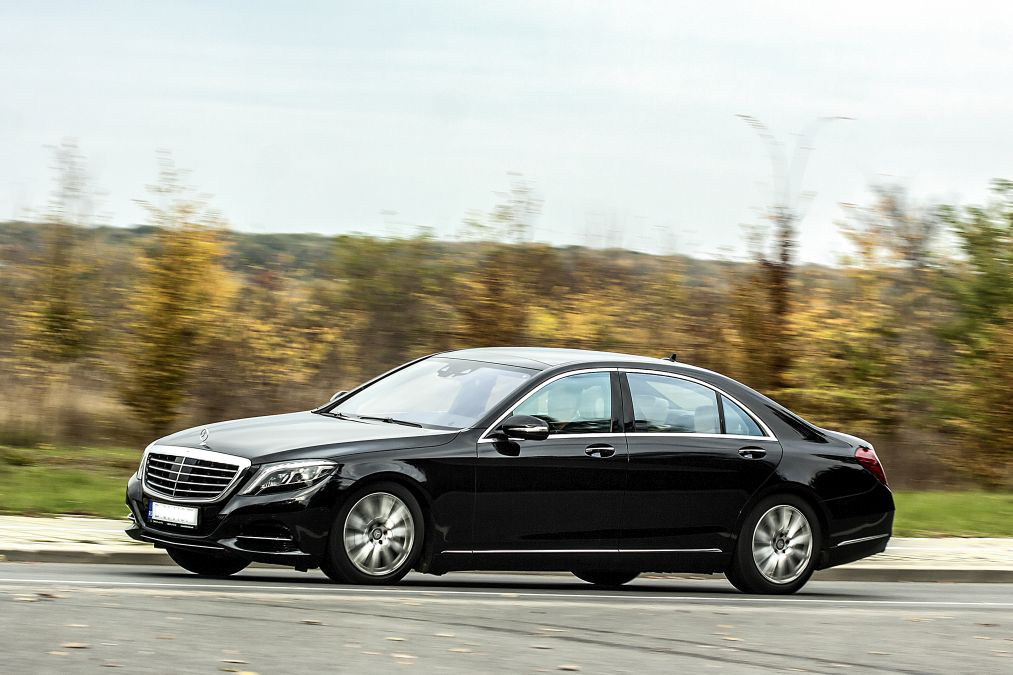 But with all these systems onboard, the 7 Series did not prove to be more comfortable than the S-Class for the first test. With the 7 Series in the Comfort Plus Mode and with the Executive Drive Pro onboard, passing over the tramrail by 50-60 km/h, the front suspension of the BMW is slightly unsettled, while the Mercedes-Benz elegantly muffles the small bumps in the Comfort mode. This still stands at higher speeds of 130-140 km/h along the highway, as the Mercedes-Benz cruises as if it was floating on an air cushion while passing over the bridge slots, while in the BMW, they are slightly sensed.

The dissimilarities with the competition are not sensed up to 150 km/h, but at speeds over 180 km/h, the S-Class is quieter, even though BMW has made outstanding steps forwards in terms of insulation and aerodynamics.

Dynamics-wise though, the BMW still stands as a benchmark, especially if the optional dynamic systems are ordered. The new integral active steering – integral traction combo, impossible to fit in the former generation, significantly improved the traction and the road-holding in rapid cornering. In speedy bends, at speeds over 60 km/h, the rear wheels turn by 3 degrees towards those at the front, which enhances the course precision and the dynamics in the rear axle. The BMW comes out of corners at higher speed and has better road-holding reserves than the Mercedes-Benz, whose tyres start squeaking, while the BMW does not give any hints on reaching its limit. The active stabilizer bars of the BMW are going a long way for this.

The BMW is a genuine driving machinery, while the Mercedes-Benz emphasizes the comfort. Probably, it is unlikely that many S-Class owners would ever press the Sport mode.

BMW comes with a slight superiority for the propulsion as well, all due more to the gearbox than to the engine. Supercharged with two turbochargers, the 4.4-liter V8 in the BMW and 4.7-liter V8 in the Mercedes-Benz bring similar performance. On paper, the Mercedes-Benz has a small 5 HP and 50 Nm lead, but this is not put into effect from two distinct reasons: the S 500 4Matic is by 80 kg heavier and the new 9-speed gearbox, available since this past summer for the S-Class, replacing the former 7-speed one, is not as intuitive and fast as the 8-speed gearbox in the BMW.

The BMW is 80 kg lighter, particularly thanks to its chassis mix structure which massively makes use of the carbon fiber reinforced plastic in the 13 important subsets as the B-pillar, the center tunnel, the A-pillar and the cross-bars on the rooftop. The weight advantage comes with an efficiency advantage, as the official figures show a 0.2 l/100 km lower fuel consumption for the BMW.

From the starting price, the 750 Li xDrive is by almost 1,000 euro less expensive than the long wheelbase S 500 4Matic. But the BMW brings a longer standard equipment list, which includes the Head-up display, 4-zone climate control and 19-inch wheels. If we should add all these as optional equipment in the Mercedes-Benz, the price of the S 500 4Matic goes up with around 4,000 euros. 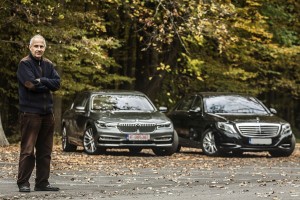 BMW stays a drivers car by excellence and, with its the optional dynamic systems, it sets new dynamics standards in the luxury segment. Even though the tech attack regarding the drive train is offensive, Mercedes-Benz stays the king of comfort in this class. Those taking a seat mostly in the rear will go for the Mercedes-Benz, but those who desire more driving pleasure, dynamics and love the modern gadgets, will certainly select the BMW.