Following the first contact with the new Mercedes A-Class range we have focused on the Mercedes A 180 d diesel variant, that is currently the only diesel-powered option in its class.

The former A-Class generation, built on the new MFA modular platform and the first to get a conventional body after the two generations that featured a sandwich body type, it went straight against the model of reference, VW Golf. But the poor visibility, the suspension much too rigid, the high noise level for the demands of a Mercedes and the improvable ergonomics were the most ardent slams against the A-Class that never managed to come any close to the sales figures of the VW Golf. 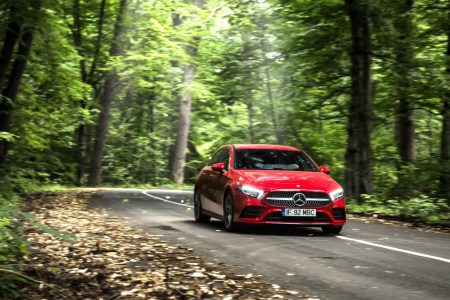 You may as well want to read this:

Mercedes learned from the inevitable mistakes of the thorough change of the A-Class and now comes with a modified MFA2 platform, that provides better body rigidity, an obviously better visibility, a lower general noise level (the articulation index that indicates the noise type and how well speech is audible onboard the car) that dropped by 12% and better aerodynamics.

For the test drive, we had the only diesel currently available, the A 180 d, with the 1.5-liter 116-horsepower engine, coupled to a 7-speed dual clutch automatic transmission. 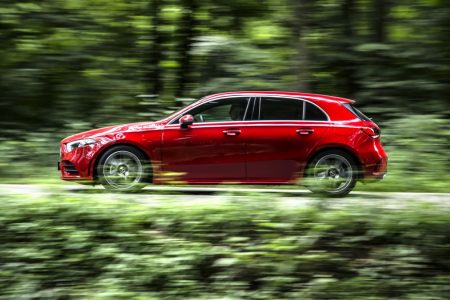 I have seen a lot of features, especially posted on the internet, that claimed that the A 180 d is powered by a Dacia Logan-sourced engine. The turbodiesel 2-valve engine from Renault was significantly modified by Mercedes. Not even the engine block is the same, because in the A-Class, it is lighter, but stiffer at the same time. The cylinder head is shorter and the suction pipe has been built in the cylinder head lid. The intercooler is water-cooled and the injection pressure raised from 1,600 to 2,000 bar. Similar to the previous generation of this engine, but different from Renault, are the pistons that are still made of steel. The turbo with variable geometry was also modified and integrated in the exhaust pipe. 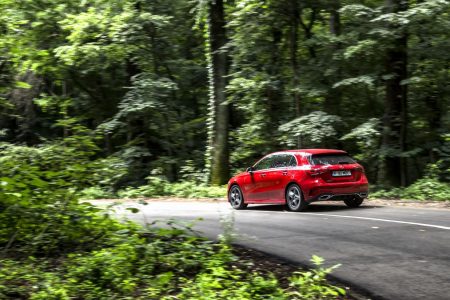 The new engine develops 6 horsepower more than in the Renault, while the peak torque is the same at 260 Newton meters, achieved at 1,750 rpm. How does it drive? Compared to the former engine, it has more vigor in the low rev range, so that the rallies are slightly zippier and it revs up easier, providing a good performance for this displacement in the upper rev range. At accelerating though, it is relatively noisy from outside, but inside, the better sound insulation filters more of the engine sound.

The 7-speed dual clutch gear box is supplied by Getrag, but is by no means up to the Mercedes demands. I have criticized it in the gasoline-powered A 200, because it is undetermined in downshifting and skids in hefty accelerations, as the engine revs up more than necessary, thus losing part of the power transmitted to the wheels. In the case of the diesel, this phenomenon is a bit blurred, since the diesel engine features a higher torque at lower revs and the gearbox is not that undetermined in downshifting. But the skid is still there in the diesel as well with the related loss of power sent to the wheel. 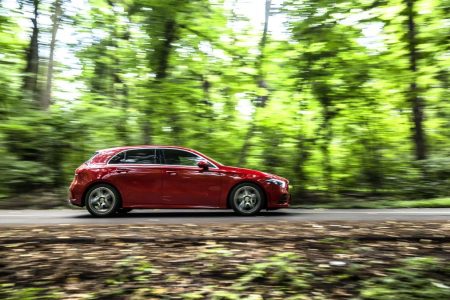 Check out the prices of the new Mercedes-Benz A-Class

But, due to the more potent engine, the A 180 d runs 0.1 seconds faster than the former 110-horsepower engine and the top speed of 202 km/h is 12 km/h higher, as the fuel consumption stays very low, at 4.1 l/100 km. throughout the test drive, we reached, in real driving conditions, urban and national road, at 4.7 l/100 km, which is an outstanding figure.

The critics against the gear box cannot blur the exceptional impression on the new A-Class. The car feels more composed and smoother than the one preceding it, the improvement of the body rigidity is obvious and the interior quality overtops everything in the compact class. The trim is flawless and, if you select the AMG package, as it was the case for us, you get an extremely elegant interior, nut just well made, with quality materials. The new A-Class is a genuine Mercedes from all perspectives. 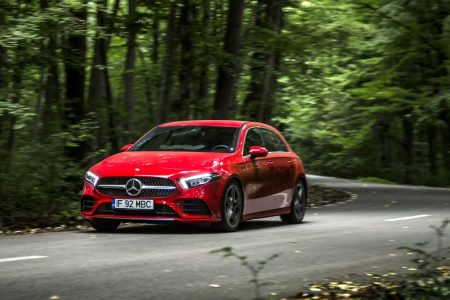 The spontaneous steering has a very pleasant feedback, the three-quarter rear visibility is way better, the seats of the AMG package are superbly set up and the drivetrain provides an assurance worthy of the upper classes. Behind the steering wheel of the new A-Class, you feel like in a bigger-sized sedan. But the AMG package combo that automatically brings 18-inch alloy wheels and a lowered comfort suspension with a semi-rigid rear axle with no adapting features is not ideal in terms of comfort when passing over short road bumps. That is why, if you tick the AMG package box, it’s only right that you also tick the adaptive suspension (€833), that comes with the rear multilink suspension. With the output of 116 horsepower, it is not necessarily to get the dynamics of a rear multilink axle, but, together with the adaptive feature, it provides much more comfort.

Instead, the firm suspension and the spontaneous steering provides the A 180 d with a remarkable agility that, until recently, was more familiar to BMW and that, at least in the 116d opponent with a 3-cylinder engine, does not feature the sharpness of the new A 180 d. 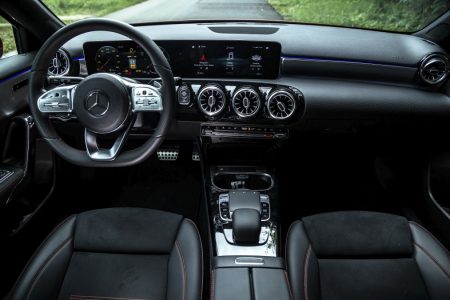 The A-Class comes with a new operating concept, the MBUX, but the exquisite 10.25-inch displays are optional. Two 7-inch displays are standardaly available and the good thing is hat you can choose the hard disc navigation (€654,50) together with these displays. The test car was equipped with the top-of-the-range variant of the infotainment system, involving a 10.25-inch touch screen (€773,50), virtual instrument cluster (€535,50) and hard disc navigation (€654,50) that come together with the touchpad and the voice control from the button on the steering wheel or if you speak out “Hey Mercedes”! the virtual screen of the instrument cluster can be configured in three different modes – Progressive, Sport and Understated and each of the modes features 5 display themes. The two screens feature an exceptional resolution, the menus of the infotainment system are well organized, but dropping the controller was not the ideal solution. Instead, it can now be operated the easiest via the touchscreen, because the touchpad is not quite precise. 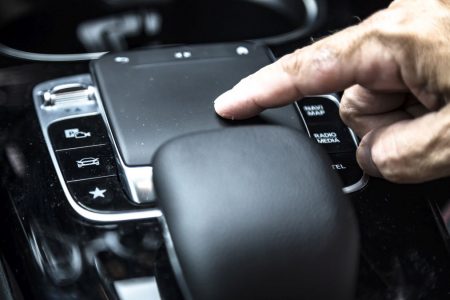 It is better in terms of precision than in the Lexus, for example, but the move via the controller is more exact. Regarding the voice control, it perfectly works for the names in the phone book. The system instantly recognizes and understands all names in the phone book if they are transferred via Bluetooth. But the street destinations in countries from Eastern Europe are totally unknown to the voice control. On the other hand, the navigation is extremely quick and you can rapidly find an address because it is enough to insert only the name of the street and you get an alternative route. Unfortunately, sun reflections show in the glossy displays, but the great contrast allows optimum visualization.

The new A-Class grew 12 cm in length, but the wheelbase only raised by 3 cm. There is not more space at the rear than inside a Golf, but two passengers can very well sit on the excellently profiled rear seats. The bench can be split in 40/20/40%, with the central sector playing the part of an armrest. The boot is easier to access due to the 20-cm larger opening and its volume of 370 liters is now comparable to that of a Golf. In the end, the price worthy of a Mercedes for the A 180 d diesel variant starts at €31.178. With the AMG package and with the top-of-the-range infotainment system, we’re heading straight to €40,000. It is though, a diesel of only 116 horsepower, but it is a Mercedes. And at least the interior and the driving qualities are worthy of a Mercedes. 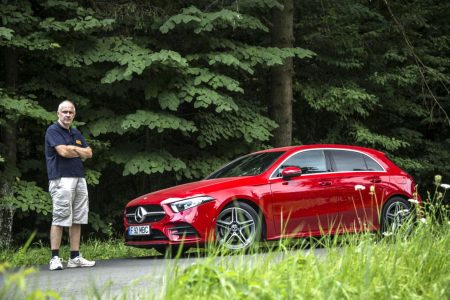 The A-Class is the most elegant, luxurious and well-made car in the compact class. Mercedes puts forward in the A-Class as well, the ambience of the S-Class, a hint that there is no difference between the compact and the luxury class. But the asking price flushes with Mercedes. The entry-level diesel is a just and extremely economical engine, but the Getrag gear box is far from being the ideal solution.