These two cars are a weird mix: compact dimensions, plenty of space and practicality and the power of a true sports car. No wonder you can’t find anything quite like them in the whole industry. But which of them is the better one?

Tough question to ask, so it’s time to leave it to those who know the two brands the best to find an answer: the German automotive journalists and this time it’s the guys at Auto motor und sport again.

Before its imminent launch, a lot of people thought the new Audi RS3 would lose its legendary five-cylinder turbo engine in favor of a more eco-friendly (and also tax-friendly) four-pot, but we all know now that was just the usual lore surrounding the development of a highly anticipated model. So the new Audi RS3 has the same 2,480 cc five-cylinder engine, only now it develops 367 hp and  465 Nm, making it stronger than ever.

The interior, however, is more underwhelming. For the unaware eye, you could think you’re inside of a specially trimmed TDI version, with just the Alcantara on the wheel and the seat embroidery giving away the fact this is a special Audi. And you should also say goodbye to the manual transmission which was dropped due to customer preferences. 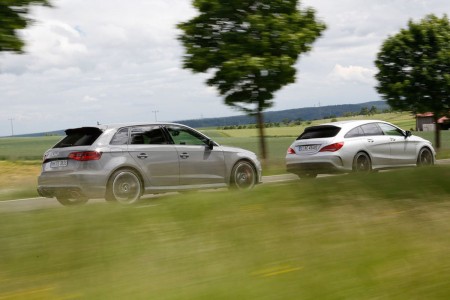 The classic sound of the five cylinder engine can only really be heard during regular driving, when the exhaust system is kept silent. When pushed, the extra 15 Nm are hard to tell, while the 27 hp boost makes itself felt only when the needle reaches the red line – a point where the RS3 literally catches fire, spurting flames out of the exhaust pipes on upshifts. Drama in its purest form.

Audi RS3 Sportback comes with a series of changes over its predecessor, all meant to reduce understeer – the front and rear tires are now the same width, the track has increased, the Pirelli tires themselves have a more adhesive compound, it’s got progressive steering with RS characteristics and, most importantly perhaps, wheel selective torque distribution – the name really says it all.

But enough with the Audi, what about the CLA 45 AMG Shooting Brake? Well, for starters, it is considerably heavier than the RS3, with a 60 kilos extra for the Mercedes-Benz. But that is not necessarily bad news – since the added weight is concentrated at the back of the car, this actually gives the CLA 45 AMG Shooting Brake a better weight distribution making it the most agile of the whole Mercedes-Benz compact class. This may sound bizarre, but you can’t argue with physics.

Apart from that, the Shooting Brake outfit doesn’t change the raucous nature of the CLA 45 AMG, with its high revving engine and loud exhaust that detonate on almost every upshift. 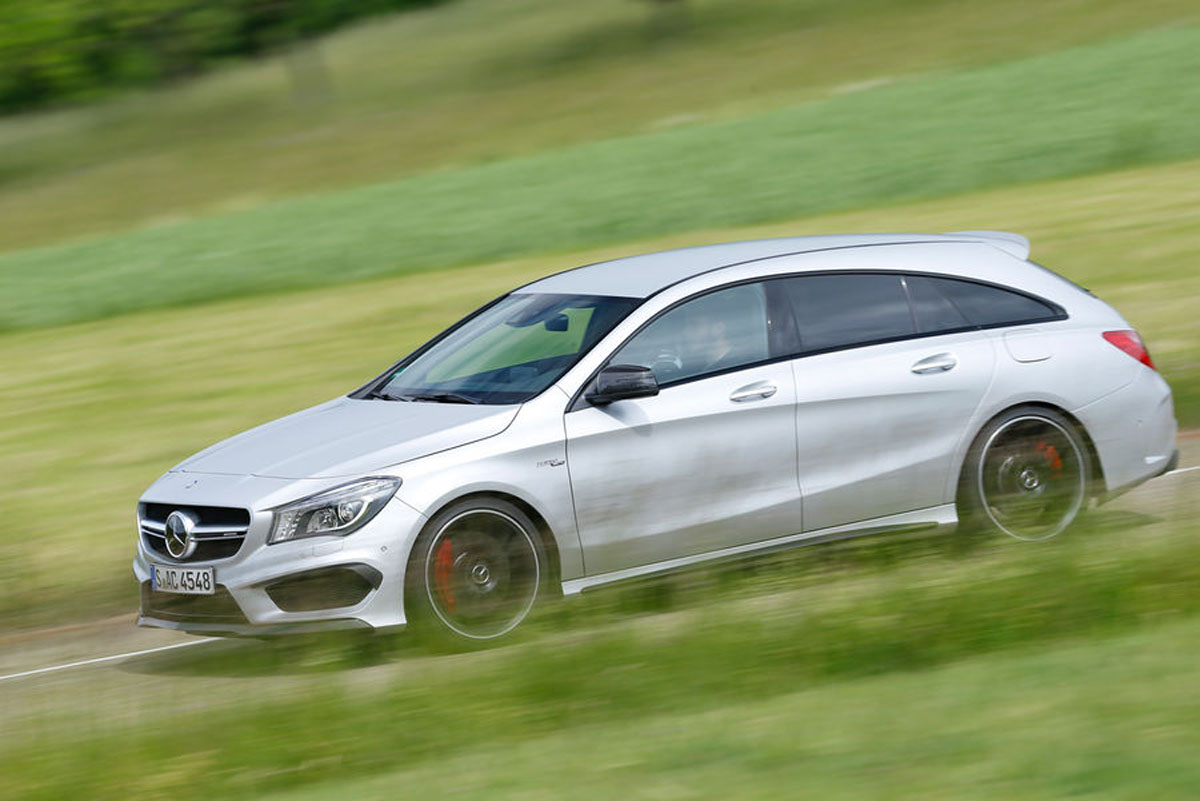 The Mercedes-Benz  suffers a bit from turbo-lag, hampering the CLA 45 AMG Shooting Brake’s 0-100 km/h times in the test which was carried out. On the other hand, the Audi RS3 Sportback was facing different problems, having to cope with serious wheelspin despite its quattro all-wheel drive system.

Out on the road, there’s no real difference in terms of performance between the two, with plenty of grip, steering feel and maturity in the way the two cars handle. On the track, the Audi RS3 is one second faster, and the German journalists have found two culprits for that: first is the more hesitant steering response, just the fraction of a second delay between the steering input and the actual reaction of the wheels; second, they point the finger at the less robust front axle.

So this should be an easy win for the Audi, right? I mean, it’s faster off the mark, it’s faster around the circuit and it’s got a better power-to-weight ratio. And yet… 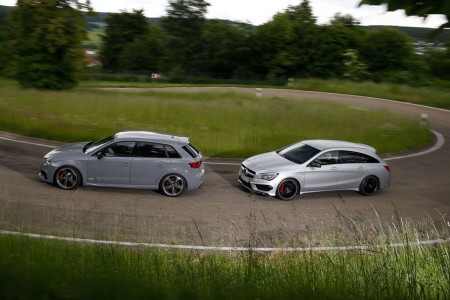 It’s the brakes that kill the car. Even though they don’t affect stability like they did on the previous model, it’s the ABS that jumps into action way too often and affects braking distances. The Audi RS3 Sportback is car capable of hitting 100 km/h from a standstill in 4.2 seconds, so it should be able to stop similarly fast, otherwise is simply becomes an uncontrolled torpedo. Its braking distance is greater than that of the previous generation and that’s pretty unacceptable.

One way around this problem would be the option ceramic brakes, but the test car didn’t have them. They’re expensive, but they might one day make the difference between life and death. Or, at the very least, between a one piece Audi RS3 Sportback and an Audi RS3 Sportback in pieces.