The future Mercedes-Benz E-Class station wagon is out testing

The future Mercedes-Benz E-Class station wagon has been caught testing ahead of its launch scheduled for 2019. The spy shots confirm that we are dealing with a car that follows the lines of the sedan, but things change in the rear.

What is set to be the more spacious variant has been photographed again shortly after some of the first spy photos of the car surfaced, approximately three weeks ago.

The E-Class wagon is also getting a slightly different front fascia, as the model aligns to its siblings form other classes. The makeover focuses on the headlights, the radiator grille and the bumper. The air intakes might also be repositioned and redesigned. The new design will make it look more aggressive, in the style of the compact class recently revised, but will also bring it one step closer to the E-Class All-Terrain variant, that we tested last year. The makeover also targets the interior, as the E-Class Station Wagon is set to get the new MBUX infotainment system based on artificial intelligence.

The engine range will not differ much from the current one and will surely include the recently added hybrid variants, the E 300 e and the E 300 de, introduced by Mercedes-Benz last October. 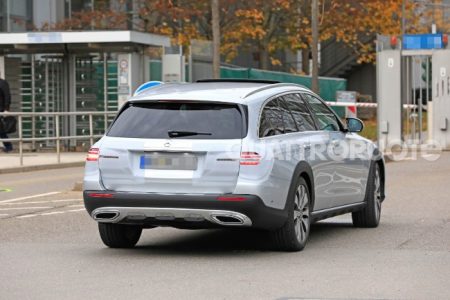