Mercedes-Benz E 250 CDI Cabriolet proves an inconceivable calm and runs for a top position in the ranking of the most successful cars designed for summer adventures.

For many of us, a cabriolet means petrol engine, exhaust noise, sports suspension and outdoor drifts. A long-drive cabriolet este far from that concept. I found this out right behind the wheel of the new Mercedes-Benz E-Class Cabriolet. The car managed to dazzle even though there is a 2,2 liter bi-turbo „budget diesel” with 204 HP, under the bonnet. We are dealing with a facelift. But the changes are so many that it would not be wrong to consider it a new model. Regarding the body shell, the touch of refinement is provided by the new light units that are built in the two LED wands, emblematizing the new brand identity.

Maybe the color is not the best choice for the photo shooting. But I can guarantee that it will not go unnoticed in the street. Yet the tone is just perfect for a retractable-roofed car, spending the most of its life under the sunlight.

The outside dimensions make me think of a generous inside space for two people and eligible for four. But the practical test shows that the two rear seats are surprisingly comfortable even for adults. The E-Class Cabriolet provides a more comfortable rear bench-type seats up against the 6 Series Cabriolet, for example. That is despite the fact that the latter is built up on the platform of the superior class – 5 Series/7 Series. 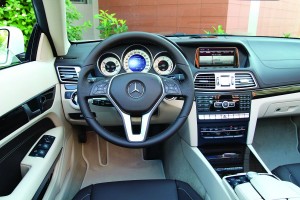 The two color trimmed interior bemuses by taste, by the detail orientation and by the typically Mercedes-Benz sobriety. All the materials I come across are hand-picked. The leather upholstery extended up to the dashboard, accomplishing the luxury under the cloth roof. Speaking of which, more and more rarely seen among the up-to-date cabriolets, the quality of the manufacturing and the care show us that a quality „fabric” can be at least as good as a metal roof. Well, even when we rolled with the roof up along the cobbled streets, the parasite noise refused to break through. And, most importantly, to get inside the binnacle.

I must admit that firstly reading the 250 CDI code marked out the boot, I shivered. The engine seems very familiar, as I myself have bet on it many times. But, under the bonnet of a cabrio, it seemed a little strained. That was until I revived it and the typical noise of a diesel turned long in coming. I rarely encountered such a good sound-proof in a body shell. From behind the wheel, it is a genuine Mercedes-Benz and that’s just right. Comfortable, refined, with an enhanced steering, the E-Class Cabriolet is the car I would dare to tour Europe by. With the rooftop down.

The Mercedes-Benz E 250 CDI Cabriolet in the “naked” mode

During the „naked” mode, you can chat to the right passenger even at speeds exceeding 100 km/h. That rarely happens among the cabriolets. During the 800 km that I covered, the E-Cabriolet impressed me by the long drive balance, for which the 7-speed automatic transmission and also the new upgraded safety facilities go a long way. Only good things to say about the settings of the suspension. It is comfortable, expansive and very careful not to inform those aboard about the meaning of the „Road Up” traffic sign. On bends, the reeling and the pitching motions are inside the standard limits, but, when you see „Hairpin Bend” sign from inside an E-Class Cabriolet, you’d better put the roof down instead of disconnecting the electronic safety systems.

The great number of electronic systems aboard do not deprive you of the delight of driving, but enhance the safety feeling. The brake foot lever promptly responds, even though the first part of the travel is foolproof. During this drive test, I coud see the new Pre-Safe Brake at work. It automatically braked when the one in front of me suddenly stopped for no reason and with no light warning.

The new E-Class Cabriolet helps you reveal the emotional side of a car designed for holiday and, together with a 250 CDI engine, an enviable range (we travelled more than 800 km with one full tank without focusing on the ECO mode). And the range could be even longer with the new 9G-Tronic gearbox. The car we drove had a 7G-Tronic gearbox but now this engine could be ordered with new gearbox 9G-Tronic which has a large ratio between first and 9th gear of 9.15 allowing driving at highway speeds at lower revs with direct benefit for fuel consumption.

The E250 CDI Cabrio is a long drive cabriolet aboard which you forget about the „black pump”when speaking of range, but you remember it at high freeway speed or during stages from 80 to 120 km/h.