Sport Auto magazine, which constantly makes fast laps at the Nurburgring with new sports cars launched, has set a new record. The Mercedes-AMG GT Black Series covered a circuit lap in 6:52.54 minutes, with journalist Christian Gebhardt behind the wheel.

The sports car magazine Sport Auto, belonging to the Motor Presse Stuttgart group, which also owns motor motor und sport magazine, constantly performs tests with the fastest lap on the circuit with supersport cars. There is even a ranking of the fastest cars on the Nurburgring made by Sport Auto magazine. The times obtained by sport auto magazine can be compared because they were obtained with the same driver. 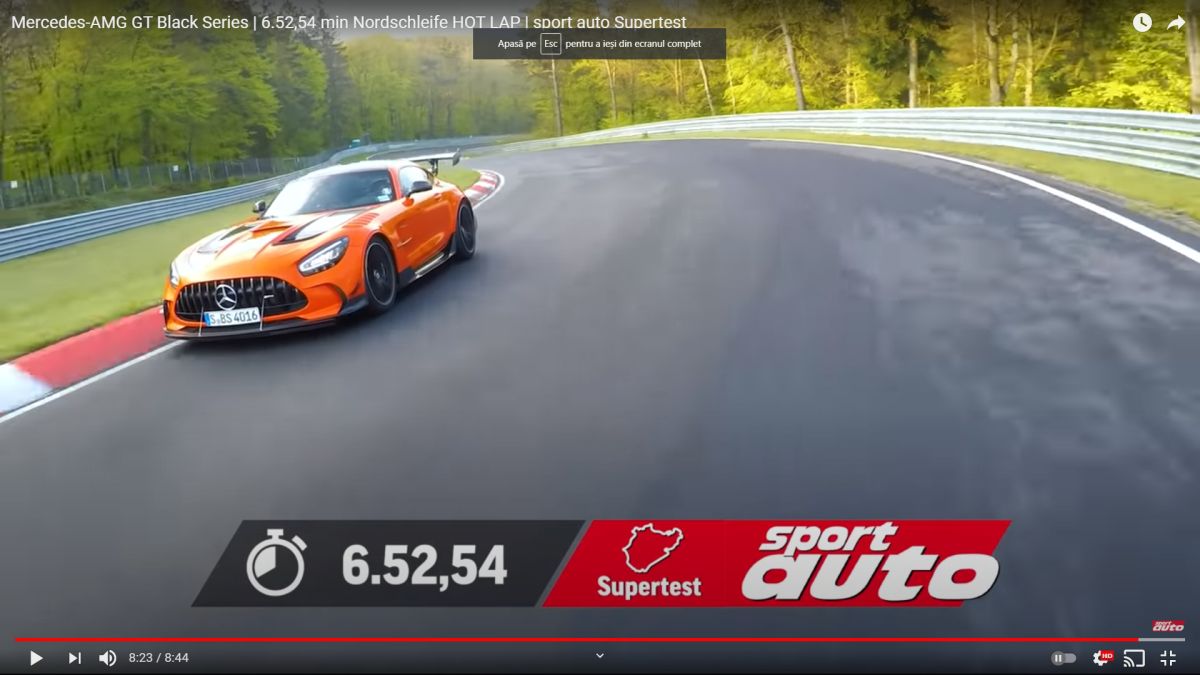 For several years, from the early 2000s until 2014, the quick laps were made by Horst von Saurma, the former editor-in-chief of Sport Auto.
Horst von Saurma managed, among other things, to complete a circuit lap in 7: 32.40 min with the Porsche Carrera GT in 2004 and in 7:28 min with the McLaren MP4-12C.

After 2015, the sport auto tests are performed by Christian Gebhardt, who was the first journalist to go down in less than 7 minutes on Nurburgring. On April 17, 2018 Christian Gebhardt managed to complete one lap in 6: 58.28 min with a Porsche 911 GT2 RS (991.2). Now Christian Gebhardt has improved his best time by almost 6 seconds behind the wheel of a Mercedes-AMG GT Black Series.
Gebhardt stopped the clock at 6: 52.54 min, an exceptional result considering that the AMG GT is a front engine car.

The top speed obtained was 311 km/h at the end of the straight line near the end of the circuit lap.
Could Christian drive even faster? He drove almost perfectly. Only at minute 4:56 it is noticed that it went quite far beyond the vibrators and probably lost between 0.5 and 1 second there.
But the result of 6: 52.54 min is sensational even for a racing driver. Congratulations, Christian!

It is clear that there is a good chance that this record will be broken by Christian in the fall with the new Mercedes-AMG One supercar that incorporates F1 technology.

Gebhardt’s result is the seventh best time in history. The record is held by the Porsche factory driver Lars Kern who obtained 6: 38,835 min with a Porsche 911 GT2 RS (991.2) equipped with Michelin Pilot Sport Cup 2 R tires and Manthey Performance kit on June 14, 2021.

You can see here the quick lap with the Mercedes-AMG GT Black Series.