A LEGO 1969 Mercedes-Benz 280 SL looks like it is ready for a coast ride. LEGO enthusiasts rejoice. How was it actually built?

There are 1,377 LEGO pieces making up this 1969 Mercedes-Benz 280 SL automobile. It is the representation of patience and passion, all wrapped up in a bright shade of blue.

Considering that LEGO rewards the best projects by turning them into commercially available products, many enthusiasts are chasing the spotlight. One of them is Hasan Kabalak, who seems to be a talented LEGO models designer. And cars are on his menu. His 1969 “Pagoda” is a 13.6 x 9.2 x 4.2 inches model. That would translate into centimeters as 34.6 x 23.5 x 10.9. These are the somewhat accurate figures provided by the owner/creator.

The LEGO Mercedes-Benz 280 SL, with an original approach

The front doors open, the hood and trunk lid pop up, providing the car with a high sense of reality. When the hood goes up, a 6-cylinder power plant shows up. That is quite an original take. So do the oil tank and the battery. There is also a spare wheel, just in case. There is an elegantly shaped steering wheel, there are pedals, an air conditioning system and a radio. Meanwhile, the model also features a rearview mirror and wipers. 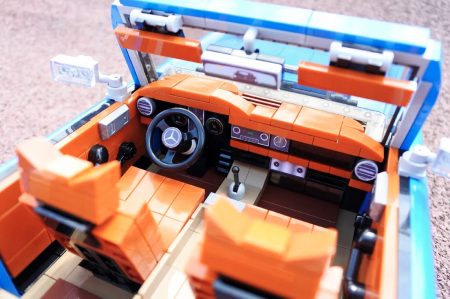 The real Mercedes-Benz 280 SL rolled off the assembly line between 1967 and 1972. It came into the world as a natural sports car. But soon underwent several makeovers, becoming a genuine grand tourer. Of the 23,885 280 SLs produced, more than half were sold in the US.