SL: the comeback to the meaning of the SL Letters

The sixth generation of SL comes back to the essence of the original: more light, more dynamics, more pleasure to drive. Here are the technical highlights of the new SL, code name R 231.

Too heavy, not too sporty – these are the critics to the modern generations of SL. But Mercedes remembered what the SL letters mean: sport and leicht (light in English) and made big changes to the sixth generation of SL, which still keeps the characteristics of a luxury roadster.

As a premiere for a modern Mercedes, the bodyshell is made almost entirely of different types of aluminium, which is used in a proportion of 89%, meanwhile 8% percent is high strength steel for the A-pillar and 3% made of other materials. The new bodyshell is more rigid than the former one, with a torsional strength of 19,400 Nm/degree, 20% extra comparing to the R 230 (code name of 2001-2011 generation) and with only 254 kg, it is by 110 kg lighter than the former generation. To make it clear, even the dimensions extend in all directions (length grows by 50 mm at 4,612 mm, width is increased by 57 mm at 1,877 mm), the weight of the basic SL 350 version is only 1,685 kg (by 140 kg less) and SL 500 is also by 125 kg lighter at 1,785 kg. Consistent weight reductions were also obtained all over the car:

–      The front part of the roof and C-pillar made from magnesium/plastic save 15 kg.

–      The new seat structure with new adjustment mechanism save another 11 kg.

–      The aluminium support frame for the front axle and engine saves extra 11 kg.

–      New standard lightweight wheels are 15% lighter and save another 4 kg.

Mercedes pledges not only a weight loss, but also other advantages:

–      The quietest vehicle in its class with the roof up, comparable with a luxury saloon 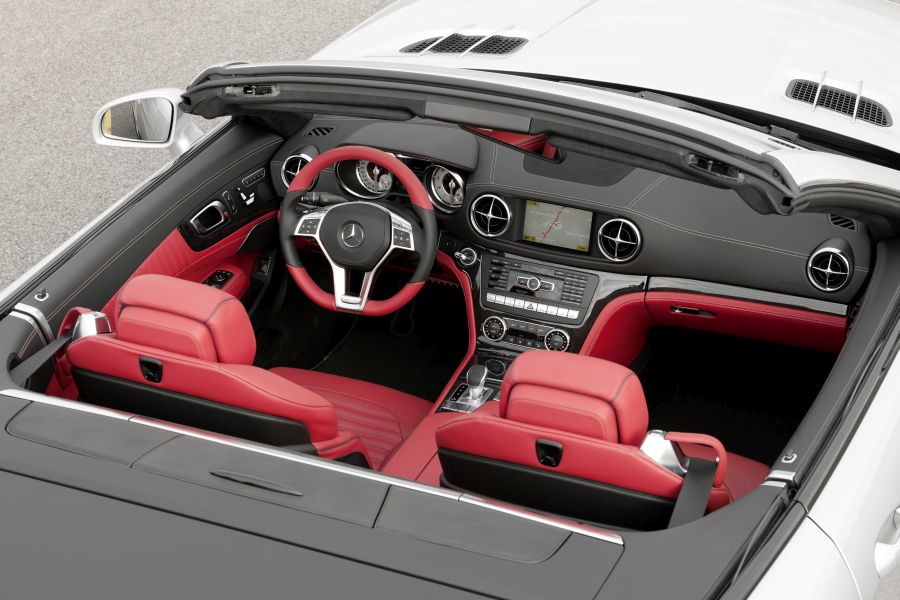 Like the SLK, three versions of rooftops are available: a classic one having the color of the body, a glass top or the panoramic vario-roof with Magic Sky Control. By the push of a button, the transparent roof switches from light to dark. Meanwhile, the engineers refined the operating mechanism of the roof, which now only takes less than 20 seconds to open or close.

Magic Sky Control system is more fascinating in a roadster

The boot offers a volume between 364 litres, with the roof stowed, and 504 litres. By the push of a button, the roof elements stowed in the boot can be tilted upwards by 25 degrees to make loading and unloading easier (Easy Pack system). 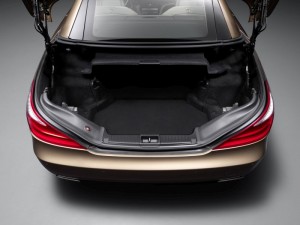 The new SL comes with two other innovations, which could be seen in the top of the range S-Class saloon or Coupe and are offered as standard equipment: the new intelligent wash system of the windscreen which affixes the washer fluid just in front of the wiper blade lip via the channels integrated into the blade and Frontbass system, which uses the free space in the aluminium structure in front of footwell as the resonance chamber for the bass loudspeakers. With bass loudspeakers incorporated in the structure of the car, we can say farewell to distorsions, as both audio systems from Harman Kardon or Bang&Olufsen offer a crisp and clear bass sound, that enables a concert hall ambience.

As his brothers from the S family, the SL will provide a high level of safety, the best in its segment. From the standard equipment list, we mention Neck-Pro headrests, Pre-Safe, Attention Assist and Adaptive Brake. The option list includes Distronic Plus, an automatic parking system. Multimedia system Comand with 17,8 cm TFT display and a 800 x 480 pixel resolution is standard on SL 500 and holds out the internet access, new apps and it also has a DVD changer.