S-Class Coupe: The Pinnacle of the Car Industry

The new luxury coupe from Mercedes come back to S-Class Coupe name, is based on S-Class sedan platform and show a superb design in which refined sportiness meet modern luxury and pioneering technology. For the first time is available as 4Matic also.

The traditional rivality between Mercedes, Audi and BMW does not make sense in the high society of car industry. Why? Because here only Mercedes has an offer: the new S-Class Coupe as a succesor of old CL generation. It should compete with an Audi A9 or BMW 9 Serie but these cars are only on paper at competition. The new S-Class Coupe featured a totally new era in design far from baroc and massive style of old generations. The low front grille which incorporates Mercedes three point star supported by a single louvre remind from SLS AMG, meanwhile sleek profile defined by dome shaped streched roof line and the frameless doors blend a new sporty character with modern luxury. Typical for luxury Mercedes coupes, chrome frame around glass areas is formed from one piece thanks to missing of B pillars. Impression of refined sportiness continue also to the rear of the car where the chrome trim connect the sleek tail lights made from two pieces which incorporate two horizontal rows of LEDs.

LEDs are present everywhere on and in this car which require no any bulbs like S-Class sedan. Over 450 LEDs could be found in this car: 43 LEDs on each headlamp, 39 LEDs on each tail light and approx. 300 LEDs for interior. And if light is not enough a panoramic roof of 1,2 sqm (150% more than in old generation) is available also optional with  Magic Sky Control which allows to alterate the transparency of the roof at the push of a button. Optional, is available Intelligent Light System with 47 Swarowski crystals. 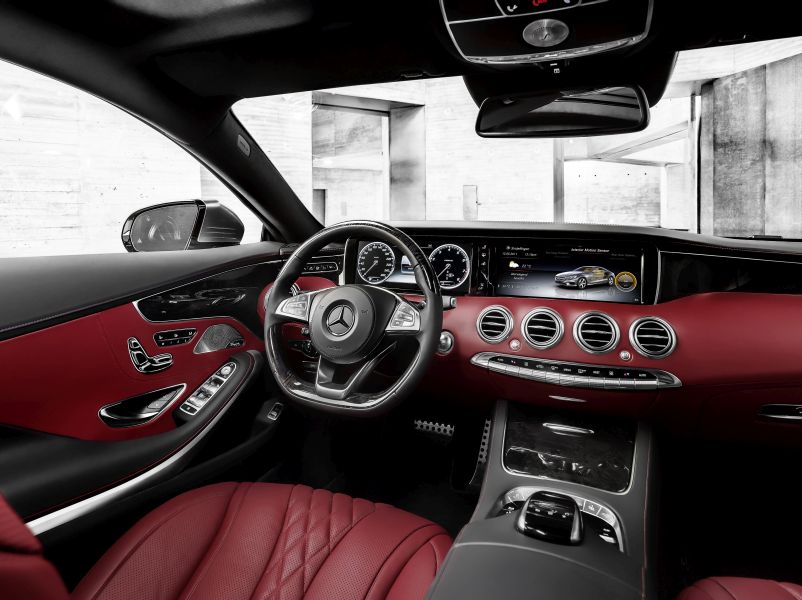 The dashboard follow the layout from S-Class sedan with two TFT 12.3 inch displays but there are also particularities to the coupe like sporty elevated central console which extends to the rear and the new super sport steering wheel. A modern luxury impression is created by the air vents, switches and trim elements in electroplated silver shadow which are combined with new interior colours like bengal red, saddle brown (in the pictures) or porcelain. Option list include AMG Line, Exclusive package, Seat Comfort package for front seats (multicontour active seats with massage), air balance package and Warmth comfort package. Like at other models, an Edition 1 package is offered for a limited period. The drive train is similar with S-Class saloon: 4-link front axle with anti-roll bar connected directly on the steering knuckle and multilink rear axle with torsion bar stabiliser, wheels with diameter from 18 to 20 inch.

S-Class coupe comes standard with Airmatic suspension which is 10 mm lower than in S-Class saloon. At higher speeds, vehicle level is lowered by a further 10 mm. For poor roads, driver can select a 40 mm vehicle level. Also, driver could select from a switch from central console two diferent damper configurations: Sport and Comfort. An alternative to Airmatic is Active Body Control which could be combine with Magic Body Control with Road Surface Scan and new world first curve tilting function. The level of suspension is reduced by 40 mm at higher speeds and raised with 40 mm in case of poor roads (30 mm for USA and Canada). ABC is the base for Magic Body Control which like in S-Class saloon is able to recognise the surface undulations in advance thanks to Road Surface Scan based on a camera which it works in good vizibility at speeds up to 130 km/h.

Another function is curve tilting function which allow the vehicle to incline automatically and continuosly on bends. For the first time in history of luxury coupes from Mercedes, all versions are offered with 4Matic. To be more precise, S 500 4Matic is offered at the start exlusively with 4Matic. 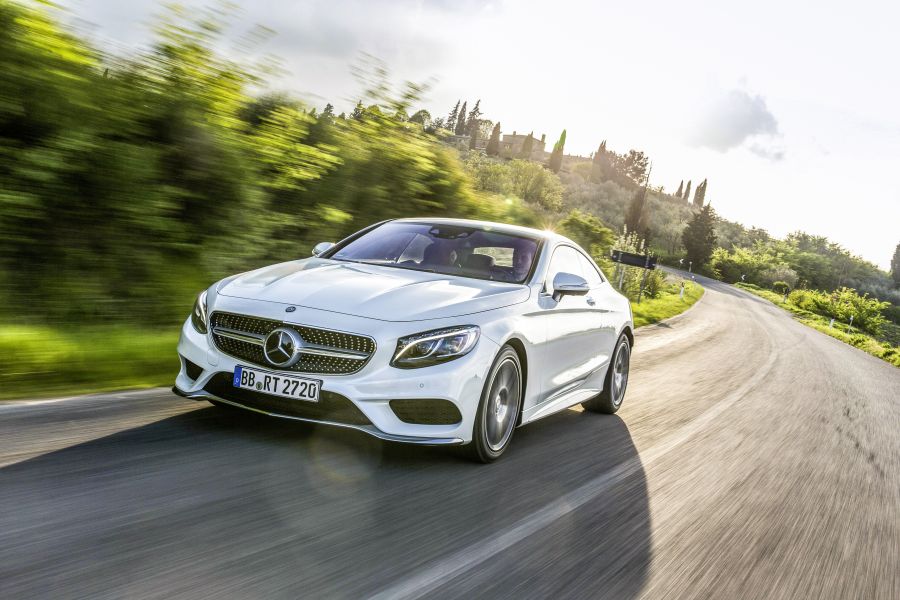 Mercedes declare a 65 kg weight saving in S 63 AMG Coupe due to use of a lithium-ion battery, forged alloy wheels and high performance composite braking system. So, the power to weight ratio of S 63 AMG Coupe is only 3,41 kg/HP, which allows an acceleration from 0 to 100 km/h in only 3.9 seconds (4.6 seconds for S 500). With a Cx of only 0.27 for S 500 4Matic Coupe with 18 inch wheels thanks to an optimized aerodynamics (optimized underbody panelling concept, suspension lowered with 10 mm, sealing around headlamps, wheel spoilers with optimum flow ahead), Mercedes claim that S Class Coupe has the lowest wind noise in the world. Until the first test we cannot confirm but having in mind exceptional low wind noise in S-Class saloon, this declaration cannot be a hazardous afirmation. The market launch for both versions will follow in september. The model range will be completed with S 65 AMG Coupe. Prices in Germany are (including 19% german VAT): S 500 4Matic 125.962 euro, S 63 AMG Coupe 166.589 euro, S 63 AMG Coupe 4Matic 170.587 euro, S 65 AMG Coupe 244.010 euro