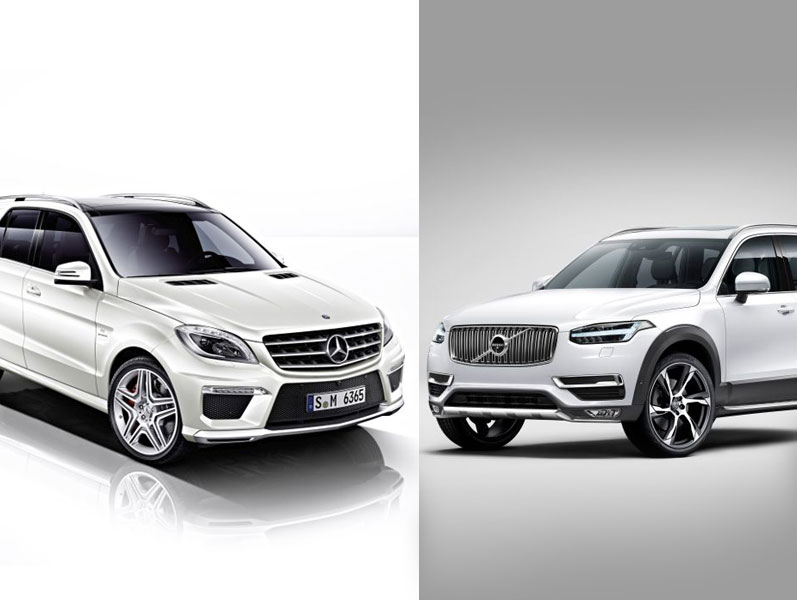 Is this new Volvo XC90 a competitor for the Mercedes ML? First static comparison.

12 years later, Volvo launches the second XC90 generation, which practically restarts the Swedish brand with a new design and the new SPA platform. Could Volvo XC90 compete against the Mercedes ML, if it only has 4-cylinder engines?

In the Ford era, Volvo officials considered Volvo as a premium brand. They have premium prices, but they have never reached the technical refinement of the German brands. Now, with Chinese capital in, Volvo starts a new chapter, after 87 years of history. And the chapter starts with a new design and a new platform (SPA – Scalable Platform Architecture), that Volvo claims to be very flexible. How will Volvo XC90 face the premium competition of Mercedes ML and BMW X5?

The Swedish came up with seven seats and state that, on the third row, people up to 1,70 meter tall can take a seat. The seats from the second row are individual and they can slide forward to eliberate more kneeroom for the passengers in the third row.

The Mercedes ML only offers five seats, but these seats are very generous. The ML has the the most spacious interior of the segment.

It seems that the Volvo XC90 has done an upgrade regarding the assistance systems, but it does not have features which are not also available in the Mercedes.

Volvo provides a range of two diesels, two petrol and a Plug-In Hybrid.

Surprisingly, Volvo also competes against the top range Mercedes ML 500 (V8 bi-turbo, 4,7 litre, 408 HP, 600 Nm) with a Plug-In Hybrid, which puts together a 2 litre petrol turbo with compressor and turbo with an electric engine of 80 HP and offers a total of 400 HP and 640 Nm. But in this case awd system seems to not be well prepared for off-road. The thermic engine drives the front wheels and the electric engine the rear wheels, a system used also by Lexus. As in Lexus, this solution is only for soft offroad, meanwhile the 4Matic in the Mercedes is much more capable.

Volvo also claim that they are replacing almost all the buttons and switches with the functions of a tablet. They probably got the idea from the Tesla and it is a very modern approach. But first, we have to actually see how intuitive the ergonomy is. The Mercedes has, in the ML, the old multifunctional Comand inspired from the menus of the former S-Class. But sometimes  “less is not more” and the presence of more switches is not a disadvantage. For example, the modern Porsche uses the jet inspired central console with a multitude of switches again.

Volvo also imitates the marketing strategy of Mercedes and, at the very start of the sales, they offer a limited serie of 1927 units (the year of the Volvo birth) named First Edition, combined with a D5 diesel or with T6 turbo. Volvo has not announced complete technical data and prices yet.

Who is the king of off-road? Mercedes GLE vs competition