Mercedes will launch an armada of new models in 2018. We present here the full list of the new models of 2018 with the main details. The most important are the new A-Class with a fully new interior concept and a sedan version, the new CLS and the new G-Class, the AMG GT4 – the second AMG independent model in the range and the facelift of the whole versions of the C-Class bestseller.

Presented at the Los Angeles Motor Show, the brand-new Mercedes-Benz CLS brings the high-end technology of the upper class. The S-Class lends the Intelligent Drive system, that integrates the latest generation of the driving assistance systems, as the Driving Assistance Package provides route-based driver support. The Active Brake Assist, the Lane Keeping Assist, the Attention Assist, the Speed Limit Assist and the occupant protection system PRE-SAFE are fitted as standard, as well as the PRE-SAFE Sound that made its debut with the E-Class. The ultra-smart CLS can now automatically adjust speed ahead of bends or junctions and can automatically change lanes. 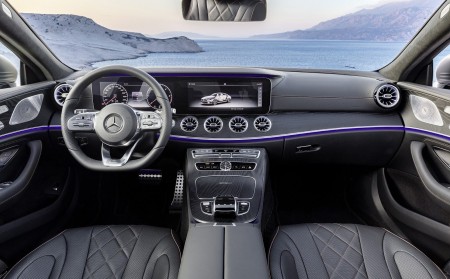 The world’s first 4-door coupe comes with basic pure lines and color combinations that emphasize the spaciousness of the car that, for the first time, has turned into a five-seater, with seats exclusively designed for this very model. The CLS features the dual screen layout with two 12.3-inch displays beneath a single glass surface, while the 64-color illuminated air vents are a fine recall of the jet aircraft turbines. The driver has the liberty to configure the information content into Classic, Sport and Progressive styles, according to the driving situation.

The exterior design of the CLS continues the sensual lines of the interior. Its aggressive, sleek, yet elegant silhouette, integrating new headlights and taillights make it look more svelte than ever, yet keep its solid stance on the ground. The CLS is a pioneer in terms of lighting, as the ULTRA RANGE high beam of the MULTIBEAM LED headlamps generate the maximum light intensity permitted by the law.

With a Cd of 0.26, the CLS coupe melts the sharp edges of the sensual silhouette that starts with a striking front-end that includes the diamond grille widening towards the base, split in two by a single louver, supporting the 3-pointed star. 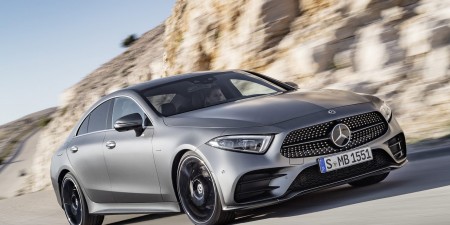 The CLS models come with a completely range of engines. Three six-cylinder power units will be available on market launch. The 6-inline 2.9-liter CLS 350 d 4MATIC will go as far as 286 HP, the CLS 400 d 4MATIC will benefit from an output of 340 HP, while the most powerful variant, the CLS 450 4MATIC, gets the 48V electric system and the EQ boost (with additional 22 HP) that provide it with hybrid facilities, taking the car as high as 367 HP and making it run the 0 to 100 km/h distance in 4.8 seconds only.

The comfort of the luxury interior also gets an extra boost, coming from the 4-link front suspension and the 5-link rear suspension, which are optionally provided. Also offered as an option, the Dynamic Body Control suspension features a sporty basic setup including adjustable damping on both axles. The driver can select from Comfort, Sport and Sport+.


The one of the most luxurious cabriolets in the world will start in April only with the V8 ( S 560 Cabrio, S 63 AMG 4Matic+) and the v12 (S 65 AMG) engines. Compared to the coupe model, the cabriolet will not get the 3-liter V6 unit.
The new S-Class Cabriolet is fitted with the latest generation of the Comand Online system with the two new brilliant 12.3-inch displays and got the new assistance systems with extended functions from the S-Class. 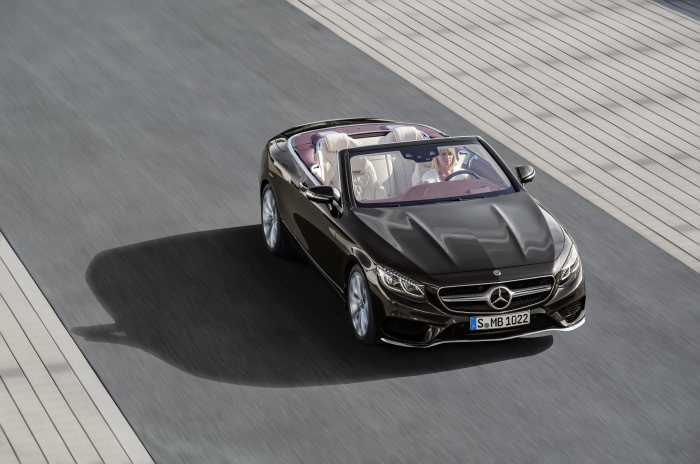 May 2018 – The Mercedes A-Class fourth generation

According to the new marketing policy, Mercedes has revealed the new interior concept of the fourth A-Class generation in the first phase. The new A-Class will be available from May 2018. The interior concept is completely new. The classical dashboard indicators and the old 4:3 format multimedia display have disappeared. Both were replaced by a new elongated screen, placed on the upper half of the dashboard. Even the standard version will have digital main indicators with two 7-inch screens. Two optional versions will follow: one with a 7-inch and with a 10.25-inch display and one with two 10.25-inch screens. You can find the main switches of the air conditioning system below the three new central sporty vents in a turbine-look, but the AC display has been integrated into the central screen.

The new steering wheel was carried over from the S-Class, while the front seats have comfort features available from higher segments, including seat climate control, massage function and multicontour seats.

Mercedes promises more space and better 360-degree visibility. All interior dimensions have increased: more shoulder-room (front +9 mm, rear +22 mm), elbow-room (front +35 mm, rear +36 mm) and headroom (front +7 mm, rear +8 mm). Mercedes has also announced a better access to the rear seats. The luggage compartment will have a capacity of 370 liters – 29 liters more than before, while the access to the luggage will be easier thanks to the new two-section rear lights which increased the loading aperture by 20 cm.

June 2018 – Mercedes-Benz G-Class
Inching closer to its debut at the Detroit Motor Show, scheduled for January, the 15th, the Mercedes-Benz G-Class has already been revealed, half intentionally and half by leaked images, most of its goodies. The three lock differentials stand their ground, together with the grab handle for the front passenger. But the brand-new G-Class now receives a fully redesigned instrument panel with – enthusiasts, rejoice! – analogue dials fitted as standard. Provided as options are the digital large display showing the virtual instrument, together with a central display positioned above the central console, but also the two 12.3-inch displays merged beneath a glass cover, like in the E- and the S-Class sedans. The driver may choose between the “Classic”, “Sport” and “Progressive” styles. The steering wheel, like that of the upper class sedans, comes with touch-sensitive controls that respond to swiping motions similar to a smartphone. 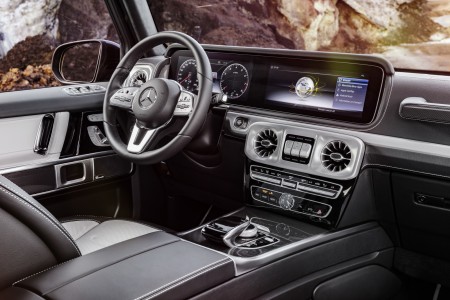 The 2019 G-Class brings the Burmester surround system with 16 speakers and a 590-watt amplifier as optional equipment. The extended wheelbase and track bring more space for the driver and the passengers, who comfortably sit in seats that feature heating and the Active Multicontour package.

Highly customizable, with a wide range of equipment options, there is practically impossible for two G-Class models to be alike. With standard black Lugano leather seats, nut brown or macchiato beige, the vehicle can also receive the Exclusive Interior and the Exclusive Interior Plus packages, with the latter being available in seven colors. For the AMG Line, the black seats – red contrasting topstitching combo is available, accompanied by a sporty steering wheel with flattened bottom section.

The new generation G has gone on a diet, as the new platform makes it shed up to 400 kilograms. The leaked photos of the exterior confirm the iconic off-road capabilities of the G, that is now wider and goes higher, receiving a ground clearance increased by 6 mm. 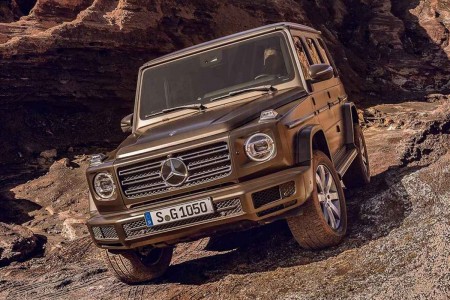 The C-Class will be subjected in the spring of 2018 to a comprehensive model update which will see the C gain the dual-screen cockpit layout of its bigger brothers, as well as new headlights with LED technology. Among the most important changes is the introduction of the electronic architecture of the E-Class, which makes all new systems and applications of the big brother accessible to the C-Class as well, so the C-Class will be equipped for autonomous driving level 2. In terms of engines, the Mercedes C-Class model year 2018 gets the new family of the diesel unit, known as the OM654. The 200 d will offer 150 HP, the 220 d – 194 HP and the 300 d – 230 HP.
In the gasoline department, a new 2-liter turbo engine with 272 HP will appear under the hood of the C 300. The C 400 will switch from the V6 to the new 6-inline 3-liter engine.
The C 350 e Plug-In Hybrid version will get a bigger battery, which will increase the electric range to over 70 km.
The C-Class facelift will be presented at the Geneva Motor Show, in March.
According to the auto motor und sport magazine, all C-Class bodies will be facelifted in the same time.

The Mercedes-AMG GT4 will be the second model in the current range after the AMG GT which does not have a correspondent in the Mercedes model range.
The four door sports coupe was announced by the study AMG GT Concept presented at the Geneva Motor Show. The study came in a Plug-In Hybrid version with the four liter twin-turbo V8 supported by an electric motor. Total output: 816 HP.
The series model will get the four liter twin-turbo V8 at the start with over 600 HP. Because there is no space, the AMG GT4 will not carry transaxle solution from the AMG GT and will use a modified platform of the E-Class on which was grafted the all wheel steering of the AMG GT 4. Some design elements like the Panamericana grill, headlights drawn far into the fenders and narrow taillights will be taken over from the AMG GT. The Plug-In Hybrid version similar with the concept propulsion shown at the Geneva Motor Show will arrive in 2019.

It is not clear if the new CLS will get an AMG version because the new AMG GT4 will act probably as an CLS 63 AMG successor and the expected price is above the level of the former CLS 63 AMG  which was 135,000 euro.
The CLS four-door coupe will be available also on the market this year in March.

The fourth generation A-Class will have a new body version – a sedan which will be offered alongside with the new CLA. The A-Class sedan will compete with the curent Audi A3 sedan,  the BMW 1 Serie sedan and the very probably Volvo S40 sedan. The A-Class sedan will start in China in November 2018 and should come to Europe on a later stage.
Mercedes had already given a first look of the design in early 2017 at the fair in Shanghai with the study “Concept A Sedan”. This show car not only anticipated the future design of the A-Class, but also presented itself in a coupé-like style.

Many elements from the concept will be carried over to the series model and the changes will be only marginal. The A-pillar remains as wide as the hatchback while the boot compartment will not be quite as dynamic because Mercedes has to leave room also for the future CLA. But the series model will take over the exterior mirrors mounted on the door sill, the distinct sills in the side view and the long panoramic roof. 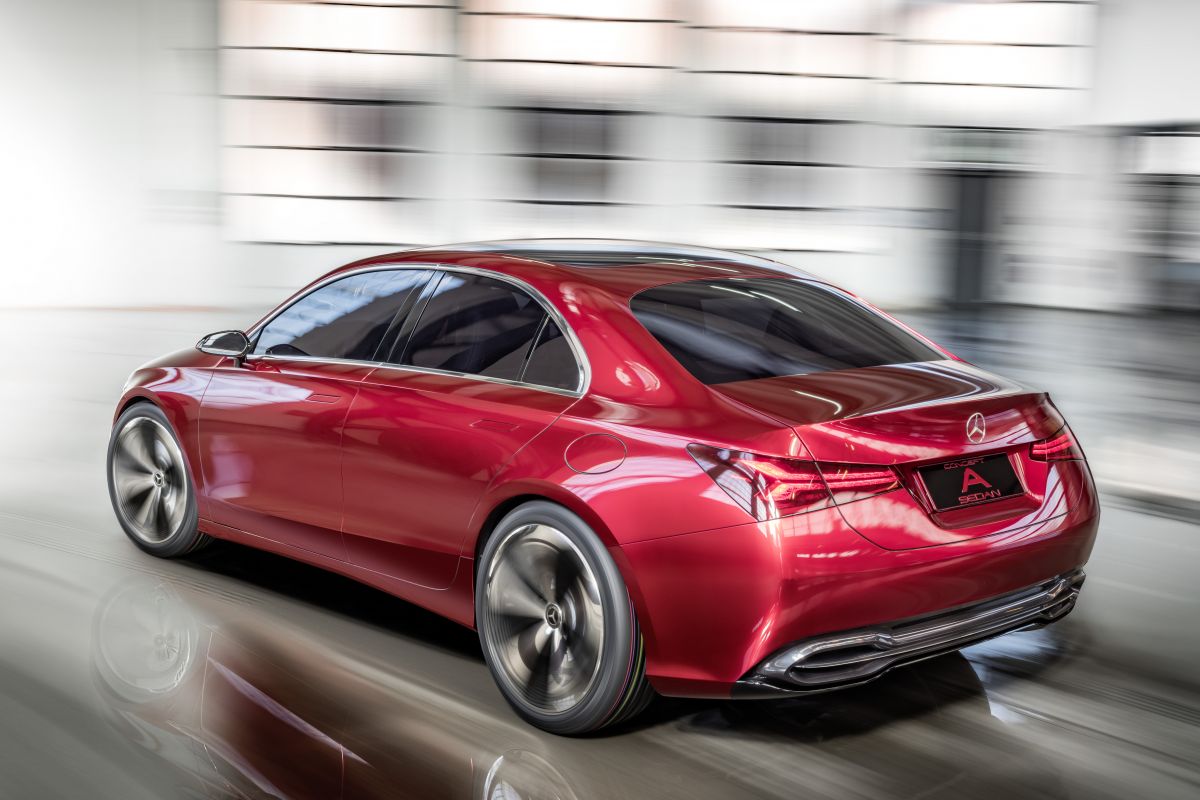 A-Class Sedan will increase to number of the compact family to 8 members (hatch, CLA, CLA Shooting Brake, GLA, B-Class, GLB – a seven seater GLA, the SLA roadster speculation and the sedan) and will be based on the new MFA2 platform which promis a lower center of gravity, lower kerbweight and a 2 inch longer wheelbase.
The interior will be the same with the new A-Class and even the basic version will get a dashboard with two 7 inch screens.

A-Class sedan will be available with a wider range of engines from the new A-Class and we expect that the sedan will be 2,000 euro more expensive than the hatch.