Is this the new Mercedes-AMG SL Shooting Brake? Nope, it’s just a render

The curtain has dropped leaving the new Mercedes-AMG SL in the spotlight. But the car just revealed has already sparked the imagination of digital artists. What would it look like in the shape of the shooting brake?

The thought never came across the minds of the Mercedes-AMG engineers that developed the SL for the first time. The car was designed as a 2+2 convertible, bringing back the tradition of the canvas roof, with a mechanism that is 21 kilograms lighter than the previous one.

But the sleek silhouette of the convertible made a digital artist wonder: what if the Mercedes-AMG SL became a Shooting Brake? Going by the name of Theottle, he simply redesigned the car. Actually, “simply” is just a matter of speech, because there isn’t anything simple about his work.

He mounted an elongated rigid roof on the new Mercedes-AMG SL Shooting Brake with a sloping line on the car and put up C pillars to support it. He therefore modified the rear end, replacing the boot lid with a fifth door and adding a tail wing to enhance aerodynamics. There is also a wing extending from the roof. Theottle could have gone for a four-door variant to make it more practical and make it a rival for the Porsche Panamera. This way, it is very unlikely that a family with children would be able to put the kids in the back seats. Those are the seats, remember, that can – according to Mercedes – sit people of up to 1,50 meters. 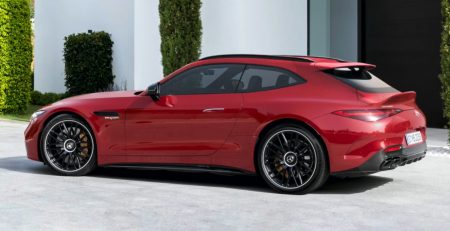