Mercedes-Benz delays the arrival of the EQC in the US

Mercedes-Benz is delaying he arrival of the EQC in the US. It won’t arrive in the States earlier than 2021. The electric Benz was initially scheduled to cross the Atlantic in 2020.

Launched in Europe in 2018, the Mercedes-Benz EQC has to follow a different strategy for the American market. Daimler first planned the “strategic decision to first support the growing customer demand for the EQC”. Despite the “high interest worldwide”, the American customers will still have to wait.

The United States of America is the second biggest car market in the world after China, trying to keep up with Europe in the electric segment, where the European Commission required car makers across the continent to lower the emission level of their car fleet by 37.5 by 2030.

Across the Ocean, President Donald Trump is fighting the Obama-era emissions regulations, which he finds to be uselessly strict. 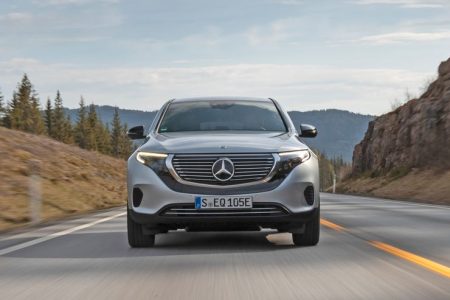 What does Mercedes-Benz fears when it comes to the EQC in the US?

There is something else that Mercedes-Benz fears in the US. With an approximately 200-mile range provided by the 80 kWh battery, the EQC offers less for more money compared to its main competitor, Tesla, who has rolled off the Model Y, with a starting price of $75,000. The EQC is quoted at $86,000. Audi E-Tron and Jaguar I-Pace are also fighting the supremacy of the company from the Silicon Valley.

The local market is scaring off car makers that are planning to conquer Europe and China with their zero-emission vehicles. Volkswagen has already announced that the first member of the new IQ family, the ID.3 hatchback, will not be exported to the United States.

The EQC is the first member of the EQ sub-brand. Daimler has promised to roll out no less than 10 electric cars by 2022, but which one of them will make it to the US is still in question. The EQA and the EQB and are testing on public roads, as spy photos have revealed, ready to make an entry next year. Meanwhile, the EQS sedan has been teased by the company. The model may arrive next year as well.