Elena Luchian, October 2, 2020
2.46K 0
Home Auto news Funny ad shows how customers have to train in order to get a Mercedes-Benz G-Class

You don’t just get a Mercedes-Benz G-Class, pay for it and go home with it. You have to actually earn one. Or so claims the latest ad promoting the premium off-roader.

Does the iconic Mercedes-Benz G-Class still need advertising? The premium car maker seems to think that it is never too much and they would stop at nothing when it comes to their most long-lasting model.

The video shows how a future owner should prepare for owning such a model. “It is a glorious day”, Rob Branston finds out. Rob is the young man who purchased a brand-new G and is ready to pick it up. But he can’t just go to the dealership and drive home with the car. The receptionist takes the responsibility of bringing the information necessary to his attention. 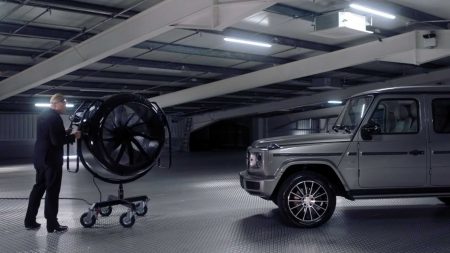 “Mr. Branston, the Mercedes G-Class is capable of things you would not believe”, the redhead receptionist informs him in a convinced tone. A tall serious man walks in and taps his shoulder and takes him to the hall where the first test takes place. Rob thinks the test, that involves a fan and sand, is about aerodynamics of his new car. But he is terribly wrong. The one put to the test is himself. The scenario is simple: he is driving through the desert, climbing the sand dunes with windows down.

Rob’s mother steps in and she is also the subject of a test. It is a rodeo-like exam. The woman climbs up on a mechanical bull. Despite Rob’s worries, his mother is riding the machine as if she has been taking part in rodeos her entire life.

Once the test is over, Rob and his mother are ready to get their hands on the new Mercedes-Benz G-Class. The video ends with the woman buckling up and holding the handle in the dashboard and saying: “Hit it, Robbie!” It is obvious that she is ready to enjoy all the capabilities of the G.