With the letter S in its name, Mercedes EQS promise a lot: comfort, safety and sovereignty. Does the new Mercedes EQS offers all of these qualities? The first test with the basic version Mercedes EQS 450+ made by colleagues from german magazine auto motor und sport.

Jens Dralle from auto motor und sport is very categorical: Mercedes EQS is driving fantastic. And, he says, you don’t need to drive many hundreds of miles to reach that conclusion. But if you want, you can do it because the battery of 107.8 kWh (there will be a version with a smaller battery, with around 90 kWh) gives a real range of over 680 km without going with 30 km/h. Indeed, it is less than the 780 km WLTP official figure but still the real range is impressive. And you can charge at DC stations with up to 200 kW enough energy in just 15 minutes to travel 300 km.

More agile than S-Class, the same level of comfort

Very unusual in the luxury class, the Mercedes EQS has a two-volume hatch body and a large tailgate. but despite this configuration, the interior is very quiet. Not only because of the synchronous motor with permanent magnets that immediately develops 245 kW and 568 Nm and even faster than immediately in Sport mode while immersing yourself in very generously sized soft seats.

To remove any interference that may occur in the trunk which is not separated from the interior, the engineers filled the cavities in the body with foam. 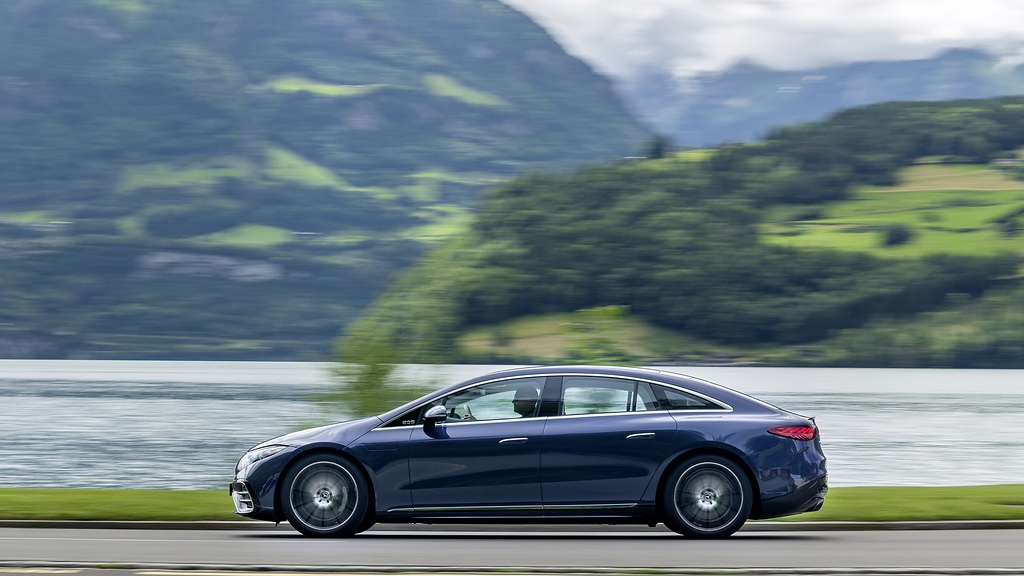 At first glance, the kerbweight of 2480 kg seems quite large, but we must keep in mind that 670 kg weighs only the battery and that we are talking about a luxury class model with a length of 5.22 meters and a generous wheelbase of 3.21 meters.

Yes, the interior space is generous but Mercedes wants the EQS to be perceived primarily as a driving machine. Interesting approach because the S-Class is perceived as a car with driver. In support of the argument that EQS is a driving machine comes the incisive and direct steering that surprises a little.

Because this feeling of sporty steering brings some uneasiness in the general quiet atmosphere. Until you get used to it. Also, compared to the S-Class, the body of the EQS has a smaller roll and leans less in corners. The optional 21-inch wheels (19-inch series) make some noise when passing over potholes. This also happens with S-Class equipped with the same optional wheels, but in this case, the noise is muffled before it reaches the passengers. 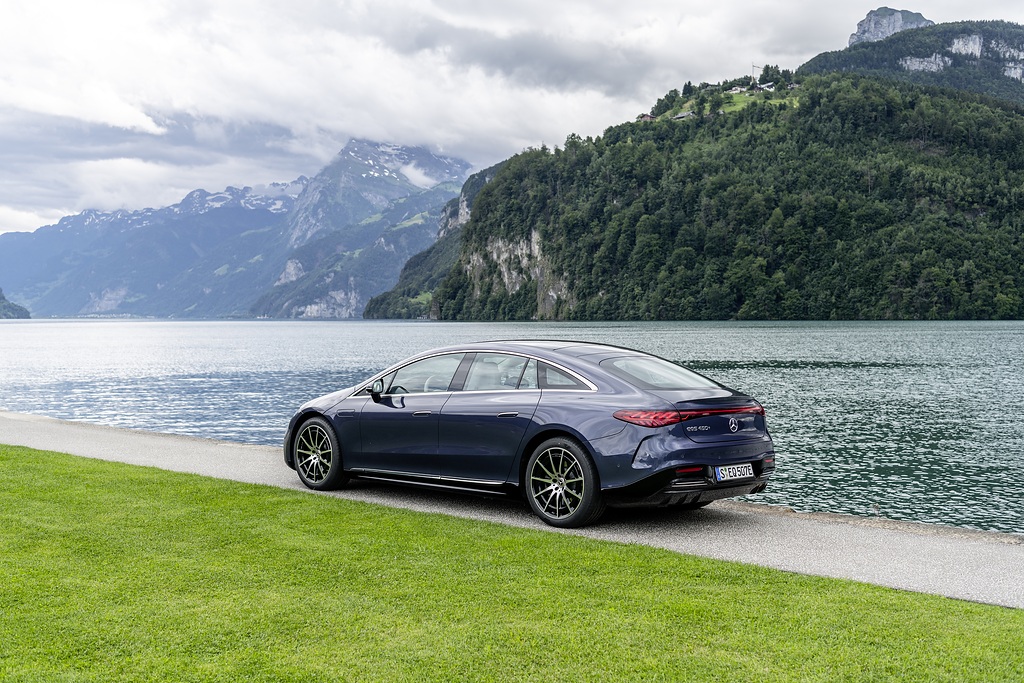 So, the first conclusion. Is the Mercedes EQS less comfortable than the S-Class? Not. EQS is driven as sovereignly as the S-Class but somewhat more agile. And if you give up the large 21-inch wheels, you will also enjoy the best comfort of the suspension.

We must also remember that EQS is based on a dedicated electrical platform, totally different from that of the S-Class, in which the large battery with 12 modules is located between the axles. Thus, a long wheelbase has resulted which is similar to that of the long version of the S-Class.

How does it behave on winding roads?

Optionally, you can order the integral steering with a steering angle of up to 10 degrees. This can be ordered over-the-air later as an annual subscription or when purchasing the car. In this case, the turning circle is reduced to a level of a  middle class model.

Mercedes EQS drives agilely and easily on winding roads because it has a low center of gravity. Only when you accelerate strongly, the EQS rises slightly with the front and presses more on the rear axle.

The paddles on the steering wheel are not used for changing gears but for different degrees of energy recovery. Thus, you can leave the car in D-Auto. In this case the energy is recovered with a deceleration of up to 5 m/s2 (3 m/s2 by recovery itself and 2 m/s2 by parking brake). Up to 290 kW can be recovered in the all-wheel drive version. Then, the driver has at his disposal three other degrees of recovery D +, D and D- as well as a coasting function. On D Auto, EQS you can drive in One pedal mode.

And now let’s enjoy the power. The Mercedes EQS 450+ runs a single engine on the rear axle while the top model Mercedes EQS 580 has two engines, one on each axle.

But also the basic Mercedes EQS 450+ is enough to experience the ultimate luxury of the vehicle. It develops immense power in a strange silence. There is no petrol engine that offers the same sovereignty, maybe only the new 6-cylinder diesel and of course a V12.

This is exactly where Mercedes wants to position with the EQS 450+, at the level of the S 400 d which starts at 109,000 euros. We will know exactly at the beginning of August when the prices will be announced.

Level 3 of autonomous driving is ready, we expect homologation

Mercedes announces that it has prepared level 3 autonomous driving, although it is not yet homologated. But Mercedes hopes it will be approved because it intends to offer at the end of the year in the price list the system Drive Pilot – autonomous driving level 3. For now only in Germany, only on the highway, only up to 60 km/h and only in good weather . The system reports when it can be activated via a key on the steering wheel. 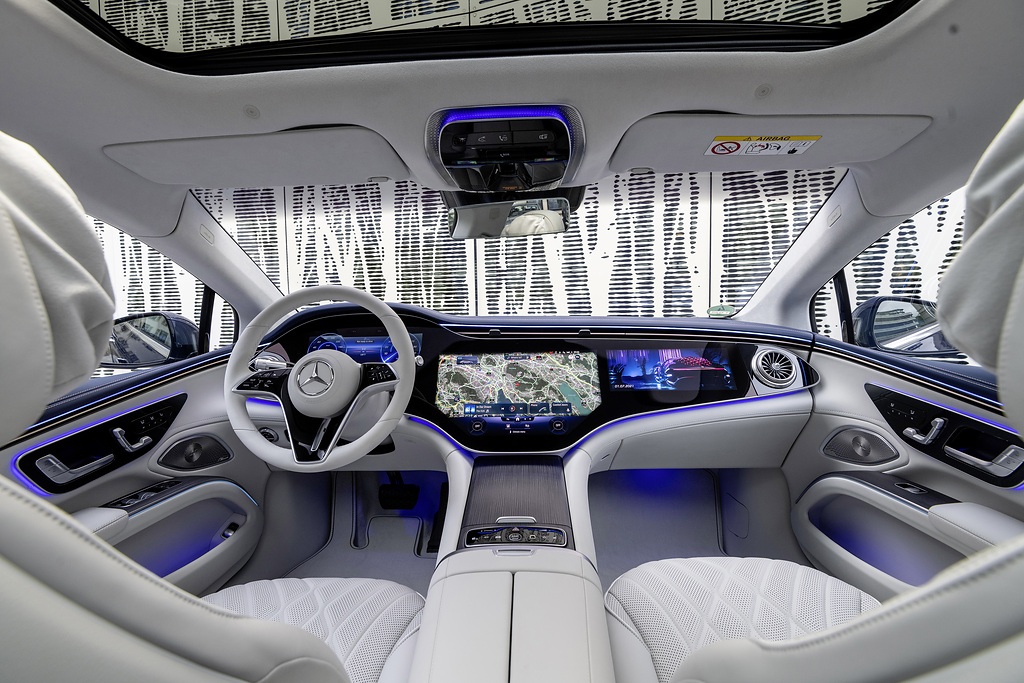 Impressive is the dashboard with the new optional Hyperscreen screen: 1.41 m wide covered with a 2 mm aluminum silicate under which are hidden three LCD screens, 12.3 inches for the driver, 17.7 inches in the center and 12, 3 inches for the passenger, the last two with OLED technology. The operating system is based on MBUX from the other Mecedes models, the navigation through the menus being logical and the readability is very good.

3D effect on the instrument cluster? Not available as is the case with the S-Class. But you better enjoy the revolutionary 3D head-up display that displays the information in front of the car like a huge TV.

The verdict of the colleague from motor and sports is as clear as possible: As in the case of the S-Class with conventional engines, the combination of explosive power and the greatest possible silence is impressive. Also, the Mercedes EQS 450+ offers a high level of comfort but not with 21-inch wheels. The maneuverability is also impressive. However, the Mercedes EQS will be a privilege for quite a few people because of the high price.