Mercedes-AMG had to face a crucial mission: replacing the C 63 AMG, the most successful AMG model, with almost 40,000 units sold since 2007 till present. It was a large-scale event that meant more than just replacing a model. The outcome ? Three models and two concepts, from which one is brand new: the Mercedes-AMG C 63 S AMG and the C 63 AMG top AMG models and the AMG sport line-up with the C 450 AMG 4Matic.

But let’s take it step by step. Instead of the previous C 63 AMG and the aspirated 6.2 litre V8 engine, Mercedes-Benz now offers two models: C 63 S AMG and C 63 AMG. Both of them hide under the hood a similar engine to the AMG GT. The new bi-turbo 4.0 litre V8 with direct injection that develops 476 HP or 510 HP for the S version is disguised under the M117 code name. I really meant when I said “similar” because the C 63 engine has a wet sump while the AMG GT engine (code name M178) used the dry sump because it has to be mounted as low as possible in the car. Furthermore, for the M177, the air filters are fitted above the engine, while in the AMG GT, they are installed in front of the engine.

Just like the AMG GT, both turbos are mounted inside the V providing clear advantages regarding the compactness, the quick response and low CO2 emissions. Mercedes-Benz revolutionized the turbo engines in V configuration because they have found a simple solution for cooling both turbos.
The air flow is guided under the hood towards an air intake mounted above the radiator. The flap covering the air intakes is powered only by the air flow’s speed that is produced when the car is moving. Then, the aluminium lid covering the turbines guides the air towards the turbines and after that, it sends it down under the car. 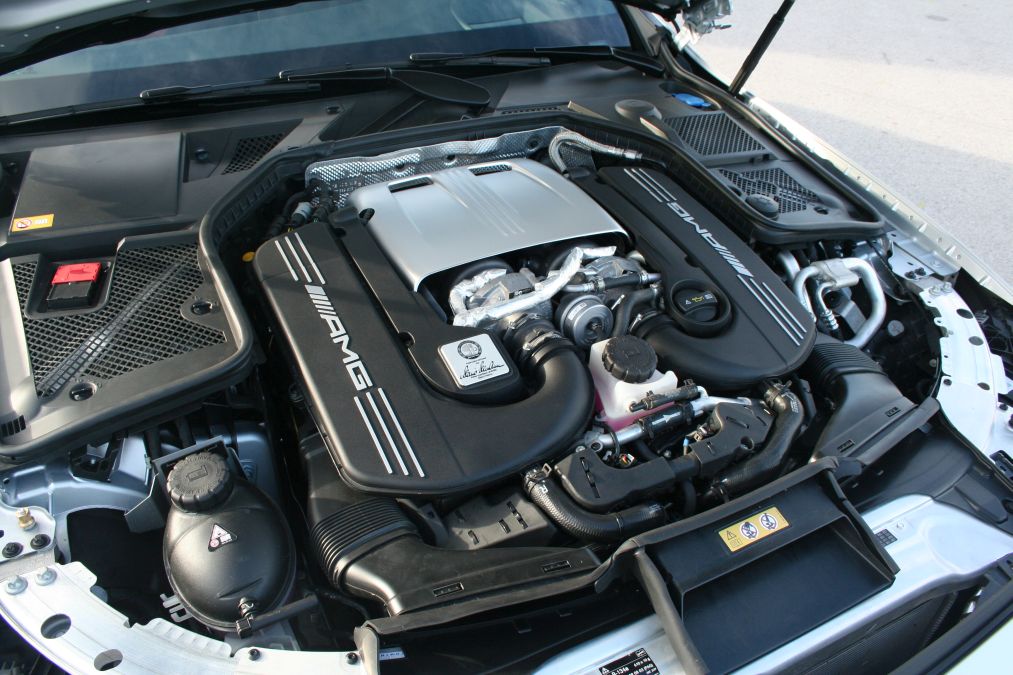 The C 63 S also has a dynamic support for the engine just like the more expensive Porsche 911 Turbo.
Because of an announced fuel consumption of just 8.2 l/100 km for both versions, Mercedes says that its V8 is the most economical V8 in the world.

This is further enhanced because Mercedes maintained the same weight. With a kerbweight of 1640 kg, the C 63 AMG is 15 kg lighter than the previous generation, and C 63 S AMG weighs 1,655 kg, just like the previous model.

Unlike the E-Class or S-Class AMG versions, the C 63 AMG has only rear-wheel drive versions, as the power is directed to the wheels through a 7-speed automatic wet clutch transmission, with an improved response time.

The brand new drive train has an array of tweaks: five for engine, gearbox, steering named AMG Dynamic Select (Comfort, Sport, Sport+, Race – available only for the C 63 S – and Individual), three for the AMG Ride Control adaptive suspension and three for the ESP system (ESP On, ESP Handling Mode, an electronic trainer that allows drifts, and ESP Off for the race-track). On the Individual mode you can select whatever combinations you want. For instance, you can set the suspension on Comfort, the engine on Race and the exhaust system on Sport+ and the ESP on Handling Mode. But let’s not forget about engine’s sound that can be adjusted after the selected transmission mode, but also individually through pressing a button, thus generating an additional emotion compared to the direct competitor – BMW M3/M4.

The sound system Performance Exhaust System comes in as optional for both versions and it comprises three flaps, one mounted in the first third of the exhaust way and the last two in the final areas. On Comfort and Sport the sound is mellow, while on Sport+ or Race mode the sound makes you feel like you’re driving a DTM racing car.

The front axle takes over the multilink layout with four links from the C-Class and it has a 31 mm wider track (the aluminium fenders  extend 14 mm in the exterior), while both axles have a greater negative camber angle. The anti-roll bars are thicker and the suspension was 25 mm lowered. Mercedes-Benz offers AMG Sport Ride Control adaptive suspension as standard, which allows the selection of three modes: Comfort, Sport and Sport+.

The braking system uses 360 mm ventilated and perforated disc brakes for all wheels, while the C 63 S benefits from 390 mm composite brake discs at the front axle with red callipers. For the first time, the C 63 S is available as an option with 402 mm ceramic brake discs on the front axle.

Even though it is based on C-Class interior, the ambiance is personalized with the multifunctional Performance steering wheel in three spikes, flat at the bottom, the aluminium pedal box, the central console in carbon fiber and the Performance seats that provide an outstanding support (optional) and multiple tweaks (the backside and the backrest can be tighten around you through an electric control from two buttons), the controls on the dashboard AMG customized with the speedometer up to 320 km/h and other AMG specific instructions like the boost pressure, memory lap time and a white, yellow and red 8 LEDs indicator in the Head-Up display, that specifies when exactly it’s time to switch the gears on Manual mode.

There is also a Last Mode function that allows memorizing for 4 hours the drive train’s last setting when you used the Individual mode.

Like other Mercedes-Benz models, the C 63 S is available as an option with the Edition 1 package that has, among other things, a special leather tapestry in grid with red stitching, matte paint and an exterior package with side sills, diffuser, carbon fiber rear wing (the rear wing is usually made from steel and painted in the same colour as the car.)

At the first drive test, what really stands out from the very first moment is the incredible bi-turbo V8 engine. Dreadfully advanced but in a good way, the engine delivers performances that without limits. On the Comfort mode, the huge torque provides docility and flexibility in the final gears of the gearbox, but it can also transform into a beast if you choose the Sport+ mode or the Race mode. It’s extremely pleasant to drive when travelling, due to the ubiquitous torque but, when in need, you can get an extremely quick engine response even starting from low revs.

The polyvalence is one of engine’s crucial characteristics. It can transform from an untamed beast on the racetrack to an obedient natural aspirated V8.

In what concerns the C 63 S and the C 63 we surely won’t miss the previous aspirated V8 because Mercedes-Benz managed to manufacture a bi-turbo engine with a linear, in-line response as good as the most advanced aspirated engine and after that, the sound exhaust system is a truly masterpiece because if you accelerate on Sport+ or on Race you feel like you’re at the start grid at a DTM race.

The seven-speed automatic transmission switches smoothly on Comfort and the response time has been enhanced, because now it uses a wet clutch. It is by far the faster automatic gearbox that I have ever driven and surely, the fastest seven-speed automatic gearbox version ever put on a Mercedes-Benz. On the other hand, in the Sport mode on the racetrack, it lacks the “kick in the back” reaction when switching on the Sport mode, offered by a gearbox with double clutch. But for the road, this gearbox is the ideal choice because it is more comfortable and on the racetrack is suported by the the enormous torque of the engine.

The drive train is almost perfect and even the most pretentious critic would be unable to find a real flaw.

Unlike the AMG GT which is still faithful to the hydraulic steering, the C 63 S and C 63 are using an electromechanic steering which surprisingly is as sharp and exciting. It is highly accurate around the dead centre, it reacts spontaneously and gradually and the feedback is optimal even if we compare with a hydraulic steering. Furthermore, the wider track and Michelin Pilot Super Sport tyres provide an impressive grip and pushed to the limit, the C 63 S can manage lateral accelerations worthy of a supersport car. 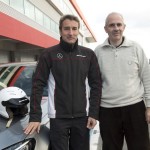 Its agility on the racetrack is truly remarkable, the V8 engine, slightly smaller, the lighter front suspension and the aluminium fenders contributed to a better weight distribution and pushed at the limit, the electronically controlled locking differential on the rear axle provides a sensational traction. Because of it you can drive through bends with high-speed and you can actually feel the superior traction. On the racetrack, you can only press once or twice the ESP button and it switches firstly to the Handling Mode, then it declutches entirely. The Handling Mode is something like an electronic racing trainer (as a joke, it’s like an electronic Bernd Schneider because the famous German driver, multiple DTM champion, he was our guide on the Portimao racetrack) which allows you to slide in a rather limited way. 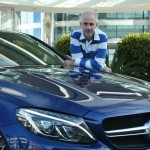 The suspension is firm in almost all settings, but the adaptive suspension now provides a polyvalence that the previous model lacked because on Comfort mode the uptake of all the small bumps on the road is clearly more efficient. On the racetrack, the Sport+ mode is ideal, but I do not recommend it on the road. For the highway the Comfort mode is the best choice, but if you drive through windy roads, then the Sport mode will be the best compromise. On bumpy roads, the extremely wide tyres produce a rolling noise. You will hear a noise on every car you will ever drive, but at the C 63 S the tyre noise when rolling is due to the fact that the wind and the engine noise are dull, while the suspension is noise-free.

Mercedes C 63 S is a huge step forward compared to the previous model. It is not only more powerful and faster, but it is the most comfortable, obviously the most economic, more polyvalent and, when needed, more incisive and more balanced than the previous model. Furthermore, the highly personalized interior ambiance compared to what the competition is offering, the best quality in the segment, the incredible sound, all of these features make the Mercedes-AMG C 63 S a more desirable car than the BMW M3. Mercedes-Benz managed to perform the switch from the aspirated engine to turbo much better than the competition.