This man has driven them all. And has got them all. From vintage to super modern, you name it, he got it. All, but not this one. Jay Leno takes the Mercedes-Benz C111-II concept borrowed from the Mercedes Classic Center for a ride in California.

In 1970, when it was first introduced at the Geneva Motor Show, the Mercedes-Benz C111-II left everyone speechless just like its predecessor had done one year earlier. Almost five decades later, the concept car, with a wedge-shaped body and gullwing doors, still has the same effect on people. And on the man that has one of the greatest car collections in the world, Jay Leno, too.

Going round and round to check every inch of the fiber-glass body, the comedian walks down the memory lane: “It knocked my socks off when I was a kid”, he tells. 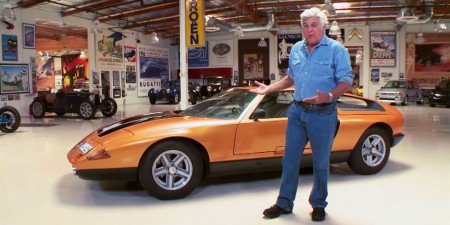 Once they finish checking the exterior and the interior, with its vertical arrangement of the switchers in the central console, off they go.

Behind the wheel of the four-rotor engined C111-II with a 5-speed transmission, Jay Leno takes on the hills of Hollywood.

Trapped between being a vintage vehicle and the super sports car of the future, the C111-II still catches the eyes of the pedestrians and other drivers. “It’s fascinating to see the people’s faces when you drive it”, Leno says.

Towards the end of the drive, the former TV host presses the button that takes the headlights out. “It’s kind of cool”, he brags about his ride, while driving along the Californian hills above the Pacific. “It drives like a modern car.”

“I love closing this door”, the comedian says pulling down the gullwing, before continuing his drive in the Mercedes-Benz C111-II concept car.

He has been dreaming of this car for 45 years. For him, driving it is a dream come true.