The Mercedes-Benz EQC has ditched the usual monochrome camouflage for a funkier disguise in black and blue in Spain. The company’s electric crossover is getting closer to its debut and the near-production prototype is showing it.

The model sports the “switchtoEQ” hashtag and runs on a strange aerodynamically optimized set of wheels. The rear flaunts a red-camouflaged area stretching from one side to another and extending towards the rear fenders, which hints to an LED strip similar to the concept presented last year. 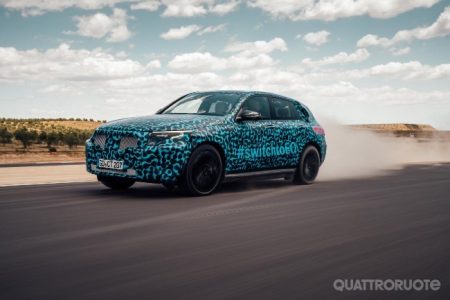 The wrap at the front seems to reveal that the vehicle features a conventional radiator grille, but that is out of the question since we’re dealing with an EV. And as we have already seen at the EQA, the sub-brand’s models come with a glass panel at the front that changes colors according to the driving style of the one behind the steering wheel.

Chief engineer of the EQC project, Michael Kelz, was in command during the testing in the Iberian Peninsula. “With the finishing straight in sight, we are now able to absolve another extremely demanding test programme with our pre-series vehicles,” says Kelz. “But after successfully completed endurance tests in winter at minus 35 degrees C, we are confident that the heat trials will confirm that we are well on schedule for the start of series production.” 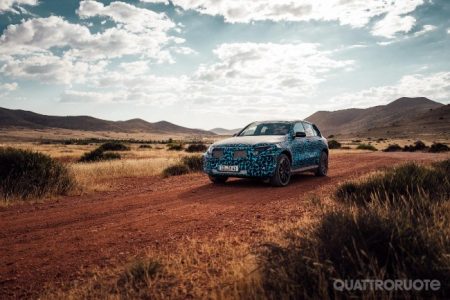 The Mercedes-Benz EQC comes in 2019 to fight the BMW iX3 and the Tesla Model Y in a future world of the premium electric crossovers. If its keeps the specs of the concept, the EQC will be powered by two electric motors of 150 kW, located on each of the two axles, that provide a combined output of 402 horsepower and 700 Newton-meters of torque, making the car accelerate from 0 to 100 km/h (62 mph) in less than five seconds. “It is not going to be an autobahn killer”, says Keltz, explaining that the faster it goes, the more electric current it consumes. No surprise so far.

A lithium-ion battery pack, that is located behind the rear seats, supplies the vehicle with an electric range of approximately 500 kilometers (310 miles).