The Mercedes-Maybach S-Class is the first member of the new Maybach sub-brand and competes directly against the Rolls-Royce Ghost and the Bentley Flying Spur. The newest S-Class member was shown almost simultaneously at Los Angeles and Guangzhou Auto shows.

At the end of 2011, Mercedes announced that they would close the Maybach brand. But at the same time, Dieter Zetsche, the Daimler CEO, promised that the future S-Class range will be larger than ever.

After the long and short wheelbase saloon and coupe, Mercedes is now presenting the S-Class Maybach, a version which has never existed before in the S-Class range.

And Mercedes clearly points out that the Maybach is not an equipment line, but a sub-brand. The press kit says very precisely: “The Maybach is a sub-brand that, in the future, will provide vehicles in an even more exclusive form”.

From this, we assume that we will also see other top luxury versions of the Mercedes models and the first model we think about, that could fit in this sub-brand is the GL.

We would expect an even larger rear door, but Mercedes has found a design trick and the impression is that the Maybach is less massive than the long wheelbase S-Class. Why? The rear door is shortened by 66 mm in the Maybach and has no triangular window. This small window was relocated into the C-pillar. The shorter door and the relocation of the triangular window have one more advantage: the rear seats are placed beyond the door cutout, which creates a feeling of exceptional privacy and exclusivity. All glass areas have chrome surrounds and the B-pillar is also covered in chrome. The elegant Maybach Manufaktur logo – a double M inside an arched triangle – adorns the C-pillars on both sides, meanwhile exclusive 20 inch forged light alloy wheels are available for the Maybach S-Class. 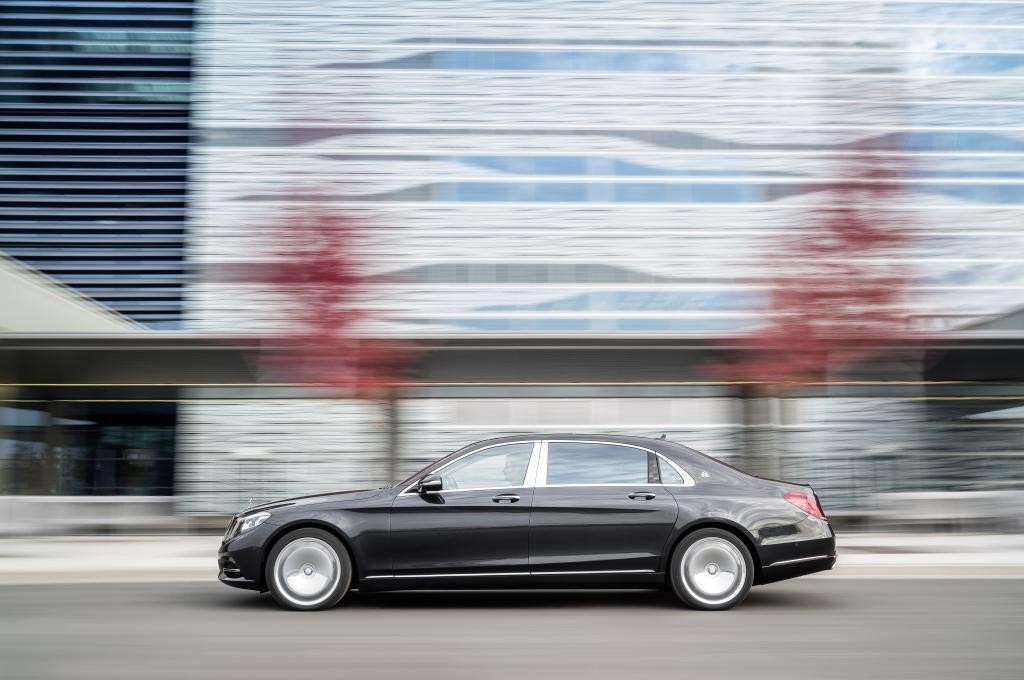 Because the owner of the Maybach S-Class will typically be found in the second row, Mercedes offers the executive seats as standard equipment. The backrest is adjusted separately from the cushion and the backrest angle could be positioned between 19 and 43.5 degrees.

The rear seats and the driver seat are electrically operated from the traditional control panels in the rear doors, meanwhile the rear armrest has a double cup holder, stowage space and wood trim.

A second Thermotronic automatic climate control, with two additional climate zones and nozzles in the central rear console, in the rear footwell and in the B-pillar is fitted as standard.

Mercedes states that the Maybach S-Class is the quietest car in the world, even better than the S-Clas Coupe, despite the large windows.

With a Cd value of 0.26, the Mercedes-Maybach S-Class maintains the leading position in the area of the aerodynamics.

The Maybach S-Class is offered with two engines. Maybach S 600 is powered by the V12 biturbo engine with 530 HP and 830 Nm, already available from 1,900 rpm. This top model accelerates from 0 to 100 km/h in only 5 seconds, meanwhile the maximum speed is electronically limited at 250 km/h.

Like the S-Class, the Maybach S-Class is available with the Intelligent Drive Systems, which include Pre Safe Brake with pedestrian detection, Distronic Plus with Steering Assist and Stop&Go Pilot, Brake Assist Bas Plus with Cross-Traffic Assist, Active Lane Keeping Assist, Adaptive Highbeam Assist Plus and Night View Assist Plus.

Because executive seats at the rear are standard, the seat cushion airbag is also standard.

The airbag is located under the seat cushion upholstery, but on top of the plastic seat shell, which is moved by the seat mechanisms. This means that the airbag is always in the right position, related to the occupant, and prevents the occupant from sliding beneath the belt strap (antisubmarining) in case of an accident.The airbag is only activated if the seat is in the reclined position during a crash.

The seat belt buckle extender is a motorised belt buckle, which can be extended upwards by up to 50 mm and retracted by up to 40 mm.