Daimler has no interest in the 5,680 royalty-free fuel cell related patents recently offered by Toyota. The company’s CEO Dieter Zetsche went even further, attacking the Japanese.

“This is just a PR stunt, clearly inspired by the similar move made last summer by Tesla with their battery patents”, decried Zetsche, according to Deutsche Presse-Agentur. He went on reassuring Mercedes fans “hydrogen technology is at the same level as Toyota’s”.

The statement is particularly interesting. Daimler actually owned a healthy slice of Tesla at the time of the quoted offer, stake which has been consequently sold off last October, Zetsche inadvertently disclosing the tension build-up so carefully hidden by the two companies prior to their break-up.

One the biggest challenges faced by the car industry in its quest to bring Hydrogen to market is achieving systemic change by making CO2-free hydrogen cheap enough for mass production. Daimler has already set a partnership with Nissan and Ford and makes constant progress in this direction, as evidenced by the the autonomous F 015 Luxury in Motion fuel-cell prototype, unveiled in Las Vegas. 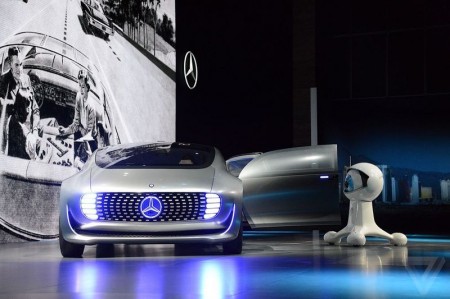 The fuel cell technology is considered environmentally friendly. Hydrogen is converted into electricity, the only waste result being pure water, without a hint of toxic CO2 residues.