It is a smaller S-Class. No, it’s a bigger C-Class. These were the reactions when the Mercedes-Benz E-Class, but it seems none of that. It came into the world as what the engineers name “the most intelligent business sedan ever built”. One year from its birth, the E-Class is still lightyears away from its rivals. But the new BMW 5 Series is breathing down its neck. For the moment, we go for a drive with the Benz.

Fluid and cut in elegance, equipped with technologies snatched from tomorrowland, the Mercedes-Benz E-Class, that premiered in 2016 in Detroit, left everyone dumbfounded when they learned what the car could do. It doesn’t feature some breath-taking design, but it’s drawn by conservatory pencils. It is not conceived to be opulent, but classic in an overwhelming manner. It’s discreet on the outside and revolutionary on the inside, because Mercedes keeps something in mind: the driver lives inside the car. 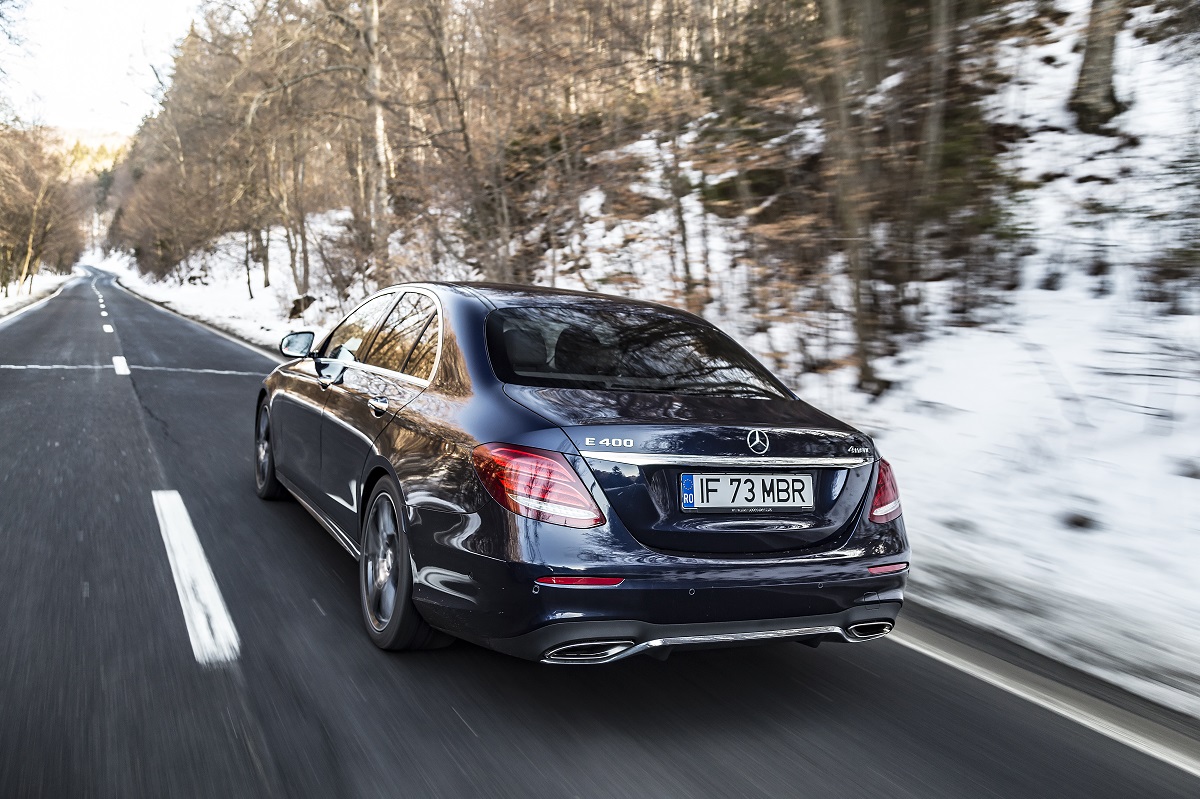 The headlamps with a new light signature bring the automobile an impressive and just as sophisticated pose. From the side, the elongated hood that ends in the so-called “soft nose” make it look as if the sedan starts today and ends tomorrow.

The E-Class that we have tested is the E 400, powered by a 3.5-liter petrol V6 with 333 HP, sent to all four wheels via the 9-speed 9G-Tronic automatic transmission. Too many gears there? Not at all! The transmission makes gazillions of calculations per second and gives you just the right ratio at the right time. Yes, mom, I don’t drive faster than the speed limit. You can’t possibly think that I am on the rush with this car. And besides, it is one of the safest in the world, it is that car that the EuroNCAP crash tests should be stricter for, that mesmerizing car that new epithets should be invented for. 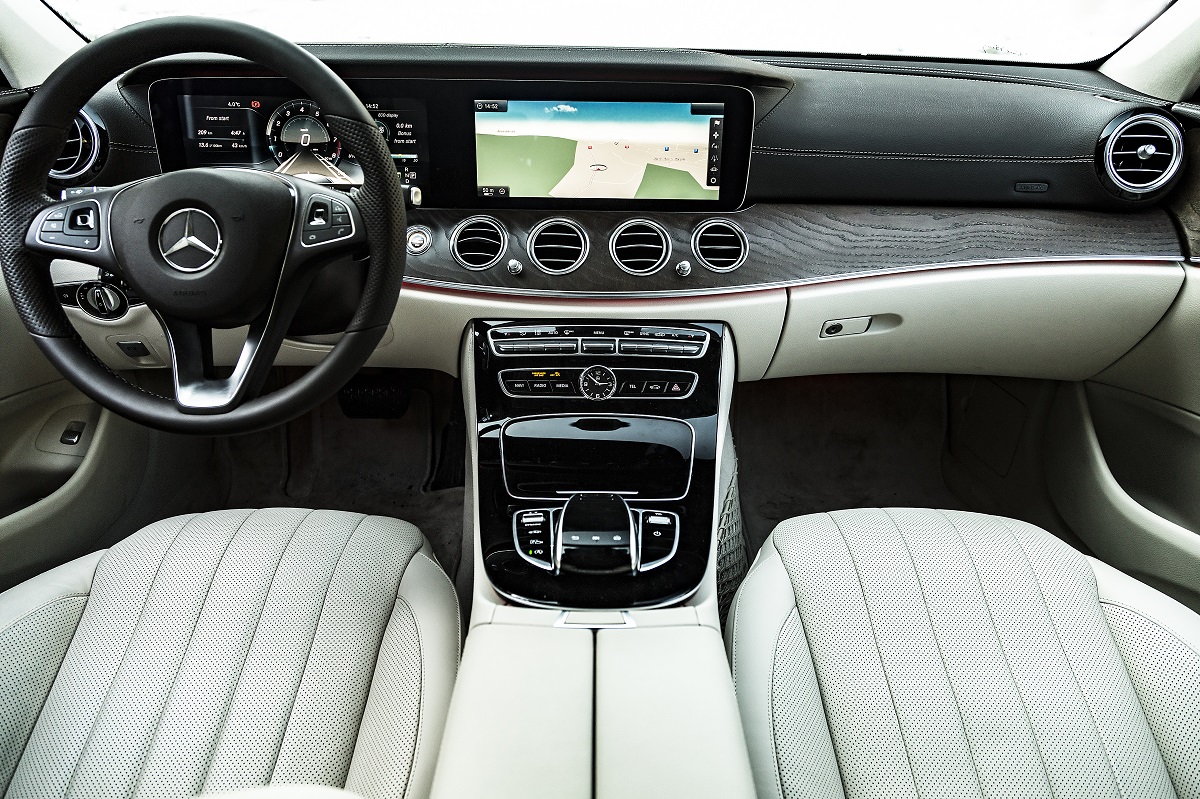 Once you step inside the E-Class, you need a couple of seconds so you can find the words after that “WOW”. E-Class is kind of a Mecca of the businessmen, that get behind the wheel dressed up to the nines. Inside, those fluid lines flow towards the occupants, they wrap them an hug them, but let them space to breathe, they bemuse them and bewitch them. Mercedes makes no compromise and pours wood, aluminium and leather, pretentious and precious materials that make the interior look just like a museum, where you are afraid to even touch the exhibits. The dual screen layout of the dashboard swept onto the windshield, each with a diagonal of 12.3 inches, magnetizes. It looks just like in a science fiction movie, regardless of the way of customizing them: Classic, Sport or Progressive.

The multifunctional steering wheel of the E-Class comes with futuristic features. Sliding motions on the left spoke controls the information provided by the display behind the steering wheel, while the same finger gestures on the opposite spoke command the screen at the right of the driver. Wouldn’t Captain Picard have loved this on-board his Starship Enterprise.

The center console is covered in a glossy plastic that almost allows you to recognize every fingerprint that has ever touched it. The analogue clock in the center console proves that in this spaceship, Mercedes keeps its classic and classy backgrounds.

There are no less than 64 colors for the ambiental lighting. Yes, mother, I know I had terrible grades in Maths! But 64 is correct! 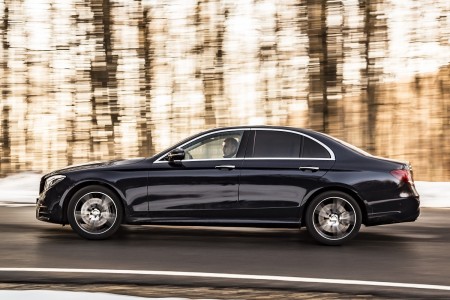 See it to believe it!

And since we spoke of Science Fiction, you must know this is no visual trick. You must know that Mercedes has a reason (or more) to be boast with the sedan they launched last year and which they proudly call “Masterpiece of Intelligence”. With semi-autonomous driving capabilities, the E-Class can detect and avoid pedestrians, it can brake to avoid collisions with other cars, it can keep its lane, keep the right distance from the vehicle in front up to speeds of 210 km/h (haven’t tested that though!), reduce speed and speed back up again once it gets rid of the obstacle. We had to see it to believe it, so the semi-autonomous Benz proved it can even change lanes by itself. No visual effects there either. You activate the turn indicator, the car first makes sure the road is clear and moves onto the selected lane. No, mother, I am not drunk. You know I only go for orange juice and water.

Which one is better, faster, smarter? The Mercedes-Benz E-Class or the BMW 5 Series? You’ve got this to help you decide!

There are features with designations that no driver would ever remember, like Active Brake Assist, Evasive Steering sau Pre-Safe Plus, ready to cut in when the driver fails to make the right move.

You can’t possibly sleep in the driver’s seat though. You must keep your hands on the steering wheel at all times. You are urged to by the car and by the regulations in force as well. If the car asks you to take over and you fail to, it sends warning signals. If there is still no reaction on your side, it activates the emergency lights, it simply reduces speed and safely comes to a standstill.

The E-Class 2017 looks as if it’s the Titanic on wheels, but Mercedes used so much aluminium in it – even the engine block is made of aluminium, to make it 35 kilograms lighter than its forerunner. So the new E-Class, with all its integrated safety systems that weigh heavy on its shoulders, still is a ballerina compared to the car that it replaces. In the Comfort mode, it makes you feel like you are floating, it cancels any road imperfection and lays beneath your feet the flying magic carpet. Or the red one, if you’d prefer that instead.

Check out the rest of the story together with an extensive photo gallery right here, on the AutoExpert wepage!