The visionary people weren’t kidding at all when they said that alternative propulsion will take over the world. A Mercedes-AMG Brabus G500 4×4² was put to the ground by a hybrid Prius. This is what happens when worlds collide.

The accident took place in central London, in the Sloane Street, famous for actually being the territory of the luxury cars.

Supposedly, the 4×4² monster ran a red light and the Toyota hybrid driver was unable to stop in time and avoid the collision. The whole London must have shaken when the over 2.5-ton Brabus SUV hit the ground. 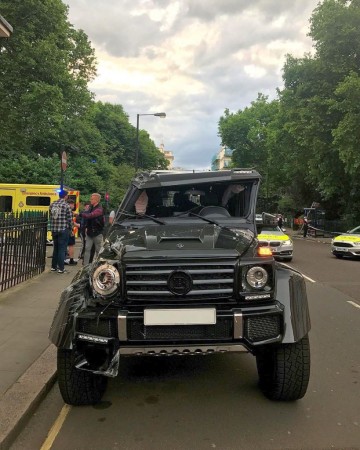 Fortunately, the drivers walked away unharmed, but we cannot say the same about the vehicles. The Toyota Prius ended up with its front bumper and hood badly damaged and airbags deployed. It was reported that the compact hybrid was an Uber car, but the driver was alone at the moment of the crash.

The tuned Goliath has its right side pillars bent and the owner should think of making it a convertible, since the roof is pretty much useless starting last week. The behemoth hit a bus station pole on its way to the tarmac.

Considering that the price of the Mercedes-AMG Brabus G500 4×4² starts somewhere above $200,000 , watch the video below to see how that much money go down the drain: