The world premiere of the Mercedes-Benz Future Bus

This is the Mercedes-Benz Future Bus, the semi-autonomous bus that looks like a VIP lounge on the inside and like a vehicle of the upcoming times on the outside. “It is the most advanced bus that ever hit the road”, say those who built it at Daimler Buses. 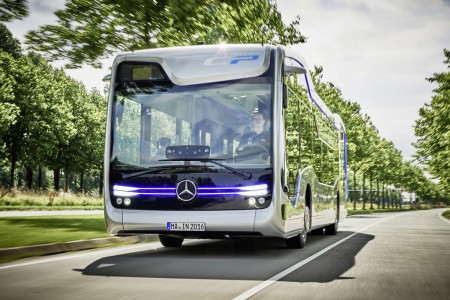 This is the first step to fully automated bus driving. The Mercedes-Benz Future Bus fitted with the CityPilot function, has driven autonomously for the first time on a route of approximately 20 kilometers in Amsterdam. On a section of the longest bus rapid transit (BRT) line in Europe, the bus drives at speeds up to 70 km/h, stops precisely at the bus stops and traffic lights, drives off again automatically, passes through tunnels, brakes for obstacles or pedestrians and communicates with traffic signals. The driver is on board just to monitor the system, but has the power to override them at any time.

Sophisticated radars system and cameras fitted along the bus secure additional driving safety. Wireless connection helps the bus exchange information with the infrastructure, calculating exactly what is set to happen and acting accordingly. The cameras and the measurements taken by them help the bus learn by memorizing the route and locations. 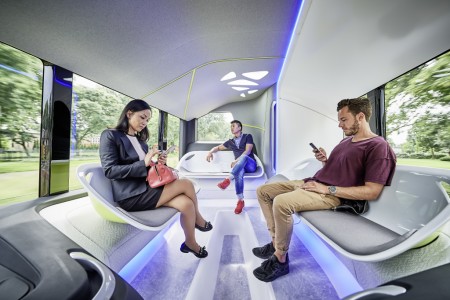 The lights of the bus change depending on its status: in city driving, highway driving or stopping for bus stops. Hence, the Daimler Buses creation targets the urban transportation operators and aims at convincing people to leave their cars at home for a less crowded traffic and more comfortable rides. 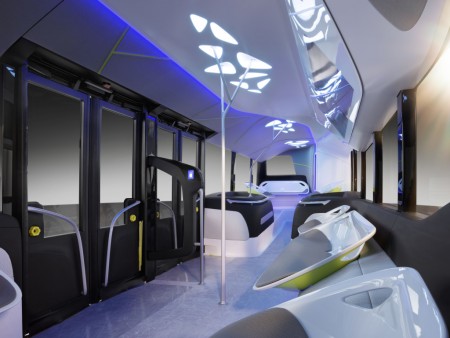 The Mercedes-Benz Future Bus boasts a revolutionary design, with the middle-positioned doors and wide windows with high visibility. The poles inside the bus look like trees and the lights on the roof look like the leaves, emphasizing the relaxing atmosphere inside.

Wide screens located opposite from the mid-positioned doors keep passengers up to date to locations, delays and next stations. The lounge area at the rear are destined for those who travel for a long distance.

The platform of the futuristic Mercedes-Benz Future Bus is that of the already familiar bus Mercedes-Benz Citaro, with the 7.7-liter OM 936 engine, rated at 220 kW and 299 HP. The overall dimensions of the bus are 12135/2550/3120 mm. With the exclusive means of transportation, Daimler Buses marks a milestone on the way to the autonomous city bus.

Seeing is believing, so Mercedes-Benz has also posted a set of exciting videos just to show how the bus of the future works once it hits the road..