Mercedes-Benz A 45 AMG facelift has been uncovered. Design-flourishes aside, the refreshed baby-AMG gets a significant power boost. Of course, take all this with the customary grain of salt.

Leaked to the web via Instagram, the exclusive image shows minimal revisions expected to widen the visual gap between the Mercedes-Benz A 45 AMG and its casual siblings down the range. Modifications include a distinctively shaped new front-grille and apron coupled with new LED headlights and subtle aerodynamic tweaks like the carbon-fibre finished fins/ornaments.

But the biggest news seems to be the addition of a ballistic Mercedes-Benz A 45 AMG S version. In-line with its bigger brother, the Mercedes-AMG GT S, the top-of-the-range S model is set to take the power-war to the next level compared with the regular model. If total power for the standard A 45 AMG will reach 381 HP, its more potent brother is credited with no less than 400 HP. Thankfully, 4Matic all-wheel drive remains standard.

With an output of 367 hp, the Audi RS3 is currently the most powerful hot-hatch but that’s clearly about to change, if the reports are correct.

The turbocharged 2.0-litre petrol four-pot powering the A 45 AMG will remain largely unchanged with Mercedes-AMG engineers relying exclusively on altering turbo-pressure and admission settings in order to upgrade the already potent engine. 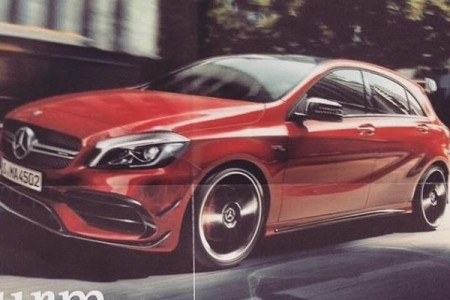 The redesigned A-Class will be unveiled later this month while the public debut is set to take place this September, at the Frankfurt motorshow.