This Mercedes driver was pulled over by a policeman and had no idea what he had done wrong. But his fault was so obvious. He was transporting three armchairs with his Mercedes-Benz saloon through the capital of Scotland, Glasgow.

The three leather armchairs were one in the trunk, another one halfway to the roof and the third was kept still between them. All of them were tied with a blue ribbon-like rope onto the headrest of the driver’s seat, making the load even more unstable.

Probably conducted by the proverbial Scottish greed, the 49-year old driver was reported for overload and other driving offenses by other drivers and eventually pulled over. Wanting to spare the money and not calling on a transportation company, the man decided to move the furniture himself. 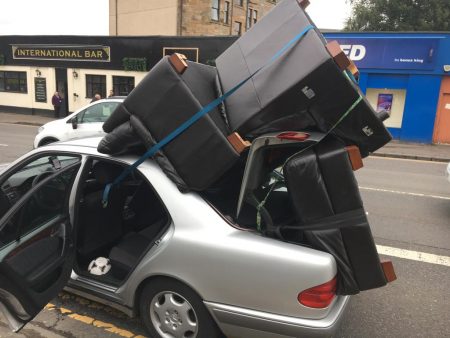 The Glasgow police posted the photo of the absurd fright-Benz on Twitter and the comments are marvelous.

“It’s the football that probably got him pulled over”, says a user. “Was going to say this wouldn’t look entirely out of place in Florida!”, another one jokes. “Could’ve got another 2 X 5 seater lounges, coffee table, plus matching side tables and display cabinet to fit. No wonder they got booked!” is one of the ironic suggestions for the driver that got busted.

The Scottish police mentions no financial penalty for the case, but instead claims the policemen gave him advice for the proper transportation of such pieces of furniture.

You may also want to read: