The winemaker and the historymaker: Mercedes-Benz SLC Pagoda

Meet Piergiorgio Castellani, a sixth generation winemaker. He takes us on a ride through the most beautiful places of Tuscany in a 1973 Mercedes-Benz SLC Pagoda Hardtop, during a sunny afternoon.

The Benz was a present for his wife, Chiara, for their tenth anniversary.

“I saw the car parked in front of a mechanic’s shop. I asked about it and the price was acceptable. I immediately had the car restored and bought it in a good state”, he tells the story and he giggles. He did everything in ten days, very fast, yet trying to keep it a secret from his wife.

“The day of our anniversary, I parked the car in the middle of my garden and when my wife came home, she found this amazing vintage Mercedes as her exclusive personal dream car!” 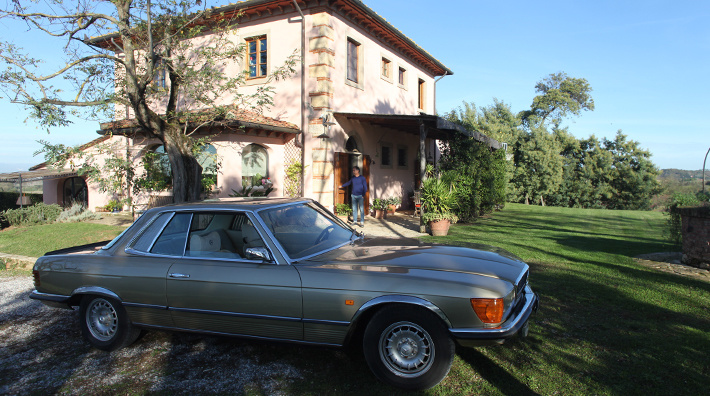 And it is still a dream car, but not so exclusive now. Piergiorgio Castellani simply fell in love with the present for his wife and nowadays, he drives it more than she days. He needs to check on his vineyards and there is no better way to do it with more style. Signor Castellani says the car perfectly matches his hobby:

“The color, it’s a clear golden color, better known as champagne, that only Mercedes has.”

The car features fur interior covers and a tape deck to give that vintage sensation he longs for, while driving along the winding roads of Tuscany.

The winemaker thinks of the car as a time machine. “The smell, the colors, the shapes, the sounds are all from the 70s. Driving on contemporary roads, you can rediscover the rhythm of that time”. 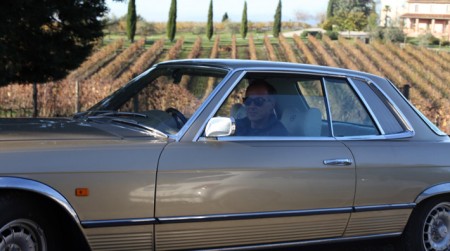 But the car also goes into the off road, when he gets closer to what is the source of income for generation after generation for the Castellani dynasty: the vineyards.

Signor Castellani is definitely not a hipster, so, instead of choosing a pick up truck or something to fit a surf board, he simply plants the surfboard on the hard top and drives to the Mediterranean coast. Buona sera, Italia!