Valtteri Bottas fought hard for his 100th Formula 1 race, holding on to his second spot after a made race. Lewis Hamilton finished fifth, but ended up fourth, following Max Verstappen’s time penalty.

The Finn was a few laps away from a win, but his worn tires forced him to give in and let Daniel Ricciardo have his way. The Aussie simply ate up the distance that separated him from all the drivers at the front. 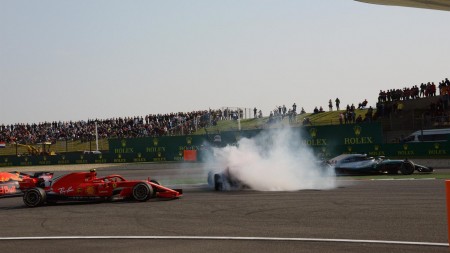 Starting from pole and after two wins in two races, nothing seemed to stop Sebastian Vettel. But the Safety Car deployed after Toro Rosso’s Pierre Gasly crashed into teammate Brendon Hartley at the hairpin on Lap 30 of 56 and scattered debris all across the racetrack. Under the Safety Car, Red Bull decided to call both drivers to the pits and give them soft tires. It was the moment that decided the entire race.

Verstappen though pushed his luck trying to overtake Lewis Hamilton, but all he did was run off track. On his attempt to recover what was lost, he bumped into Ferrari’s Sebastian Vettel at the hairpin.

Meanwhile, his teammate had all the right moves in China. The Aussie passed by Hamilton, Vettel and Bottas in a heartbeat and powered off to secure his position at the top. 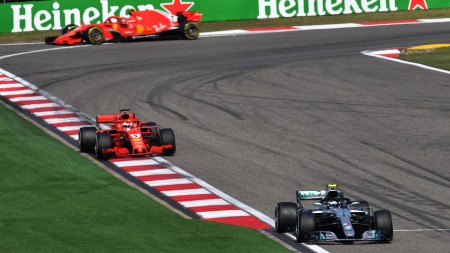 Valtteri Bottas got his second position once again, after the one in Bahrain last week. It was Ferrari’s Kimi Raikkonen who completed the podium, followed by Verstappen, but the Dutch dropped into the fifth as he was given a 10-second penalty for having hit Vettel. Lewis Hamilton went up to the fourth.

In the overall ranking, Vettel’s lead goes down to nine points over Hamilton, while Bottas stands at 5 points back. In the Constructors’ ranking, Mercedes holds its ground with a one-point advantage over Ferrari. Things could turn clearer in two weeks’ time, at the Azerbaijan Grand Prix.