While waiting for the Black Series, a digital render shows just how mean the Mercedes-AMG GT R can look

“Very wide and ridiculously low”. These are the words that describe the model in a tweet posted by JDM Car Renders. While waiting for the Black Series, we get a glimpse of a widebody Mercedes-AMG GT R.

The Black Series machinery is still far from showing up, even though it has been caught testing by spy photographers more than once. Until the ultimate GT arrives, JDM Car Renders sweetens the wait with a digital render that displays a widebody Mercedes-AMG GT R.

A lower grille, a front spliter that seems glued to the ground, wide air intakes, expanded wheel arches, new sills are a few of the digital modifications the extreme GT R that can be seen in the photos. 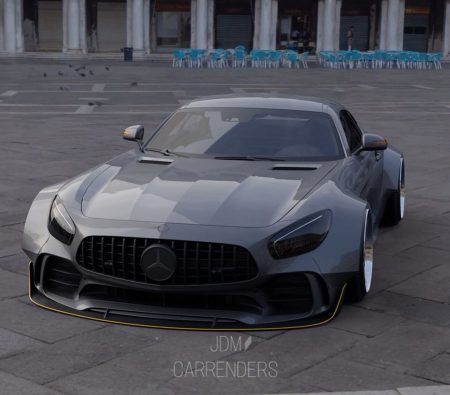 A glimpse of the rear shows that the active aero wing has still kept its ground. There is a more aggressive air diffuser and a central tail pipe has showed up in the mid-section of the diffuser.

If this virtual variant became real, it would be fitted with a new suspension and air springs that position it closer to the ground.

The so-called Beast of the Green Hell, introduced in June 2016, when Formula One World Championship Title holder drove it himself around the racetrack, is the most extreme of the range, but it will be exceeded in output and meanness by the future Black Series, that, with a plug-in hybrid system integrating the 4.0-liter V8 and an electric motor, should go anywhere above the 700-horsepower milestone.

The Black Series is expected to be revealed before the end of the year and hit the showrooms in 2021, unless the coronavirus pandemic has other plans.