The old VW T5 was launched in 2003. 12 years later, VW came with the new T6, which is not really new. In fact, the new T6 is an enhanced version based on the existing platform also used for the T5. While Renault and Mercedes built completely new generations of the Trafic and V-Class models, with 10 cm additional crumple zone to pass the requirements for pedestrian crash protection, VW didn’t do it. 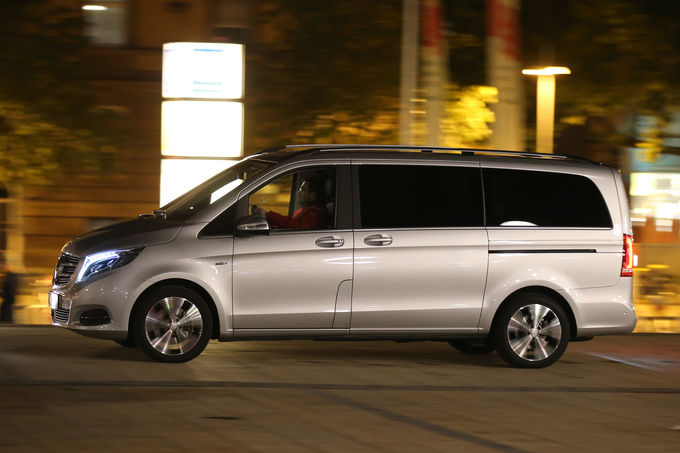 But the old form of the T5 has a lot of advantages in terms of space. Despite being 24.8 cm shorter than the V-Class, the new Multivan offers the same amount of space like the V-Class. Anyway, there is an explanation for this result: the VW Multivan features a transverse engine, combined with the front wheel drive, while the V-Class sports a noble configuration with longitudinal engine and rear wheel drive.

The higher Multivan also offers a better versatility. The rear seat bench can be moved on the rails without requiring, as previously, to fold down the backrest. Folding tables, sun blinds and the optional coolbox are traditional for the Multivan and so is the possibility to transform the second and the third row in a sofa bed.

The two individual seats in the second row can rotate and lock on the entire rail sector. By contrast, the four rear seats of the Mercedes V-Class can only move five centimeters forward or backward. Mercedes explains that the restriction of the position is connected with the ideal position related to the windowbag in case of an accident.

VW claims that it is now more convenient to take out the seats when you need a bigger cargo space, but  the operation is not easy, due to the fact that the seats are still heavy. Both models offer very good comfort for all seats, but the Mercedes cockpit is much closer to that of a big limousine, while the six generation of the VW Multivan sports a pragmatic dashboard. 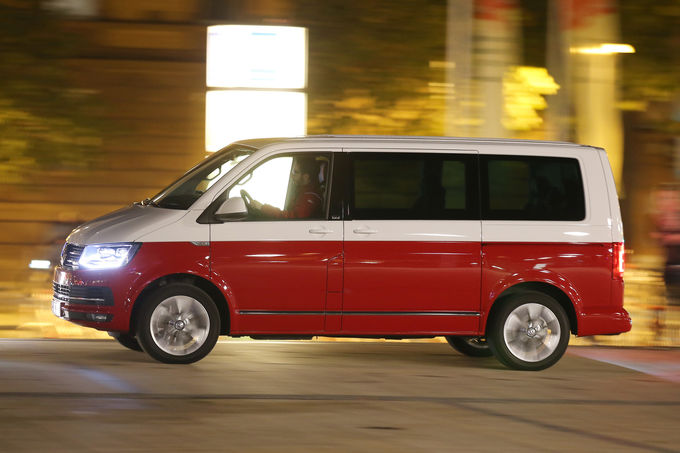 The new VW bi-turbo diesel engine belonging to the EA 288 family starts gently and pushes ahead vigorously thanks to the maximum torque of 450 Nm, already available from 1,400 rpm, and to the very quick seven speed dual clutch transmission. Mercedes is being more circumspect. It starts with a small hesitation, because of the classical automatic seven speed gearbox, but then it passes softly through the seven gears.

The VW is also more agile. With the new adaptive drive train, the VW Multivan has a lower body roll in bends, the steering is more direct and precise, while the Mercedes understeers earlier and the ESP reacts earlier as well.

VW also significantly improved the comfort of the Multivan, thanks to the adaptive drivetrain. In the Comfort mode, it is as good as the Mercedes V-Class, both at minimum and maximum payload.
The two stage adaptive shock absorbers in the Mercedes offer a better comfort over long bumps, while the Multivan passengers seated in the third row feel the bumps in their seats.

It was a big surprise to see that the Mercedes V 250 d Avantgarde Edition is better equipped with the electric sliding doors, the adaptive LED headlights, navigation system and leather upholstery.

The Mercedes won the test by a very small point advantage, but it deserves the victory only if we count that it is a completely new model, while the VW is a refinement of a well proven architecture.

Those who understand German, can read the full test here.