What will Mercedes bring to the Guangzhou Motor Show?

Mercedes-Benz plays its best cards at the Guangzhou Motor Show this month, as China represents the premium car maker’s most important market. A brand-new Mercedes-Maybach SUV is on the list.

The first Mercedes-Maybach SUV will celebrate its world premiere on the eve of the show. Five years ago, the Mercedes-Maybach S-Class was revealed there. The SUV, similar to the saloon, will feature state-of-the-art technology and Maybach-specific luxury equipment. There will be generous space at the front and especially at the rear.

At the Mercedes-Benz stand, there shall also be the new Mercedes-Benz GLB, that recently scored five points in the safety tests performed by EuroNCAP. The compact SUV also made its debut in China, half a year ago, in Shanghai, as a concept. 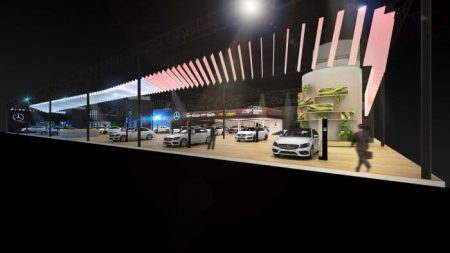 The GLS SUV, the company’s biggest and most luxurious, and the Mercedes-AMG A 35 L 4MATIC, with a 6-ccentimeter longer wheelbase compared to that of the standard variant, will be there as well for their market launch in China.

Mercedes will also show the company’s new take on electric mobility, the Vision EQS, also shown this fall, at the Frankfurt Motor Show.

The newly established electric brand DENZA, belonging to Daimler and BYD, will also display a new model in Guangzhou. Designed by the China Advance Design Center, the DENZA X will be available in plug-in-hybrid and battery-electric variants, exclusively on the Chinese market.