What is the Mercedes-AMG Project ONE taking so long?

Delay after delay for the Mercedes-AMG Project ONE. Teasers though suggest that the time of the official presentation is inching closer. But why is it taking so long?

The Mercedes-AMG Project ONE should have reached its new owners by now. But Mercedes failed to deliver the company’s first series hypercar. The limited edition model was already sold out. But those who paid €2.75 million plus VAT to get one are still waiting impatiently.

There are several reasons that the car with Formula 1 tech has not yet hit the road. One is the change of leadership at Mercedes-AMG. Tobias Moers said goodbye to the Affalterbach-based manufacturer to join Aston Martin, after Andy Palmer stepped down. Mercedes-AMG appointed Phillip Schiemer as a replacement last May. Schiemer brings new strategies and perspectives. The public debut of the Project ONE hypercar does not seem to be a top priority. 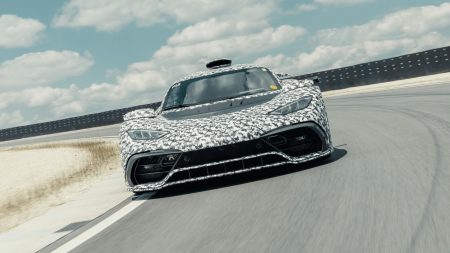 According to MBWorld, the hypercar faces yet another problem. The model gets the 1.6-liter V8 internal combustion engine and four electric motors. One for each front wheels, one for the turbocharger and one for the crankshaft. The power system carried over from the Formula 1 racing cars should deliver at least 1,000 horsepower.

But there is an issue in terms of emissions regulations compliance. The internal combustion engine idles at 5,000 rpm. For the vehicle to comply with the emissions standards though, it should come with a stable idle at 1,200 rpm. This gives the engineers quite a headache.

Mercedes-AMG Project ONE shows up in teasers

Following the end of the 2020 Formula 1 season in November, Mercedes showed Lewis Hamilton driving the supercar. He is supposedly one of the future owners of one of the 275 that the sports car manufacturer will build.

Further photos with a prototype running around the racetrack were released a month ago. The public debut though is yet to happen.