What a tight situation! Mercedes sandwiched by buses in London

We all knew London was packed with residents, tourists and automobiles turn it into one of the most cramped cities in Europe. But we never expected it to be in such a… tight situation. A Mercedes-Benz driver found it out the hard way.

Two double-deckers – dubbed Boris Buses – rear and front-ended a Mercedes-Benz in Goodge Street in central London. Two people were treated by the paramedics, but none of them had life threatening injuries.

The photos of the Mercedes sandwiched by the buses were snapped by Richard Beltran, who works near by, and posted on his Twitter account. 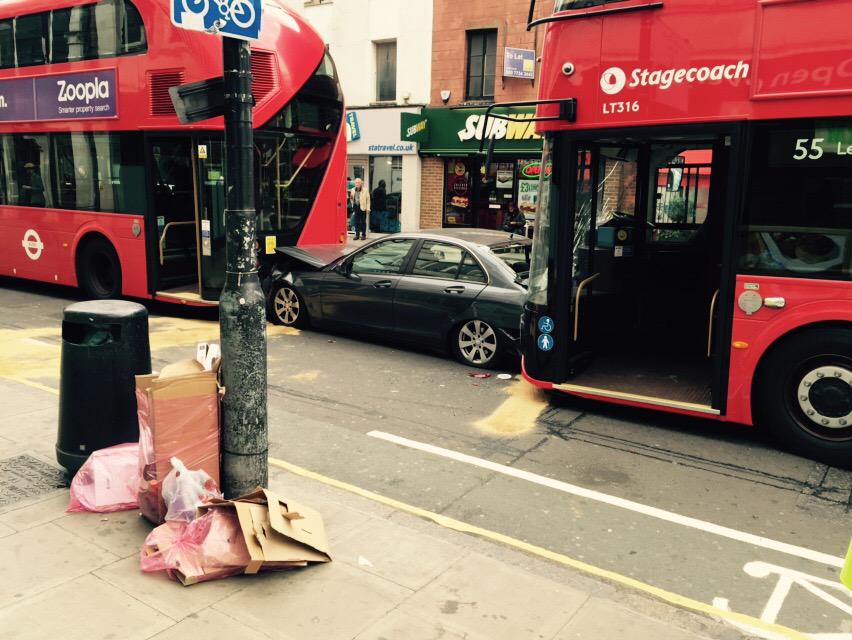 The car that look like a write-off was a grey Mercedes-Benz C-Class, that seemed to operate as a minicab. Even though it does not show clearly in the pictures, it is reported that a fourth vehicle, an Audi TT was also involved in the crash. The sports car was bumped hard enough to bump a meter ahead of the bus that hit it from behind. Due to impact, the bus had its windshield broken.

An eyewitness says that at one point, only minutes after the collision happened, there were 15 buses stuck in queues, before the Metropolitan police chose to divert them to other routes. The accident forced the closure of the road near the junction with Tottenham Court Road. It took four hours for clearing the scene. 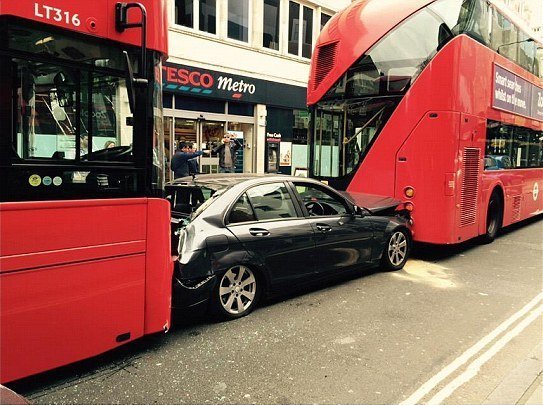 Officers, London Ambulance Service and London Fire Brigade attended. The driver and passenger of a Mercedes were treated at the scene.

So let’s sum up: we’ve got two buses, a Mercedes-Benz C-Class and an Audi TT. That was quite an expensive pile-up, wasn’t it?