Mercedes-Benz launched the all-new Vito Taxi service in London. The vehicle guarantees unrivalled levels of space and refinement for the driver and for up to six passengers and it also provides wheelchair access.

“We know that the London taxi fraternity has been waiting in anticipation for us to bring the new Vito Taxi to market – our previous cab took the industry by storm and has sold in excess of 3,000 units since its launch in 2008,” stated Steve Bridge, managing director of Mercedes-Benz Vans. 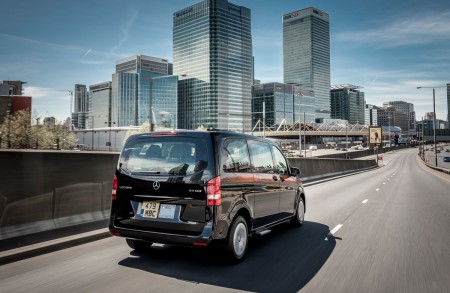 With a compact body length, the Vito Taxi is just the right vehicle for the Public Carriage Office, being able to perform a U-urn in London’s narrowest streets.

The Vito cab is standardly fit with an engine start-stop function, electric folding mirrors, electrically-operated sliding doors on both sides and an electrical steps to facilitate access and for the full comfort of the passengers, the seats are wrapped in leather.

Customers that have their eyes set on this new model can benefit from a 3-year unlimited mile warranty, 40,000 km service intervals and the MobiloVan roadside assistance for three years.

“The new Vito Taxi is quite simply a game-changer in every sense of the word. I look forward to hearing the feedback of how it is improving the fuel-economy and comfort for our hard-working professional drivers”, Steve Bridge added.

More than 3,000 examples of the previous London model have been delivered to customers since its introduction in 2008. Mercedes is counting on a similar success with the new model, sold in the United Kingdom for prices starting at £47,000.