Welcome to Norway – Fjords onboard a Mercedes-Benz vintage bus

In front of such a glorious show of nature, one can only tip his hat to it. Picturesque fjords, thundering waterfalls and bizzare glaciers. The best way to see the breath-taking panorama is onboard a panoramic Mercedes-Benz O 319 small bus with a big ego.

Norway. The lands of the fjords, the skies of the aurora borealis. The sublime place where heavens open up to the mortal kind. Such views of colors and light can also be seen in the city of Bergen, where time appears to have come to a standstill. The roads, the buildings, the customs, the life have hardly changed since 1900. 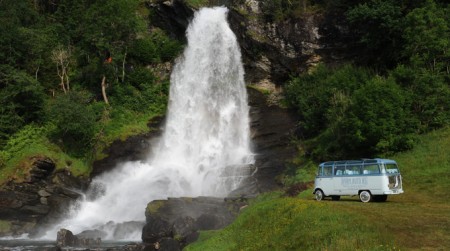 The Hardanger Fjord is the most spectacular of them all. Those who have seen it will remember it forever. To reach the remote place, tourists need to drive along an amazing road with scenic spots. For Arvid Ove Vikør, his O 319 Mercedes-Benz panoramic bus is the best way to do it. The only way to do it. Being the owner of a workshop in Norheimsund, specialized in Mercedes-Benz cars, he must know it like no one else does.

“It’s like a reflex”, says Vikør. “People start to smile when they see this creation approaching.” We understand their reasons, especially when they see the pretty blond girls with bright smiles, all wearing traditional Norwegian costumes, onboard the vintage bus.

Arvid Ove Vikør found his O 319 as a wreck in someone’s garden. The bus had been built the year he was born, 1964, so he instantly must have thought of bus bearing the three-pointed star in the radiator grille as a good sign, as a… Northern star. It took him 20 years to restore it. But when he hears the happy rumble of the 68 HP engine, he feels it was worth every single day and every penny. 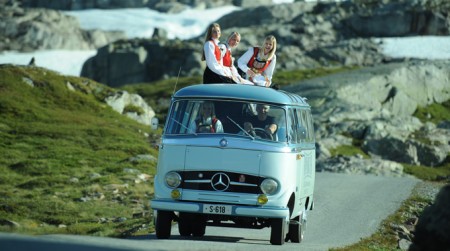 If he had to choose between his 51-year old bus and a super car, Vikør would not hesitate for a single moment: “I much prefer my bus!” he says with a smile, as if he hid the biggest secret in the car industry. A driver and a tour guide on the Hardanger Fjord, Vikør knows all the right spots for the best photography sessions.

The Steindalsfossen waterfall near Norheimsund is surely one of them. Walking behind the curtain of water is like stepping into another world and shutting the civilization out. Tiny lanes at the edge of the fjord, with just void and waves of the North Sea on one side are also a highlight for those who come accompanied by the connoisseurs.

The O 319 bus strives its way through to the Folgefonna glacier. For the Benz small bus, the road ends here. For the tourists, putting on climbing boots with crampons, another adventure unfolds.