Way to go! Daimler Trucks sold over half a million trucks in 2015

The Daimler trucks are going the right way. The truck manufacturer reached the target it has set eyes on for many years: over 500,000 vehicles sold worldwide in 2015.

Back in 2014, Daimler had to stop shortly before reaching the company’s goal, at 495,700 vehicles. But 2015 brought even more challenges, with important markets like Brazil, Turkey and Indonesia collapsing.

“Thanks to our leading products, we will deliver one of the best years in the history of Daimler Trucks despite some very challenging markets. This is a great achievement by our global team. I thank all employees for their outstanding efforts”, says Dr. Wolfgang Bernhard, member of the Daimler Board of Management, responsible for Daimler Trucks & Buses.

The heavy division from Daimler is now setting its next target: 700,000 units sold in 2020. “To sit back is not an option for us. We remain focused on the implementation of our strategy. We are also expanding our global presence and will get even closer to our customers with six new regional centers”, Dr. Bernhard promised. 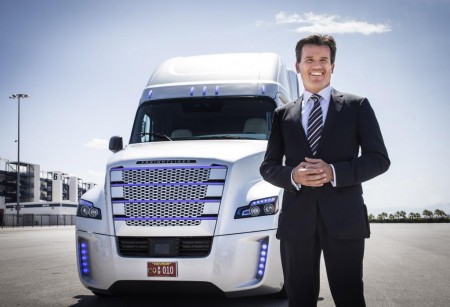 The NAFTA region has definitely driven the global increase. 176,100 units were delivered there between January and November 2015, since customers are starting to admit the benefits of the integral powertrain of the Daimler trucks, with the DT12 automatic transmission system being a key to that success. More than 40% of Freightliner Cascadia and Western Star 5700 XE units are now sold with automatic transmission systems – around twice as many as in 2014. To meet the growing demands of the region, the DT12 transmission system has been produced locally, in Detroit, starting November 2015. From 2018, medium-duty engines reserved for the NAFTA market will also be manufactured in Detroit. Daimler is investing around 450 million euros.

Western Europe also marked increasing sales for the first eleven months of 2015, with 56,000 delivered to customers, with the sales growth pace obviously growing along the year. Despite the financial issues, Turkey managed to surpass the high level of the previous year (18,900) to 20,400 trucks from January to November 2015.

The downturn in the Brazilian market strongly impacted the whole Latin America unit sales, showing a decrease to 27,900 units for the first eleven months. The Brazilian customers purchased only 15,200 vehicles, instead of 2014’s 31,300. To help the market grow, Daimler will be investing half a billion euros in customized products, technologies and services in the Latin American production network between 2014 and 2018.

The Asian markets showed ups and downs during the past year. In Japan the FUSO brand increased sales by 4 percent to 41,600 vehicles. At the opposite end, there stands Indonesia, where sales dropped to 29,400 units. The Indian market saw an increase of 29%, up to 12,500 vehicles.