With this new Passat, Volkswagen is knocking on the premium segment’s door more than ever. We asked a C 250 BlueTEC 4MATIC Mercedes-Benz to answer and see what the newcomer has to say for itself.

The Volkswagen Passat has always been the kind of car with the toe of one foot firmly set into premium territory, and that seemed to be okay with the rest of the segment dwellers. Slowly, though, the foot kept creeping forward and now the unsuspecting posh cars have a serious new contender on their hands – one that also packs quite a punch, but more on that later.

Volkswagen doesn’t market the new Passat as a true premium car, and nor should they – continuing the whole toes and feet theme, that would mean stepping on Audi’s shoes, the VAG brand currently fighting it off with the likes of Mercedes-Benz and BMW. Cannibalism is never a good marketing strategy, everybody knows that and everybody tries to avoid it as much as possible.

Instead, the Volkswagen Passat is a midsize sedan that can appeal to a very broad range of customers, from company fleets and medium income families, all the way to the wealthy executives. It’s got something for everybody due to three equipment lines and a hefty list of extras that can put it on par on almost every aspect with similar models from BMW, Mercedes-Benz and, indeed, Audi. 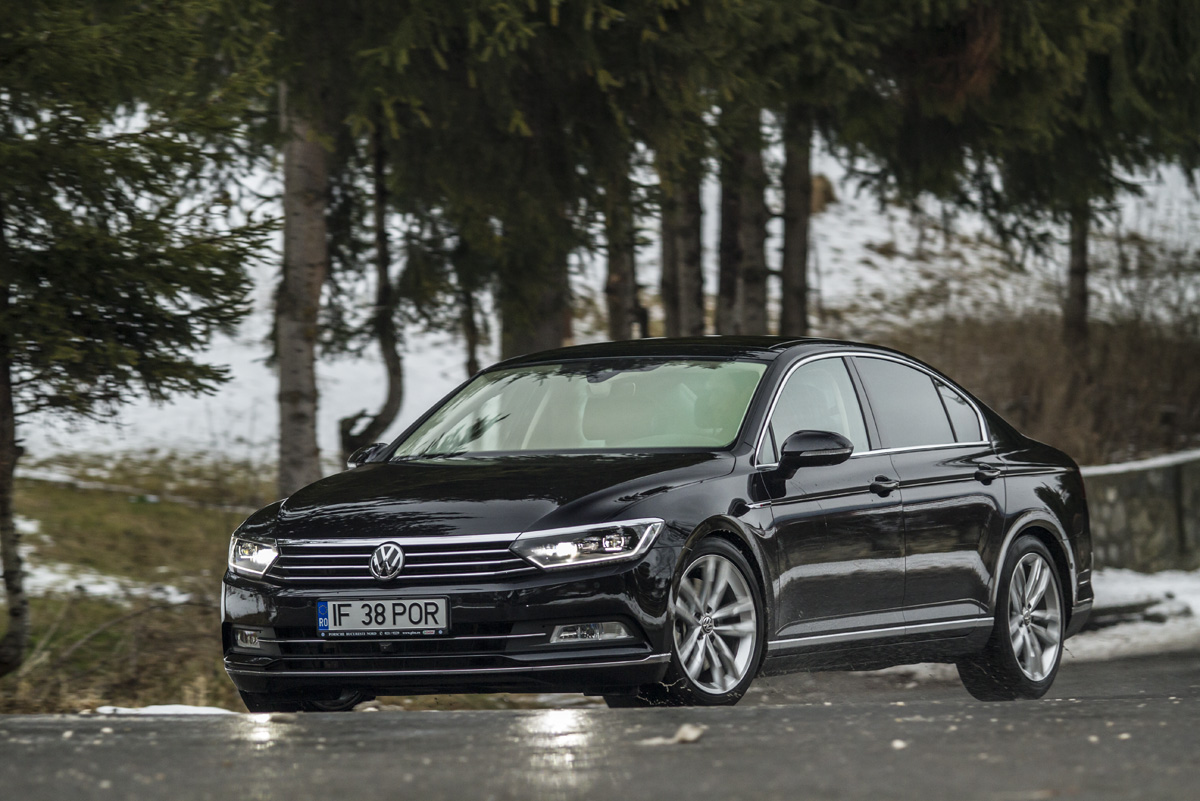 Our test car was what you would call “top of the line”. It was a HIGHLINE model with the 2.0 BiTDI (bi-turbo) engine developing a whooping 240 hp and 500 Nm (the fore mentioned punch), eased through to the four wheels via a 7 speed DSG 4WD transmission. This setup is, without a doubt, the best 2.0 liter diesel engine and gearbox combination available at the moment.

But – because there always is a “but” – you don’t really feel all that power when you’re driving the car. There’s no debating it’s monstrously potent, but it also seems a bit tame, like a kid who’s been made king and doesn’t really know what to do with his newly gained power. It might have to do with the high seated position or the engine sound, I don’t know, but it definitely doesn’t feel like you’re sitting over 240 hp. Not 240 hp that actually know what they’re doing, at least. 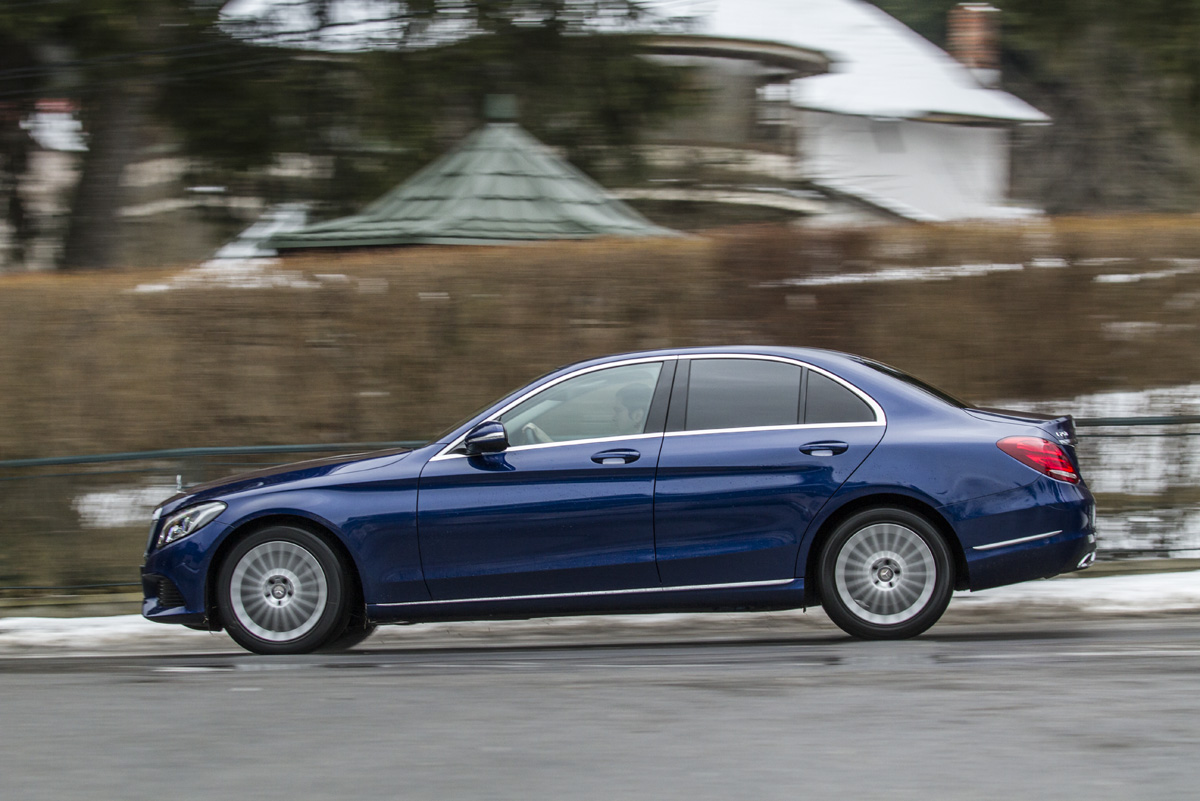 The Mercedes-Benz C 250 BlueTEC 4MATIC on the other hand “only” has 204 hp, but it’s got the exact same amount of maximum torque: 500 Nm. I won’t say the Mercedes-Benz is faster, since that would be a lie (0-100 km/h takes 6.3 for the Passat and 6.9 for the C 250 BlueTEC), but I will say it feels faster. The throttle response is quicker and the engine sound is a lot more rewarding while the gear changes of the 7G-TRONIC are a perfect match for those of the Passat’s DSG, being just as quick and sharp. Simply put, the Mercedes-Benz is a whole lot sportier than the Passat, an observation which immediately had me thinking: if it trails on sportiness next to a C-Class, how would it have fared against a BMW 3-Series?

So I’ve already mentioned the high seated position in the VW. Well, that’s not entirely true. Yes, you do sit higher in the Passat than in the C-Class, but that’s only because the Mercedes is millimeters away from scraping your ass on the tarmac. Outside of this comparison, the VW’s position would best be best described as “normal”. The seats, too, are more on the comfy side and don’t offer that much lateral support, which makes sense since the car’s handling won’t be enticing you to skip from corner to corner at high speeds either. The steering is soft and distant even with the “Sport” mode active (the differences between the settings are very hard to feel) and the steering wheel itself is rather thin and uninspiring. Don’t be fooled into thinking that by getting the 240hp BiTDI engine you’re actually buying an all round fast car – no, it only applies to the straight bits like motorways and long express roads. 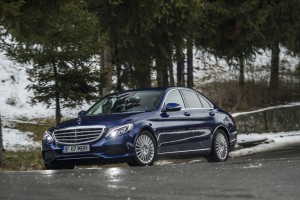 It’s a different story with the Mercedes. Everything makes you want to go fast: the gripping low seats, the thick, heavy steering wheel, the meaty steering feel, the quick response of the front wheels, the eagerness of the whole car to please you when the road ahead becomes interesting. Again, most of these aspects would have passed as nothing out of the ordinary, but here they are duly highlighted by their absence in the Passat. The C-Class (in the C 250 BlueTEC form) is not what you would call sporty, but it definitely is sportier than what Volkswagen has to offer. You’re starting to get the idea, I think.

Same story with the suspension. In Comfort mode, the Passat is soft and wobbly, bouncing around on the freeway as if it were riding on oscillating sound waves. It’s doing its job of dampening road imperfections, but it’s not doing it very quietly and makes a big fuss about every negotiated bump and pothole. It can get pretty tiring after a while. Put it in Sport mode and you will immediately feel the dampers stiffen – no, you won’t, and if by some chance you think you’re detecting a change, you’re either hypersensitive, or it’s something similar to placebo.

It’s pretty much the same story in the Mercedes. It has an agility toggle that lets it cycle through settings like eco, comfort, sport, even sportier and individual, but the differences those make in terms of suspension feel are marginal, if not nonexisten. Yet, the C 250 BlueTEC is clearly better under any circumstance: it’s stiffer and more assured when cornering, it’s quiet over bumps and it’s a lot more composed at high speeds on the freeway. 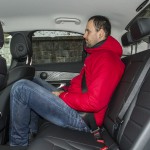 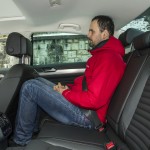 The Volkswagen Passat scores big time when it comes to interior space, which is kind of odd since it has a shorter wheelbase than the Mercedes. But it is what it is and if you often take people (you care about) on the backseat, the Passat would be the better choice. It’s also got the bigger boot trumping the C-Class with no less than 100 liters and it also has a split folding rearseat backrest. Is it the more practical car? I guess you could say that.

It’s not the better looking, though. Not by a mile. Don’t get me wrong, I think the new Passat is actually quite beautiful and feels like it’s been designed by people who actually care about what it looks like, for a change. It has a more aggresive stance, it’s wider and shorter, it looks clever and mean and it should appeal to a whole new range of younger buyers. The interior is pretty clean with the champagne colored metal strip on the dashboard reminescing a hi-fi system. There is plenty of plastic and not all of it good, falling short of its premium promise. The plastic in the Mercedes is of slightly better quality, but it’s not perfect. The dashboard layout looks considerably better with cleaner, airier surfaces and more attention to the employed materials. The all digital cluster in the Passat can get a bit too crowded at times which makes reading the information displayed a handful; the Mercedes uses a more traditional approach and all the better for it. 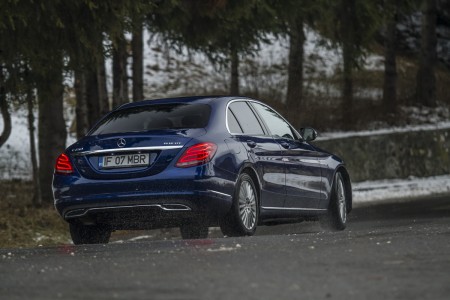 And then there’s the exterior design of the C-Class. This car is simply gorgeous and I’m pretty sure it will still be a few years until people will cease to turn their heads and just ignore a passing C-Class. There’s the „wow” factor and then there’s the „holy shit” factor. Put these two cars side by side and apart from size and the four wheels, there’s very little they have in common. The Volkswagen is all angular, boxy and menacing in a cold, robotic kind of way; the C 250 BlueTEC is quite the opposite, with curvy shapes and flowing lines that add up to form one of the most beautiful silhouettes in the automotive industry. The new Passat is a very big step forward in terms of design (and all those involved received my most sincere congratulations), but it’s still a few huge leaps behind the C-Class – sorry, it’s just the way it is. 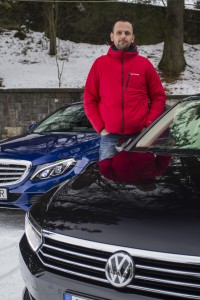 And we’re down to the gritty part: money. The starting prices for both models are somewhere near 45.000 euros, which is a lot. It is especially a lot for the Passat, which is actually one thousand euros more expensive than the C-Class. Switch to the 190 hp 2.0 TDI engine, though, and it becomes over 2.000 euros less expensive than the Mercedes. But then it also loses what is probably its single selling point over the Merc, apart from the plus in interior and boot space. The new Passat is a valliant attempt from Volkswagen to poke inside the premium segment, but it just falls short of achieving its goals. Had it been less expensive, it would have made a great alternative for the well established brands in this rarefied segment, but as things stand right now, you still feel a bit cheated when paying well over 50.000 euros for a (admittedly extremely well equiped) Passat. When you spend all that money, you’re not buying boot space and 40 odd extra horsepower. It’s all about perceived quality and sadly, thet’s where the Passat falls a bit short. I would still have the Mercedes any time of the day and not because I’m a pretentious snob, but because it’s the better car. Better looking, better driving, better everything that matters.

If you want to buy a Passat, by God, do it. It’s a wonderful car. It’s just not ready to take on the established premium brands yet. It’s almost there, but not quite. As things are, I doubt anyone who was set on buying a Mercedes or a BMW will actually stop and ponder the new Passat. I know I wouldn’t, not for more than a few seconds, at least.