The Vision Mercedes will be on display at the Design Essentials 2019, taking place in Nice. It represents sculpture depicting the heritage and future of the luxury brand and, at the same time, the transition to anew era of design and technology.

It was the spring of 1901 when, at Race Week in Nice, a car never seen before, made it way on the starting grid. It was developed by Daimler-Motoren-Gesellschaft and it was the idea of visionary Emil Jellinek. The Mercedes 35 PS, named after Jellinek’s daughter Mercedes, appeared with a completely new vehicle architecture and dominated the competitions in Race Week, from Nice to La Turbie. More than a century later, now lays the Mercedes-Benz International Design Center Europe. 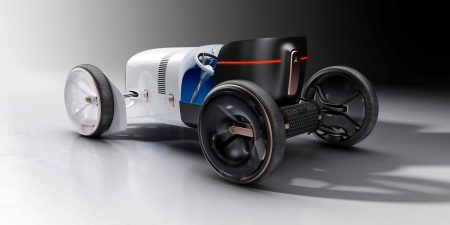 The vehicle transited from the design of the motorized carriage to that of an automobile, with technical basics that still remain in all cars. The Vision Mercedes Simplex of today recalls the historic race and brings the style of the era into the present.

The Vision Mercedes Simplex is now a two-seater. The body of the vehicle sits as a monocoque amid the four large wheels, which form the outer points of the vehicle. The iconic vehicle featured a radiator grille in bronze, while the one of today comes with a radiator frame in rose gold. The surface inside is in the form of a large lens-shaped Black Panel/3D display, showcasing the “Mercedes” lettering digitally superimposed. It also shows animations that provide information on the status of the vehicle. 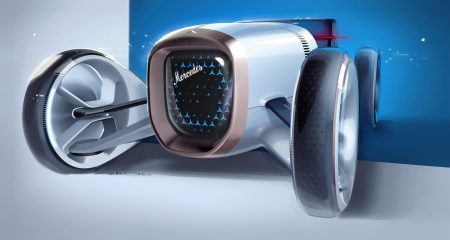 The designers have skipped the windscreen, as on the legendary model. At the opposite end, a leather bag in a modern interpretation, completes the looks of the vehicle that is both old and new.

The interior is a digital homage to the model from 120 years ago. The User Experience reflects the holistic approach of the Mercedes-Benz design philosophy. The driver is only shown precisely the information they actually require in the specific driving situation. 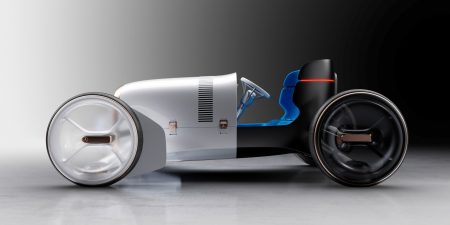 The clock in the instrument panel, the precision screws and the belt design reveal the inspiration from the naval field. The bench seat is inspired by stylish furniture, while the cabin breathes the classically luxurious handcraftsmanship. The colors of Côte d’Azur inspired the interior color scheme.