BMW M5 versus Mercedes-AMG E 63. The classic duel is now in its fourth round with new generations of both super saloons gracing the world in 2017. FIRST VIDEO COMPARISON TEST courtesy of AUTOCAR.

For the first time BMW uses standard four-wheel drive in the segment. Why? Because the 600 hp on tap can only be adequately converted to the road via 4WD. This means: safe, efficient.

At Mercedes, the same philosophy prevailed years ago. The rear-wheel drive purists worldwide have become the minority. In terms of propulsion, both manufacturers have chosen a bi-turbo V8 with power in excess of 600 hp. BMW has also given up the usual DKG double-clutch gearbox in favour of an 8-speed automatic with torque converter, while Mercedes uses a similar transmission but adds one extra gear to the mix. Neither contender features roll stabilization or rear axle steering. According to manufacturer specs, the E 63 weighs 1,880 kg, little more than the 1,855 kg of its Bavarian rival. Subjectively, the new M5 does feel lighter and more agile on mountain roads and in tight bends. 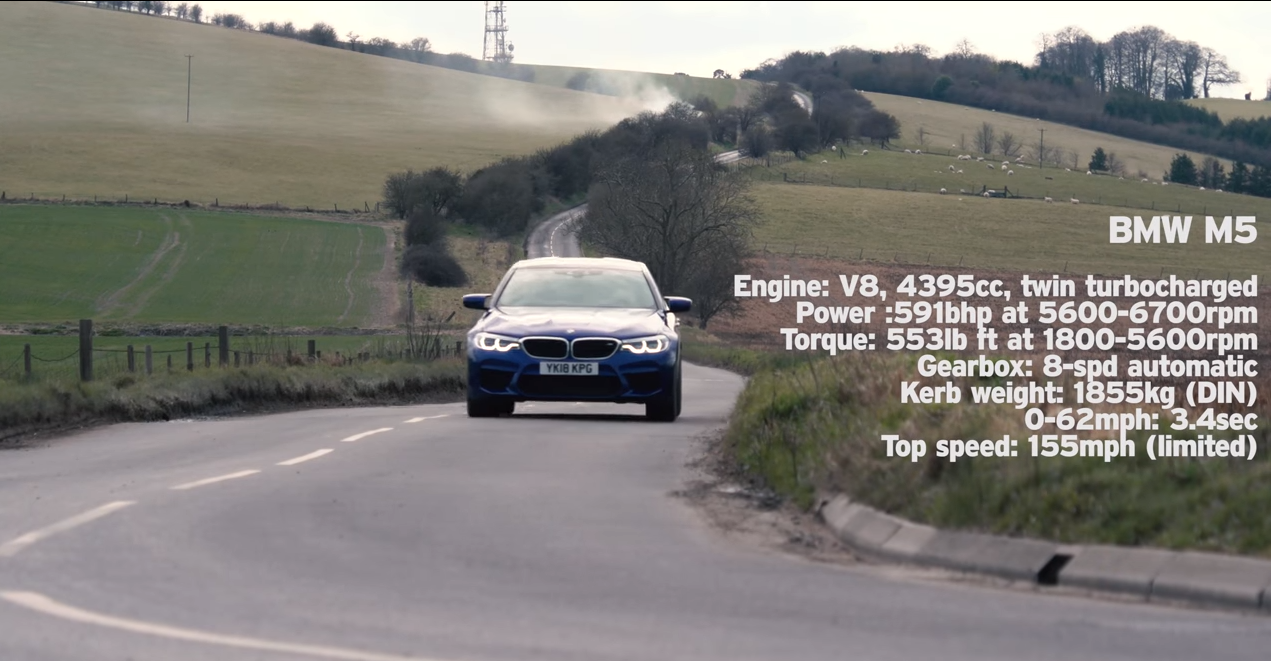 With the M xDrive 4WD sistem, BMW has developed a drive concept that covers an unusually broad dynamic range, from 4WD to 2WD. In normal conditions, the M5 is a pure 2WD sedan. Only when driving conditions become tricky, the front axle switches on – progressively, imperceptibly. If you prefer a crisper response, choose the 4WD Sport mode which in combination with the M Dynamics mode (MDM) gives the M5 a more rear-biased torque distribution, which allows light drifts. Without DSC, 4WD Sport significantly increases the car sporting behaviour in terms of lateral acceleration, steering precision and driving pleasure. But, if you want the purest sportiness, activate the 2WD mode and experience the traditional character of the M5 unfiltered.

Both German manufacturers build 600 hp super sedans for older customers with a lot of money. Surprisingly, not superior performance nor top comfort seems to be the top priority, but the personalization of the complex driving modes. The dark, enjoyable side of the car’s soul, hidden in the submenus, may only be found after a deep search. Take for example, the drift mode of the E 63, in reality nothing more than a specifically selectable and configured rear-wheel drive mode. Already in Sports mode the rear wheels give (with the ESP off) an early smoke signal. For AMG, the highlight of the choreography is the Race mode. In this setting, the driver determines the switching sequence and the degree of performance limits, but only up to 120 km/h. After that, the front axle is activated again and encourages clean, safe driving. The M5 however knows no speed limit in the 2WD mode, which is a blessing in disguise in fast corners where you can play hooligan and exit faster in a big drift.

The tires of the M5 simply stick to the road, build more grip and react more smoothly at the limit of grip. AMG has set the E 63 S a bit more aggresively with a combination of the three chamber air suspension, slightly harder dampers and negative camber. This does help handling, but the closer the AMG approaches the limit, the more one-sided the tire will be restrained. Smoke and drama is there, but the set-up is more on or off, instead of the better balance in the BMW.

BMW claims the new eight-speed automatic has the same shift times as the previous seven-speed DKG, all this without the snap of your neck because of the brutal upshift whip of the old double clutch unit. Conceptually, Mercedes ups the ante with its nine-speed gearbox by adding a wet clutch – the BMW still uses a torque converter only. Both cars are closely matched on paper, sprinting in identical 3.4 seconds from 0 to 100 km/h. In the 0 to 200 km/h sprint, the M5 takes the lead with 11.1 seconds, compared to Mercedes’ 11.5 seconds. The close match is also reflected in the test consumption: 17,4 versus 17,2 liters/100 km. With 600 hp and 750 Nm the BMW engine is eclipsed on paper by the 612 hp and 850 Nm strong Mercedes-AMG E 63 in S guise. But an even stronger M5 Competition is already announced for 2018. 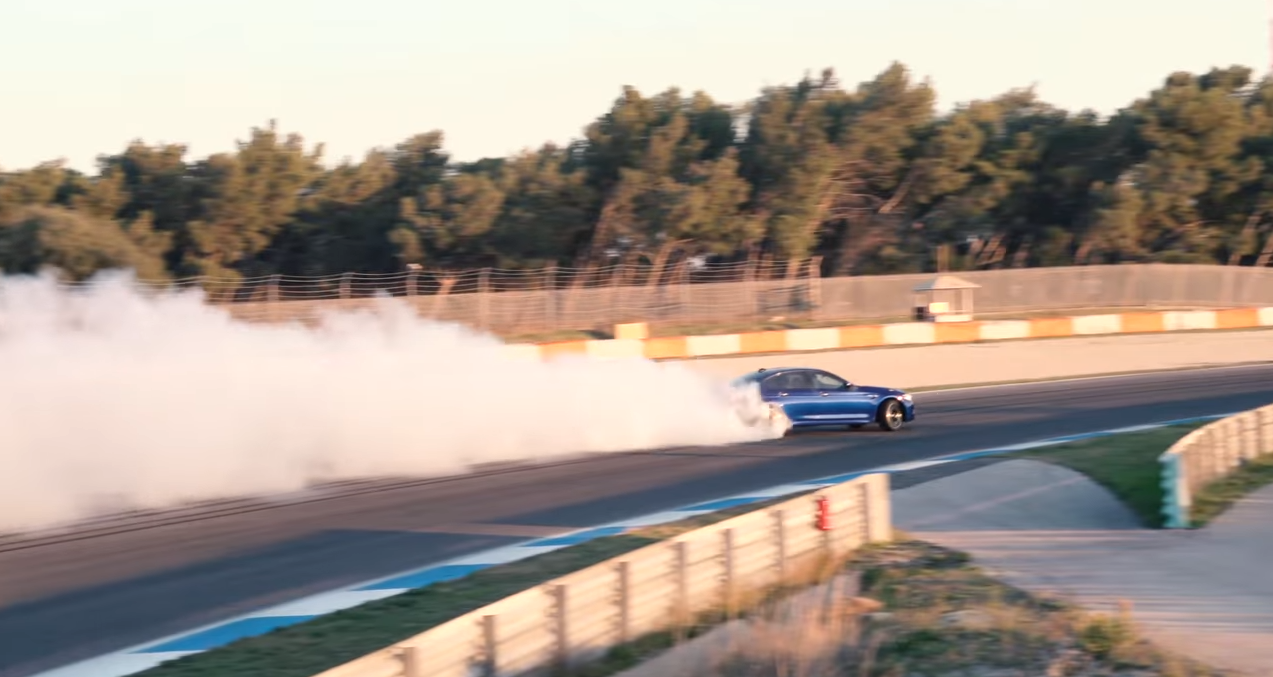 In regular road traffic, the expensive carbon-ceramic brakes barely come up to the right temperature, with their action further delayed in the rain. However, on the race track, these come alive and it is not much about absolute deceleration values as it is about durability: non-existent fading effect and great consistency of pedal pressure. The balance in the combined deceleration and steering ratio is sensational in both cases – you just have to learn to brake late.

And now the steering chapter: The electro-hydraulic unit of the M5 shines with precision, balance and agility. Steering angle and holding forces work in perfect harmony. In the E 63 S, the steering does not fare as well. In addition to the higher self-centering effect, more effort is required for steering and less fixed reactions are observed on corrective maneuvers. Nuances maybe, but they sure count in this comparison test.

Both the BMW M5 and Mercedes-AMG E 63 S are 600 hp plus street monsters and only in a direct comparison do these above subtle differences become clear. After a tie for drive and braking and after a slight plus for the BMW steering, the chassis chapter is won by the Bavarian super sedan. The pricing doesn’t help Mercedes-AMG either, as the M5 costs 117,900 euro in Germany, while the E 63 S will set you off a cool 122,427 euro.