A very rare 582 HP Mercedes CLK DTM AMG Cabrio is for sale at a price of supercar according to german magazine AutoBild.

To celebrate the victories from the German Touring Car Championship (DTM) at the beginning of 2000s, AMG, the sport division of Mercedes-Benz, released a legally road version of the racing CLK. Named CLK DTM AMG, it was produced in only 200 units, from which 100 were coupes and 100 cabrios. The price of the coupe was around 236,000 euros, while the cabrio costs 277,000 euro, a very low price if we take in consideration the limited number of units produced.

Both variants were equipped with the supercharged 5.4 liter V8 taken over from the SL 55 AMG which deliver 582 HP and 800 Nm. A V8 with mechanical compressor in a C-Class means top class performance. CLK DTM AMG Cabrio was the fastest open-top four-seater in the world at the moment of its launch with a top speed of 300 km/h electronically limited and an acceleration from 0 to 100 km/h in only 4 seconds.

All 200 units were sold immediately after the launch and the CLK DTM AMG became a very rare collection object. For this reason the prices goes higher, much more above the acquisition price.

Auto Bild magazine find out a Mercedes CLK DTM AMG Cabrio for sale at Mechatronik, a Mercedes dealer located in Stuttgart.
The car was registered in 2006, has only 4,970 km on the tachometer, was regularly maintained and is in a nearly mint condition. according to the announcement. 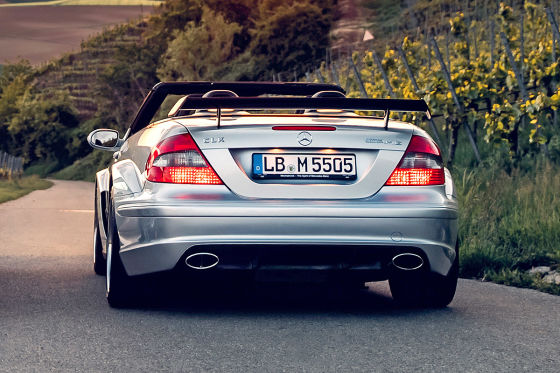 The car has the look of a CLK but the front apron with the powerful air intakes and the front 19 and rear 20-inch alloy wheels arouse attention. Not to mention the imposing rear spoiler made of carbon fiber and the superb sound. The interior is based on the DTM racing car: bucket sport seats with excellent support, the steering wheel covered with Alcantara, aluminium pedals and the white-backed instruments.

We drove a CLK DTM AMG Coupe in 2003 on the track and the engine with 800 Nm torque is really impressive. The answer of the engine at low revs is a reference  also for the 500 HP sport cars from today.

Compared with the regular C-Class, the steering is very short and direct which creates a higher pleasure to drive. I wrote at that time that CLK DTM AMG is more pleasant to drive than the Mercedes SLR McLaren which has some 44 HP more. The CLK DTM AMG is more agile, much more practical for  every day use and the steering is much better than the Mercedes SLR McLaren.

The price of 324,900 euro asked by the dealer is only around 45,000 euro more than the original price. And we say that it deserves every euro. It is a nice collection car but also a very nice to drive car.