Valtteri Bottas is selling his Mercedes-AMG GT, boss Toto Wolff is driving one

Mercedes-AMG Petronas driver, Valtteri Bottas, is selling a Mercedes-AMG GT. Meanwhile, Team Principal Toto Wolff is driving one. What is the reason of their choices?

The Finn that came to Mercedes as a replacement after the retirement of then-World Champion Nico Rosberg, has driven his way to success. Valtteri Bottas has been fighting for victory of top drivers, including his record-holding teammate, Lewis Hamilton.

On a daily basis, Valtteri, in his fifth year as a Mercedes driver, is nothing like his very expansive teammate. A discrete person off the track, Valtteri is pretty much involved in charity actions. This explains why he is now selling his Mercedes-AMG GT S. 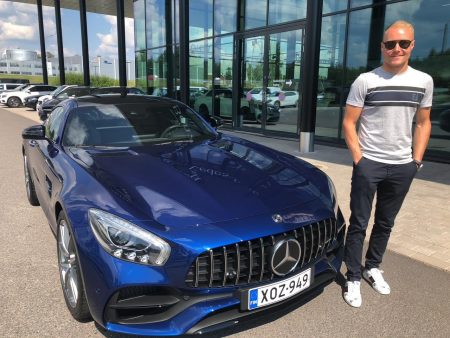 How much is Valtteri Bottas asking for a car similar to the one Toto Wolff is driving?

He paid €230,000 for the car with a 4.0-liter twin-turbo V8 engine. And he is now selling it for €190,000 ($230,140). The price includes a karting day in Valtteri Bottas’ company, at the Pippo circuit in Lahti. That is actually the destination of most of the money that the Finn will receive for the car. The sum will go for the redevelopment of the karting track, where the now-F1 driver started his racing career.

The car for sale has covered 16,000 kilometers (less than 10,000 miles) and wears the Metallic Blue paintwork.

While Valtteri Bottas is trying to sell his blue Mercedes-AMG GT S, his boss, Toto Wolff, is driving one in Solarbeam Yellow (check out the PHOTO GALLERY). Team Principal of Mercedes-AMG Petronas drove the sports car on a business trip to Zurich. It is not such a long drive from his home in Switzerland. Ermatingen, where he and his family live off racing season is only 50 kilometers away from Zurich.